This appeared in the May 2015 edition of Northwest Boomer and Senior News.

This Eugene musicians hit the road and lived out his dream. 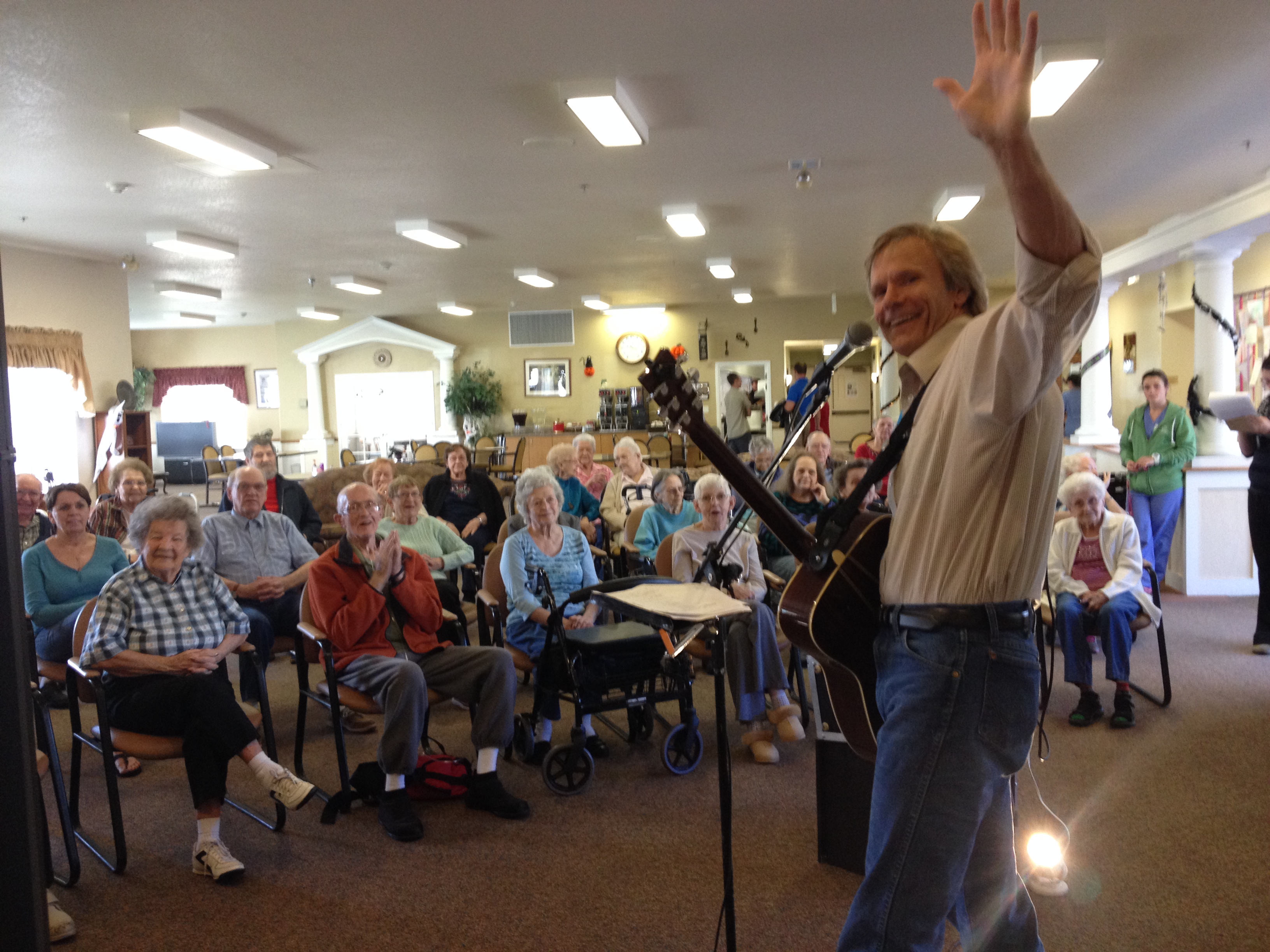 Timothy Patrick entertains guests at an assisted living center on his trip across the United States. Photo courtesy of Timothy Patrick

Timothy Patrick is tall, lean and youthful looking. And sitting in a coffee shop wearing jeans, a button up shirt and a blazer, he has a certain casual cool that makes sense when you find out he makes his living as a musician. “What keeps me looking young?” he laughs. “Music and good living. And good genes, too. My mom looked pretty young.”

While he does play nightclubs on occasion, he’s found a niche in playing primarily for boomers and seniors. Patrick recently returned from a 5 1/2-month tour playing to senior communities as far away as Cape Canaveral, Florida. “I do close to 20 shows a month at senior communities,” he says, “and they’re for all levels—the independent livers, the assisted living, the residential living, the rehab care and the memory care. I play them all.”

Patrick, 62, grew up in Pendleton, Oregon, and moved to Eugene in 1976, following his first wife. He worked as a youth supervisor for the City of Eugene’s recreation services for 33 years and retired from that in 2009.

His parents got him a guitar when he was 15, but it wasn’t until his 30s when he realized he had enough songs in his repertoire to play for an audience once in a while. In 1984 he bought a PA system and he and his second wife started a band they called Riffle, which still plays to this day, although Patrick is the only original member. “Everybody else moved on to other projects or got tired of performing,” he says. “It’s a lot of work.” In a twist, the first bass player for Riffle, Anthony Proveaux, moved to Phoenix for many years but is now back in Eugene and playing with Riffle once again.

Patrick plays as a solo act and in a duo called Patrick & Giri with another guitarist named Peter Giri. “He’s a pretty remarkable player,” says Patrick. “He used to be in a band called Cowboy that opened for the Allman Brothers for 3 years on the East Coast. He was in that period when bands were coming on like the Eagles and Poco. There was this kind of melding of rock and country and it was called country rock.”

The two guys also play in a trio called Teresa, Patrick & Giri with a saxophone player named Teresa Cunningham. “Our music is all over the place,” Patrick says. “And the bands are all kind of unique presentations but there’s a lot of crossover in terms of he music that’s played. It’s the classics like Van Morrison’s “Moondance,” “Your Mama Don’t Dance” by Loggins and Messina, some of the jazz standards like “Summertime. We try and get a feel for what the audience wants and we have a big enough repertoire that we can do that.”

It was Patrick’s father, who lived in a care facility in Medford and now lives in Eugene, that indirectly got him started on the senior gigs. While Patrick was visiting him in Medford, a nurse remarked that his dad said he played guitar and that he should bring it his next visit. “I did and they liked it,” says Patrick. He did that a time or two and quickly realized three things: He liked doing it, he needed more material, and there was a need for this type of entertainment. Many facilities do have entertainment budgets, because so many of the residents can’t get out to activities. “This is one of my motivations,” he says. “I know a lot of these people can’t get out. Like my dad, he only goes to the doctor so if people don’t bring entertainment to them they don’t get it.” And, he says, not all of the entertainment the facilities bring in is particularly top-notch.

“I sincerely enjoy serving that audience and I think they can pick up on it because I am one,” Patrick says, about being a senior himself. “And indeed, in some of the residential facilities and rehab facilities there are people younger than me.” While watching the faces of his older audience members, Patrick says he thinks of his mother and father, his grandmother, and himself some day.

Now, Patrick has a repertoire of 10 themed programs that he can play at any time that include him playing guitar, singing, telling jokes and stories and projecting images on a screen. He keeps it fun, although there are some heartfelt moments in his programs that occasionally lead to tears. “I have to look away when people start to cry,” Patrick says “Otherwise I’ll start crying too!”

In February his program is called “Love,” in March it’s “A Wee Bit of Irish Fun,” and in December he does “Season’s Greetings.” For one, called “Cowboy,” Patrick dresses in cowboy boots and hat and starts out playing images of the west. Then his first song is “Don’t Fence Me In.” “That song has about 25 images to it some of which are timed, some of which I have to control with a foot pedal,” he says. “It’s timed to support what I’m doing and if I want the audience to sing with me then I project the images, so it’s a really rich way to connect and people still love to sing.”

His “Love” show has close to 400 images scripted along with stories and jokes. “I’m always modifying the shows, trying to improve upon them, and that really sets me apart as an entertainer in the local community because as far as I know I’m the only one doing this multimedia thing.”

When he qualified for social security last year, he decided that the time for the tour was “now or never.” He bought an RV and trailer and set off, leaving Eugene September 1, 2014 and returning February 13, 2015 for a tour he called “As the Crow Flies.” He called communities six to eight weeks in advance and booked his gigs, sometimes playing two or three shows each day. “I would call and say, ‘I’m coming to your community on this date range, would you be interested?’ and I was batting about one for six, so if there was 30 places in a town I’d get five shows.”

Patrick played more than 80 shows while on the road, and in a typical year at home will play well over 200. He slept in 43 different cities in 22 different states. Patrick says from a performer’s perspective, playing for the seniors is a rewarding experience. “Because they’re really listening to you,” he says. “Sometimes when I play for younger audiences they can be sitting right in front of you and they’re all on their iPhones. Older audiences respect the notion of performance and it enables me to communicate with them and bring them into the show and make them a part of it.”

He didn’t break down or get ill while on the road, and the only bad parts of it were that he nearly turned around twice from homesickness and missing loved ones and he had to cancel a string of shows in musical hotspots such as Nashville, Chicago and Memphis due to the harsh winter weather called “The Polar Vortex” that hit that region. “That broke my heart,” he says, “because as a musicians I had always wanted to go to Nashville.”

He didn’t make any money, especially after you add in buying the rig and trailer, but he gained invaluable experiences and a treasure trove of memories. “I met a lot of wonderful people wherever I went,” he says. He spent several days in some cities—Cleveland for 7 days Boise for 5, Tucson for a week, Phoenix for 5—enough to do some exploring. “Everybody I came in contact with, especially after I shared with them that I was a musician on the road, they were so kind and so helpful and they all wanted me to explore something in their community, whether it be a restaurant, a favorite bar or nightclub or a park or a mountain. They all had some place that they said, ‘Oh you’ve got to go.’ It gave me time to get to know the community.”

He thinks he’ll do a tour like that again, but in smaller chunks. “I would do it again,” he says. “No regrets. I did develop as a player. I think I’m a better musician now—I know I am—as a result of this trip. I’ve also got this storehouse of great experiences and memories.”

Another thing he learned was that in comparison to other cities out there, Eugene is a wonderful place to be. “Great people, great weather, great water, great food, great culture,” he says. “There are so many wonderful things about it and there is a wonderful music scene here. I went to large cities with music scenes that pale by comparison.” 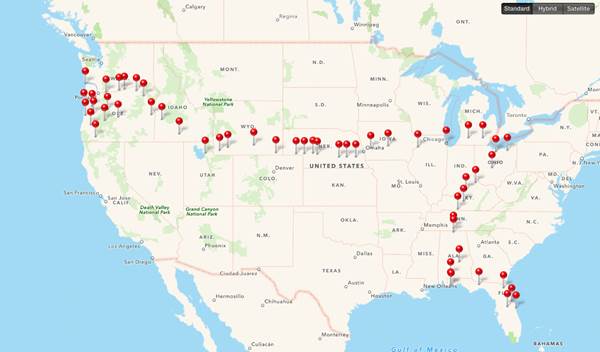 One Response to Timothy Patrick: A Singer for all Ages