By Vanessa on July 11, 2018 in Art and Artists, Boomer and Senior News 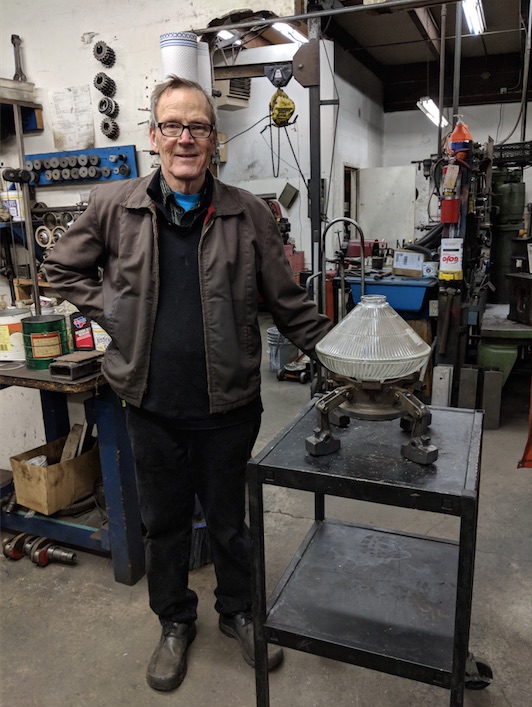 Stephen Uhle in his Eugene shop. (Photo by Vanessa Salvia)

Stephen Uhle’s art is really too heavy to travel, so he only sells at one art show each year.

And although he’s never been trained in art, he sells nine out of 10 pieces he creates.

“I make art based purely on what looks good to my eye,” says Uhle, 68. “Evidently it has proportions that a lot of people like because my stuff sells.”

But it’s not what you’d call “normal” art. Uhle’s Restart Art makes use of recycled automobile and heavy machinery parts, such as leaf springs, brake drums and bed springs.

The pieces are too heavy and, in many cases, too large to load up and take anywhere, so he sells only once a year at Art & the Vineyard, held on the Fourth of July weekend at Eugene’s Alton Baker Park. Many of his customers commission pieces, such as garden orbs or fire pits, and he envisions what they want out of the materials he has in his large shop.

Uhle has shop equipment at a farm in Dexter, but does most of his work behind an auto parts store he opened more than 35 years ago in Eugene.

He was born in Chicago, raised in California’s San Fernando Valley, and moved to Eugene in 1981. Early jobs at a car wash and tennis racket factory held little appeal.

“Then I got a job in a machine shop in 1972 and that’s what I liked,” he says. “I’ve always had a creative side and tinkered with stuff. The machine shop saved my life because I hated those other jobs. I like working with my hands and the machine shop, even though it was low pay, was a skill that I knew I could take anywhere.”

He liked making things out of used car parts. A 4-foot lamp made from Volkswagen parts holds two identical light shades from BRING, a store in Eugene that sells salvaged and surplus materials. The bottom shade holds a candle, which is then protected by the top shade.

“People put things like this in the garden and it looks really cool,” Uhle says.

There’s seemingly no limit to how these items can be reimagined with a creative eye like his. A large brake drum weighing 120 pounds, for instance, became a decorative flower pot. A different, smaller set of brake drums became a barbecue and smoker.

His business card says simply “car part art,” but that doesn’t convey the full scope of what Uhle can create. He even made some pedal cars out of welded metal for a trip to Arizona’s Burning Man art festival a few years ago.

MIG welders consist of a handle with a trigger controlling a wire feed. The wire is fed from a spool to the weld joint. Electricity produces heat, and melts the wire to form the bond between the two pieces of metal.

Uhle didn’t even study welding until he’d been making art for a few years.

“I took an aluminum welding class at LCC,” he says. “The instructor stuck me in basic artistic welding, a bottom of the barrel welding class and I was amazed at what I didn’t know.”

As his shop grew and he pieced together more equipment, it expanded the things he could make. One of his favorites is a round object made of donut-shaped throwout bearings from an industrial transmission builder.

“I’ll use any kind of old metal parts that strike my fancy,” he says. “Old iron pipe that’s real rusty has a lot of character to me and I might not even do anything to that. I never know where I get my ideas from. I just see a piece of iron and I get inspired by it.”

In fact, Uhle dug a length of rusty old pipe from the ground of his Dexter goat farm (where he keeps three dairy goats) and turned that into a propane-fueled garden “torch.”

One of his fire sculptures has a permanent home in downtown Eugene in front of New Zone Gallery and is lit up on First Friday Art Walk nights.

When Uhle first considered starting his own shop, he looked around in the Los Angeles area.

Even in the early 1980s, the monthly cost to rent a shop there would have covered his rent for an entire year in Eugene. Since he had inherited the Dexter property, he decided to make the move to the Eugene area and establish his shop here, buying equipment a little at a time.

His pieces sell for affordable prices — the 4-foot lamp sells for $135, while larger garden lamps might sell for $200.

Even though Uhle doesn’t transport his art out of the area, he’s open to new commissions. He especially appreciates being asked to do a piece that he hasn’t done before, or use a new material.

His customers usually have ideas about what they want when they approach him about a commission, and Uhle enjoys working collaboratively with the customer to bring the idea to life.

“Sometimes working on a project like that is really difficult, because when I draw an idea I never have it turn out like I draw it,” he says with a laugh. “And I’m never sure if I’m going to like it or not until it’s done. It’s a challenge but it’s a real fun challenge. When I get asked to do something different it gets me out of my mundane thinking. There’s so much that I haven’t done and that I might not even think about doing until someone asks me to do it. That’s what keeps the creativity going.” 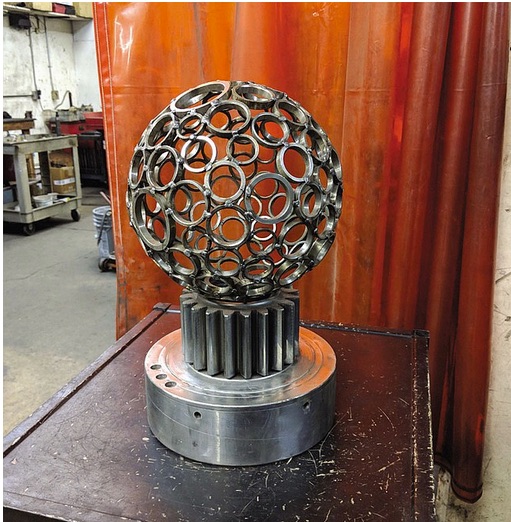 Most of the art that Uhle sells ends up in the garden because of its durability and uniqueness, although this amazing orb could go anywhere. (Photo by Vanessa Salvia)

Livable Basements: Behind the Scenes Choices for a Comfortable Space