By Vanessa on July 2, 2015 in Gardening, Register-Guard

This appeared in the May 2015 edition of the Register-Guard’s monthly special publication Home & Garden.

Establish young plants right, and they may yield abundant fruit for nearly 50 years. 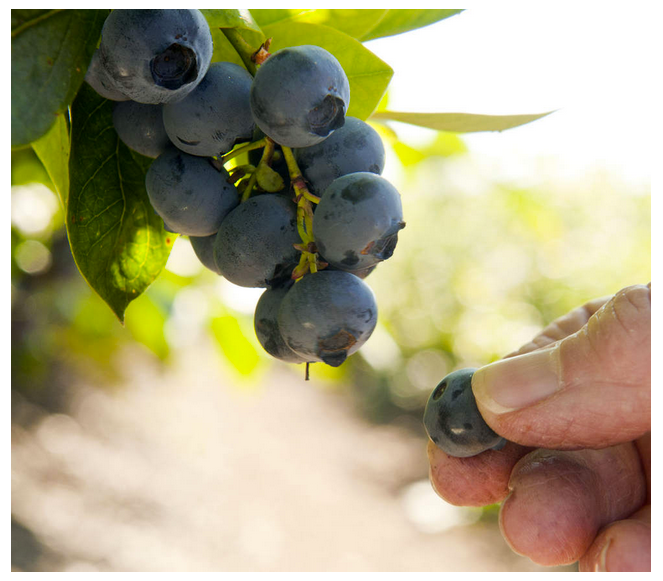 Blueberries are a tasty and healthy addition to any homestead. But cultivating patience may be the most important aspect of growing them.

Blueberries have specific needs and take eight years to become fully mature. Under the right growing conditions, however, the plant can live for up to 50 years, says Dr. Bernadine Strik, a professor of horticulture and lead berry researcher at Oregon State University. “If you get things right with blueberries, you’re going to reap rewards for a long time,” she says.

Doug Hooley has more than the average homeowner with his 500 bushes covering nearly half an acre at his home near Dexter, but the techniques he uses to keep his plants healthy will work for any size of crop. “Blueberries aren’t tricky, but they’re not a passive endeavor,” Hooley says. He established his plants in the late 1990s and sells the harvest primarily to friends and family. “It’s a little extra vacation money,” he says.

Hooley planted three varieties of early berries — ‘Duke,’ ‘Earliblue’ and ‘Sparta’ — which ripen in midsummer. He and his wife, Angela, wanted the berries to ripen early so they could be among the first to market them. The couple pick the berries themselves, so they wanted all of their plants to ripen at the same time.

Their 500 plants yield between 2,400 and 4,000 pounds, which Hooley says isn’t great. “I have a real bird problem here,” he says. “We probably lose 25 to 30 percent of the crop to birds.” He’s considered netting, but that will cost him a season and a half of income and he’s not ready for that investment. “I’m a hobby-size field,” he says. “I’m not dependent on it for a living, but the physical barrier is the only sure way to protect against birds.”

Blueberries resent competition with weeds, and they need good drainage. But the three key factors for success are the plants’ need for acidic soil, pruning, and fertilizing with the right stuff. “Not considering soil pH is a big one,” says Strik. “The key thing for blueberries to do well is to have that soil pH within 4.5 to 5.5.”

Most vegetables like a higher pH, which is achieved through adding lime. Lowering the pH requires adding elemental sulfur, which, after reacting with water, forms sulfuric acid. Blueberries like acidic soil, but be careful: Adding too much sulfur at one time can burn the plants.

If you’ve already planted blueberries and see young leaves that are yellow with green veins — the classic symptoms of unhappy blueberries — Strik says you will need to slowly lower the soil’s pH to make it more acidic.

If you want to plant blueberries now, hopefully you’ve adjusted the soil pH already. If you haven’t, Strik says to buy the plants now while they’re in the nurseries, put them in a larger pot, prune them and prepare your soil by slowly adding sulfur while irrigating throughout the summer to create the acidifying chemical reaction. “In our area, blueberries do really well when they’re planted in early October,” she says.

Blueberries have shallow root systems that like to grow in a thick layer of mulch. Some growers use bark mulch, but Hooley blankets his blueberries with sawdust. He hoes out weeds rather than using Roundup. Once the weeds are gone, he applies a dose of fertilizer followed by an inch of sawdust each year.

Strik says blueberries need small amounts of fertilizer from April to June to support new growth. “The biggest error is buying just any garden fertilizer,” she says. “Nitrate nitrogen is the right nitrogen for all your veggies, strawberries, raspberries, blackberries and grapes, but blueberries like ammonium nitrogen, just like rhododendrons do.”

Those gallon blueberry containers from the nursery will have flowers on them that must be pruned off right away. Fruiting is a high-energy endeavor, and the plants won’t establish a good root system if they’re trying to grow fruit the first year. Flower buds form on new growth, so without new wood, berries become smaller and less flavorful and production drops off.

“People are afraid to prune,” says Strik. “They think it hurts the plant. The plant that’s been pruned well will consistently produce fruit. By the time it’s mature, it should be producing anywhere from 10 to 15 pounds of blueberries per bush. It’s much better to be patient.”

The OSU Extension Service offers publications dedicated to successful blueberry production. Their library also offers other useful information, such as how to test for soil pH (see below).

Blueberries by the book

OSU Extension publications catalog, https://catalog.extension.oregonstate.edu:
From the catalog, navigate to a 22-minute video on techniques for pruning blueberries (search for “pruning blueberries video.”) The video can be purchased or watched online.

Timothy Patrick: A Singer for all Ages
Sweet Potato Success in the Willamette Valley