I actually wrote this in the summer of 2014 when the Huntons were hoping to get a crop of green garbanzos. Tasting them still in the field fresh from the pods was revelatory. The weather makes the final call however, both last year and this year the window to harvest them before the weather began heating up was too short. If you do happen to see these green gems in the market snap them up. Now you know what to do with them! This appeared in the May 20, 2015 edition of the Register-Guard’s quarterly guide to food and dining, Tastings.

Fresh chickpeas are a crisp delicacy worth culinary experimentation if and when the opportunity arises. 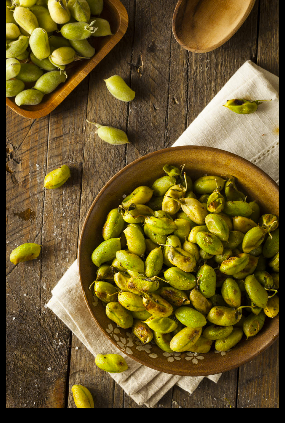 In-the-pod chickpeas are shown in both a fresh, green, just-picked state (upper left) as well as roasted.

Of course you know chickpeas . . . those round, brown, hard dried peas smaller than a marble that make creamy hummus. You know the cans of pre-cooked beans labeled as garbanzos that get tossed into your salads or perhaps fried into falafel. But do you know fresh chickpeas? Don’t feel bad if the answer is no, because almost no one does.

That’s because nearly all garbanzos are dried. A farm near Junction City that supplies Camas Country Mill with dried chickpeas has experimented in recent years with harvesting some fresh chickpeas, and at times has distributed handfuls to lucky local chefs before letting the rest of the beans dry in the field.

“The fresh peas taste like a legume, but when they’re raw they’re a little bit on the crunchy side. They’re green, and taste really fresh,” says Tobi Sovak, chef-owner of Noisette Pastry Kitchen in Eugene. Two summers ago, Sovak got a few pounds of fresh chickpeas from farmers Tom and Sue Hunton, owners of Camas Country Mill. Those chickpeas made it onto Sovak’s menu for a period of about a week in early summer before they were gone, and she’s hoping for more whenever the chance presents itself.

“We blanche them quickly, it doesn’t take very much,” Sovak says. “You could eat them raw. We usually put them in a cold whole-grain salad with quinoa and freekah and black beans, or in a cold tart. I like to put them in something that lets people really taste them, because you don’t normally get them. It’s so rare.”

The Huntons’ son Jason currently manages several acres for wholesale production of dried garbanzo beans. The peas grow on short, bushy plants about 8 to 20 inches tall, with feathery leaves on either side of the stem. Each pea is secured inside a small green pod that snaps open with a pop. They can be harvested fresh, or windrowed and left to dry in the field. Last summer, a spate of hot weather made timing the harvest of the peas a bit tricky, so the Huntons left them all to dry.

The Huntons caution home chefs that they do not plan to harvest fresh chickpeas on any kind of regular basis or for retail sale, and no other local farms appear to be growing chickpeas.

There are other options, however; for example, at times fresh chickpeas are available from specialty produce retailers, particularly Mexican food-oriented markets. Plaza Latina in Eugene, for one, currently has green chickpeas sourced from a distributor in California. Sold in the pod, they can be found in the store’s refrigerated produce section.

Jason P. Robinson, a chef at Creswell Bakery, says he enjoys working with fresh chickpeas in the kitchen when he can get them.

Prepping the fresh beans can be labor intensive, so Robinson experimented and found a shortcut method that yields more flavor with less work. “I get a cast-iron pan just ripping hot and let them char right in the pod,” he says. “They get a little smoky and they steam in the pod. Then you put them in a bowl with some salt on top and eat them like you would edamame.”

Or, blanche the chickpeas in a large pot of boiling water and then plunge them into ice water. “That’ll set their nice green color,” Robinson says. “I’ve talked to other chefs, and the consensus is that you can also roast them in the pod in a 350-degree oven until they’re tender.”

Robinson does not recommend blanching chickpeas in the pod. He warns: “Getting a mouthful of boiling hot water when you try and eat one
is not good!”

Sovak’s approach is a classic one of pairing chickpeas with Middle Eastern and Mediterranean flavors. She suggests blanching them and refreshing in cold water, then sautéing with garlic, shallots and preserved lemon.

“For their flavor profile, I think about pairing with them with goat cheese, olives, dukkah, peppers, cucumbers, eggplants,” she says. “A black olive tapenade and goat cheese in a salad with fresh chickpeas, peppers and cucumber would be great.”

Noisette makes its own dukkah, a spice blend with toasted hazelnuts, sesame seeds, cumin, coriander, salt and pepper. “It’s got the texture of bread crumbs,” Sovak says. “We sprinkle it on top of things and we use that in the whole grain salad to add flavor and texture.”

Robinson’s approach is one of experimentation. Whenever he encounters a new thing, he asks himself, “What is it?” and “Can I eat it?” If the first two are already established, as in the case of the chickpeas, his next question is “What can I do to it?” “I would sub favas anywhere that I would use a green bean or fresh green pea,” he explains.

Robinson has made a relish with shucked and blanched chickpeas along with garlic, parsley, thyme and olive oil. “That was great on top of gazpacho,” he says. “We also used it on bruschetta.”

Whether you experiment or pair chickpeas with classic flavors, don’t pass them by at the market or on a menu. The next chance to eat these little green gems might be a ways off.

Winemaking ‘Round the World
Timothy Patrick: A Singer for all Ages