Written for the April 2014 issue of Boomer and Senior News. 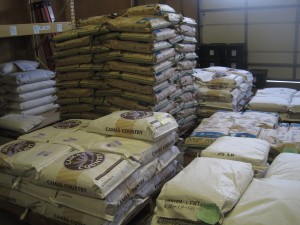 Bagged flour in the Camas Country Mill warehouse is ready to be distributed. Photo by Vanessa Salvia

Driving through the I-5 corridor in the Willamette Valley, there’s a sign near Albany declaring it “The Grass Seed Capital of the World.” While that part of our fertile Willamette Valley is known for grass, there are many small farmers are who actively trying to change that, and the owners of Camas Country Mill have a lot to do with it.

It’s been about 80 years since a stone gristmill operated in the Willamette Valley, but that’s all changed thanks to Tom Hunton and his wife, Sue. They previously grew mostly grass seed on their 2,700-acre farm, which has been in the Hunton family for three generations. Tom’s parents, Everett and Ellen, started the farm in 1952. Tom’s son Jason is the third generation to manage this fertile ground.

The shaky economy that started a few years back impacted the housing industry, and all of a sudden there was less demand for grass seed—less new construction means less grass seed for lawns. “Tom looked down the road and saw that the housing industry was taking a dive,” says Stephanie Powers, Camas Country Mill’s tour guide. “More importantly, he took a look at the fact that a high percentage of the wheat in the Willamette Valley—nearly 90 percent—is a commodity wheat, which means it gets shipped out. It doesn’t stay here.”

Tom was also “appalled,” says Powers, at our state’s alarming hunger statistics, and specifically the number of hungry children. In a place that has such fertile land and a rich history of farms, he felt that there was no sense in that and he wanted to do something. Tom connected with the agricultural scientists from Oregon and Washington state universities to see if different varieties of wheat could grow again in the Willamette Valley. “They grew wheat at some test sites and they found that yes, they could grow some really beautiful varieties of wheat here, that could stay here,” says Powers. “Tom connected with a seed bank in Washington, D.C., and procured some ancient seed and heirloom seeds and found that they too can grow in the Willamette Valley, so that started them on the course of growing whole grains that could be milled into flour.” Camas Country Mill opened in April of 2011, and they milled their two millionth bag of flour earlier this year.

The first gristmill in the Pacific Northwest was built along the Columbia River at Fort Vancouver in 1828. Mills soon popped up wherever there were fields that could be planted and water that could turn the great stones for grinding.

Electric power and high-speed steel rollers eventually replaced these labor-intensive mills. Over the years, local farmers quit growing their own wheat as the food systems shifted and bread could be bought in stores. As more and more farmers converted from food to grass seed, descendants of farmers and new farmers faced a gap in the knowledge of how to grow these historic crops. A generation or two of farmers had no first-hand experience or elders to seek advice from on how to grow beans and grains, and how to store the crops through our wet winters.

When the Huntons sought stones for their mill, they had to look to Denmark for their 32-inch diameter grinding stones. “They purchased a Danish mill because there weren’t any stone grist mills made in the United States anymore,” says Powers. “The stone comes from Denmark but the infrastructure is all made in the U.S.” The symbol that they chose for their logo, the camas bulb, is an homage to the Native Americans who populated this area. Long before the advent of grist mills, local tribes harvested camas bulbs, dried them, and ground them into flour.

The wheat is grown on the farm, then harvested and cleaned at the Huntons’ seed cleaning plant on Highway 99. Once cleaned, it is stored in tote bags that hold a ton of grain. The totes are hauled in to the mill site, then lifted with a forklift. Gravity allows the grain to pour into a metal bin, which is then hoisted onto a stand. From there, the grain will fall into the hopper of the mill and drop down into the main chamber containing the millstones. The bottom stone is stationary and the top stone slowly grinds the grain. Grain that is ground to the specifications passes through a screen and into a chute where it is bagged. Grain that doesn’t pass through the screen goes back through to be ground again.

When Powers brings groups of elementary school children in for tours, they get to learn where the flour for their bread or cookies comes from by grinding whole grains between small stones—a larger, flat stone on the bottom with a slight indent and a smaller, easier-to-hold stone for the grinding. Most bakers believe that the highest quality flours are made by the slow, cool grinding of stones , preserving the nutritional value and flavor of the flour. “The beauty of this machine is that the seed is never compromised by heat that would destroy any of the nutrients,” explains Powers. “ That’s the big difference between a roller mill which presses it out through heat and pressure, or a hammer mill that just smashes it to smithereens. This is the gentle, natural process of grinding.” All of the tailings, or leftover grain bits, are sold as animal feed, making Camas Country Mill a waste-free facility.

Bob’s Red Mill, which started in 1978, is a popular commercial grinder located in Milwaukee, Oregon, that still uses this traditional milling process. “And thank goodness we have Bob’s Red Mill,” says Powers, because you can go anywhere in any grocery store pretty much and get a really good bag of flour.” But what makes Camas Country Mill different from Bob’s is that Bob’s is not the farmer. “We are very unique,” Powers says. “We are the farm, the farmer, the mill and the miller. Bob does not have those relationships that we have and that’s pretty unique.”

Growing food with local farms isn’t quite enough to solve the hunger problem or the food self-sufficiency problem. It’s important to grow staple food crops such as beans and grains, but there also has to be a local market for it or the farmers can’t afford to continue producing it. The Huntons have partnered with Lane County’s food bank, FOOD for Lane County, to add a lentil-barley soup mix to the food boxes that are distributed to hungry people in our area. “The combination of a lentil and a barley is 23 percent protein,” says Powers. “Because it has been so well-received, Governor Kitzhaber is wanting this soup mix to be mainstreamed into other food boxes throughout the state. And, Tom has used his leadership in the farming community to help convince others to grow food that is going to stave off hunger in Lane County, so that’s been a real ‘cock-a-doodle-doo moment’ for us to get this into food boxes.”

Camas County Mill also currently supplies food to five school districts and is beginning to find markets in some senior care facilities and retirement communities. Also, a large number of bakeries throughout the northern and southern Willamette Valley are using Camas Country Mill flours in their baked goods. Camas products are available in a small retail store at the Eugene location, at the year-round indoor Sprout! farmers market in Springfield, and online from their website. “It’s really phenomenal how much we’ve grown in three short years,” remarks Powers. “People nowadays are realizing that where their food comes from and having that relationship with the farmer is really important.”

Earlier this year, a Eugene woman named Elin England wrote her second cookbook focused on local food. Her first book was titled “Eating Close to Home: A Guide to Local Seasonal Sustenance in the Pacific Northwest.” Her second book, “Beans, Grains, Nuts & Seeds: Further Adventures in Eating Close to Home,” focuses on recipes using the many varieties of staple heirloom food crops that farmers like the Huntons and their partners are growing. “Beans, grains, nuts and seeds form the fourth cornerstone in the foundation of a vibrant local food system,” says England. “When we combine these ingredients with locally grown fruits and vegetables, dairy products, meat and fish, we see that it is truly possible to feed ourselves.”

These kinds of partnerships support not only the local economy and directly benefit real people, the reverberations can be felt around the world. Within the last month, the Eugene 4J School District has purchased an applesauce muffin mix made with emmer, a grain known as farro in Italy, and organic cinnamon procured by a local company called Red Ape Cinnamon. “Emmer is one of the most ancient of grains,” explains Powers. “It dates back to biblical days, it is the grain that fed the pyramid builders. They would make bread, beer and a hot porridge-like cereal, so it’s a beautiful grain with a lot of history connected to it.” Emmer is about 16 percent protein, making it a nutritious, sweet and nutty choice for the schools’ muffins. Developmentally disabled adults at Eugene’s Pearl Buck Center package the muffin mix, and five percent of the proceeds from the sales of Red Ape Cinnamon support the restoration of orangutan habitat in Sumatra.

The friendship between Sue Hunton and Stephanie Powers goes way back. They both taught for years at Hamlin Middle School. How many years? “Let’s just say many years, lots of years!” laughs Powers. Because of Sue’s educational background, she leapt into action when she learned that a historic one-room schoolhouse was slated to be torn down.

The Lower Fern Ridge Schoolhouse in Alvadore sat on a piece of private property. “Sue just could not bear to see this be demolished,” says Powers, “because it’s such an iconic structure.” The Huntons purchased the schoolhouse and moved it on skids—“just like Little House on the Prairie”—to their farm site. When it’s renovated, it will become an on-site education center.

The Huntons know their own farming history and that of our region. Through their farm and mill they’re able to bring some of that history back to life again. Through the schoolhouse, future generations will understand that what the farmers in the Willamette Valley are doing is not so much a revolution as a return to a tradition that was almost lost long ago. “It’s that personal connection and that local connection,” says Powers. “Those are all really, really good things for our community.” 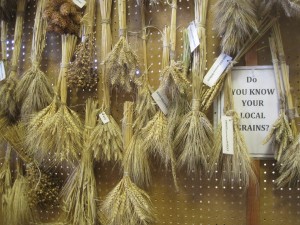 In the small retail space known as The Mill Store, a display of the various grains offered by Camas country Mill highlights the variety. Photo by Vanessa Salvia 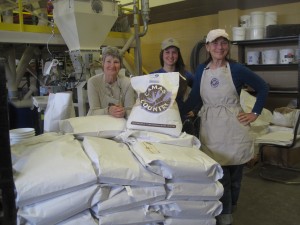 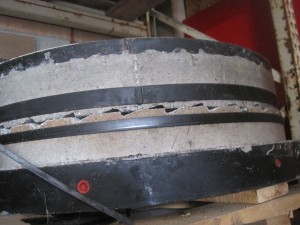 The mill has two sets of 32-inch millstones that are switched out for sharpening and maintenance. Photo by Vanessa Salvia 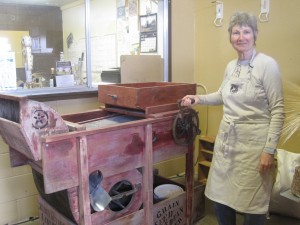 Stephanie Powers stands next to The Clipper, a piece of antique equipment on display in the Camas Country Mill Store. The Clipper separated the wheat from chaff by a hand-operated crank which caused a screen to vibrate. The vibration caused the larger pieces to be sifted down while the lighter pieces where blown away by a large fan. Photo by Vanessa Salvia

One Response to Keeping the Millstones Turning