Published in August 2013 edition of Boomer and Senior News. 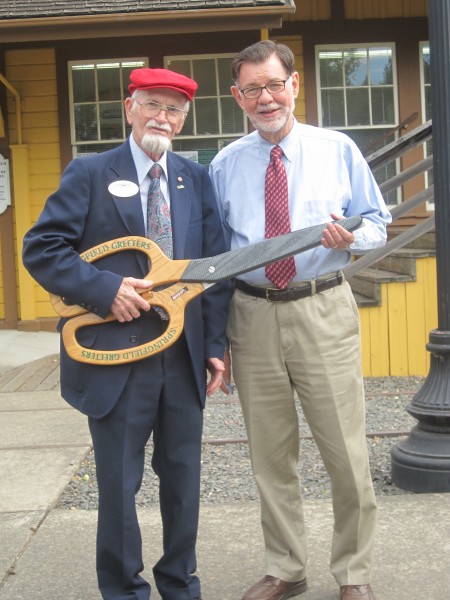 Bill Kievith and Ken Harris, a fellow development director at the Chamber, on their way to a ribbon cutting ceremony. Photo by Vanessa Salvia

It takes a lot to get Bill Kievith riled up. In fact, not even a traffic accident that totaled his car can lead him to express anything other than gratefulness. On a recent morning, Kievith, 75, was traveling to a meeting for his job as Development Director for the Springfield Chamber of Commerce when he rounded a curve and crashed into the back of a car that itself had been crashed into by a car that fled the scene. Kievith was shaken up and went home. He and his wife, Camille, had to find a new car and rearrange their schedules, but neither of them were worried. Camille and Kievith both said how grateful they were that it wasn’t a more serious accident. They were grateful that no one in the other car was injured. They were grateful that their totaled car had given then many years of use. And grateful that they had lived within their means long enough that they had the resources to buy a new car now that the time had come that they needed one.

Gratefulness. That’s Bill Kievith’s motto that gets him through life and work. “I consider myself to be a very happy person,” Kievith says. “And I think the secret to being a happy person is to be a grateful person.”

Bill and Camille are very interested in health. In 1994, Kievith was diagnosed with heart disease and was urged to have a quintuple bypass operation. “I didn’t do it,” says Kievith. “Instead I went on the Dr. Dean Ornish program to reverse heart disease with no drugs or surgery.” He taught classes in heart health and founded support groups for people following the Ornish diet. Despite following that diet and lifestyle program, Kievith later did have a heart attack. At the time, he says he didn’t recognize what was happening, even though he had taught heart attack awareness classes. Kievith turned that experience into volunteering at the former Sacred Heart Hospital as a peer counselor to cardiac patients.

Nowadays, Camille and Bill still walk everyday. “On our walks a lot of the time we will just think of the things we’re grateful for: ourselves, each other, kids, grandkids, living in Eugene, living in this house, not having financial troubles . . . a never-ending list of things he’s grateful for. And not even a shake-up like a car accident can cause him to forget to tell a joke or two. One of the jokes Kievith likes to tell—to grocery store clerks or anyone he happens to be talking to—is, ‘How much the did the pirate pay for his earrings?’ “Buck an ear,” he says. Dan Egan, Kievith’s boss at the Springfield Chamber, appreciates Kievith’s experience. “He’s very helpful in all parts of the Chamber, and not just in rudimentary ways,” Egan says. “He has a good sense of humor, dresses in a snappy way, he’s the ultimate respectful person. He tells a good stories—a bad joke, but a good story!”

“I’m basically very much an introvert,” Kievith says, though you might not sense that from how talkative he is. “The reason my wife and I get along pretty well is that in the beginning I didn’t have to do much of the talking. I just had to be a good listener.” Telling jokes has become a good icebreaker for Kievith. “It has made me more social to have those little gimmicks like a couple of good jokes . . . Would you like to hear my latest?”

Kievith launches into a couple more jokes. It’s easy to hear his accent, a remnant from growing up in Holland. He came to the United States with his parents in 1949 at the age of 11, and spoke no English. He witnessed thousands of American and British paratroopers dropping behind enemy lines during World War II, to capture bridges spanning the Dutch and German border. An uncle of his emigrated to America, and then came back to the Netherlands, and his parents decided that the family would have a better chance at life in the U.S. “As so many families decided during that time,” Kievith says.

Kievith retired from the Army as a Lieutenant Colonel in 1981. He and Camille had four daughters and now have four grandchildren. Two of their daughters, Carrie and Lori, live here in Eugene with their families and both work for the Eugene Police Department. Becky currently lives in Katy, Texas, but her employer, British Petroleum, is likely to relocate her and her family to Trinidad in the near future. Julie and her family live in Omaha, Nebraska.

After his Army career, Kievith worked locally for radio and television stations, and ran his own advertising agency. He retired for the second time in 2000 and became a “very active volunteer,” he says, racking up hours as a YMCA board member, SCORE member (a non-profit business development organization), an OASIS member (a national educational organization dedicated to enhancing the quality of life for mature adults), and at the Eugene Library.

For the past four years he has been the business development director for the Springfield Chamber of Commerce, a position he created. Kievith has brought more than 200 new businesses into the Chamber, more than anyone in the history of the organization. “He’s a real asset,” says Egan. “He represents the Chamber with a touch of warmth wherever he goes. He cares about people. He listens well. He’s been a most wonderful addition to our staff for the past 5 years.” Kievith works about 30 hours per week, starting early and working at least through lunchtime, sometimes until 5 o’clock.

Egan recently nominated Kievith for the “Embracing Life” award, presented by the Age Knows No Limits Project. In typical self-deprecating fashion, Kievith says he won the award only because his boss did a good job on the writing. Egan, however, has a different view. “Kievith is a sort of a renaissance man,” Egan says. “He has knowledge and interest in many areas. He’s a consummate professional, he has had a long, interesting life, he’s well-read and educated and is a lot more than what you would call a sales person.”

The award honors older citizens who strive to keep themselves active and involved in their community. “It’s about embracing life and doings lots of things,” Kievith says. Dan Egan has said that he plans to retire from the Chamber in 2014. At this point, Kievith isn’t sure if he’ll stay on for the next executive director or not. But he probably will, given his philosophy about staying busy. “Working for me is very important because I’m engaged, I’m active,” he says. “And working here is like being with a second family.” 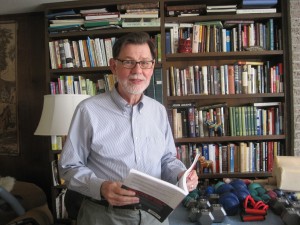 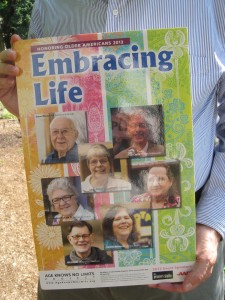 Bill Kievith was one of 7 recipients of the Embracing Life award presented by area senior agencies honoring healthy and active seniors. Photo by Vanessa Salvia