By Vanessa on March 4, 2015 in Boomer and Senior News, People Profiles, Retirement, Seniors

I interviewed volunteer Camille Ronzio for the May 2014 issue of Boomer and Senior News. 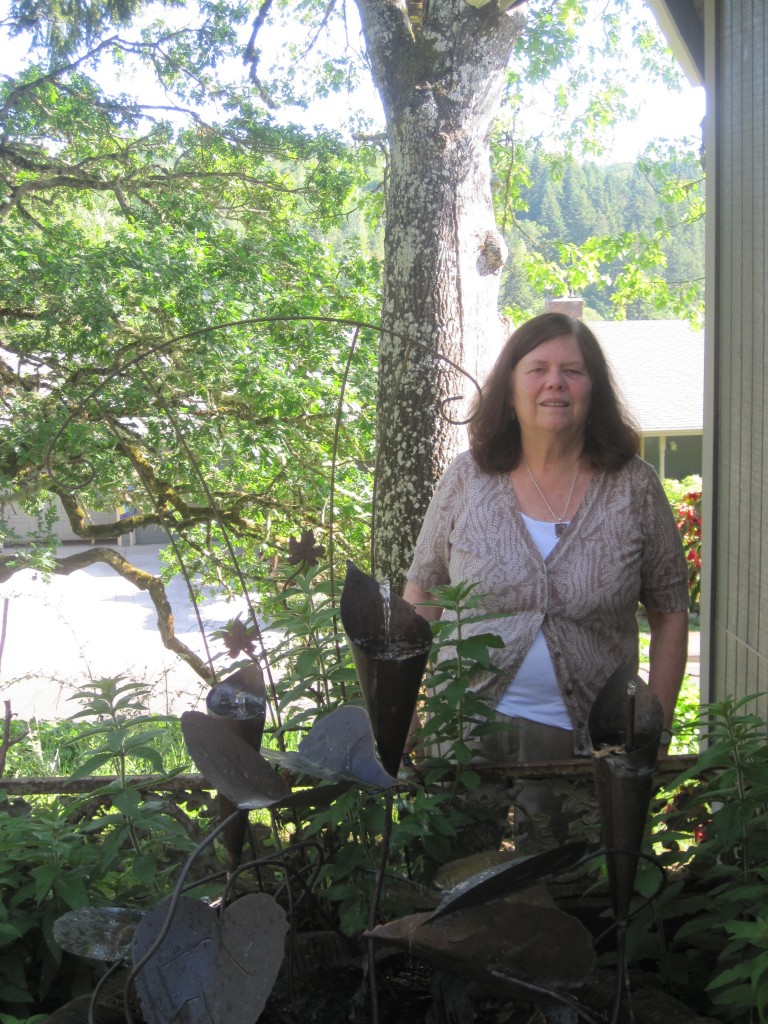 Camille Ronzio stands by the fountain outside of her Eugene home. She and Jim took great pride in installing that fountain by themselves. Photo by Vanessa Salvia

One active volunteer spends time on the things she is passionate about.

Camille Ronzio’s volunteer work is a natural outgrowth of her career. She retired just over 10 years ago from teaching high school home economics. “At the end of my career they called it Family and Consumer Science,” she says. It was a field that underwent numerous changes over the decades, and encompassed many more aspects than just what went on inside the home. “We taught all kinds of things,” Ronzio recalls.

The name was changed from Home Economics in the mid-1990s, and the modern definition of Family and Consumer Sciences deals with nutrition, food preparation, parenting, early childhood education, family economics and resource management, human development, clothing design, as well as other related subjects. In today’s academic jargon, Family and Consumer Sciences education focuses on families and their interrelationships with their communities, so it makes perfect sense that Ronzio would find herself as the community development chair for the Eugene Southtowne Rotary Club.

Ronzio has been married to her husband, Jim, for 45 years. She and Jim are both “Colorado kids” who came to Eugene to go to graduate school and never left. “We became Ducks!” she jokes. Camille keeps herself busy with volunteering and making herself available for their two grandchildren. Jim is an “Honorary Rotarian” because he supports Camille in all of her efforts to help. “I really see retirement and aging as an active process,” she says. “Now that I’m retired it’s my time to give back.”

At the end of her career Ronzio was working with the infant-toddler center and a program for young parents at Willamette High School. “I felt really strongly that school is the safest place for young parents and their children to be,” she says. After retiring she began volunteering with the Rotary Club and is also active with Delta Kappa Gamma, which Camille describes as “a plucky group of current and retired educators.”

The motto of the Rotary Club is “Service Above Self,” which Ronzio has taken to heart. She says that Rotarians really want to make a difference, but sometimes, the logistics of how an organization makes decisions can diminish or slow down the actual impact of a project. For instance, the leadership of many volunteer organizations changes each year. Many community groups plan all year to achieve one big project, and sometimes it would take Ronzio’s group of Rotarians most of the year to figure out what they were going to do and make it happen.

Because of her career in working with schools, young parents and other community groups, she knew what the community really needed. “Now we work with bridging the gaps with community partners,” Ronzio says. “When you work in a school you know who needs food, who doesn’t have a coat or shoes.” The Rotary Club has an emergency fund and an emergency loan fund to help out, and she coordinates efforts with other community groups that are closely in touch with actual families in need. “The volunteer work that you do can only be as good as the group you are a part of,” she says. “Our Eugene Southtowne members really pitch in and help.”

Ronzio’s role as head of local community projects is a great fit for her skills and experience. The Eugene Southtowne Rotary Club works with Head Start of Lane County, which provides child developmental and education services to low-income families. She also works with Downtown Languages, which provides English as a Second Language instruction. Through this organization she helps to distribute Hispanic food boxes and bilingual books. Through Delta Kappa Gamma, a large annual garage sale helps fund college scholarships for young women entering the teaching profession and provides books and sweats outfits to Head Start children to keep them warm in the winter.

She’s also involved in her church, which provides educational scholarships to young adults who have been active in the congregation, and is a volunteer at the Jordan Schnitzer Art Museum, where she gives guided tours, frequently to schoolchildren on field trips. “In retirement you need to do things that improve your mind, that educate you,” she asserts.

Camille and Jim also spend as much time traveling as they can. Earlier this year to celebrate their 45th anniversary they spent three weeks in Mexico. They are part of a home exchange group that allows them to stay in someone else’s home when they travel and they return the favor for people who want to stay in their home. “Now the stack of Christmas cards that I send out of the country is higher than the ones I send in the country,” she says. They recently hosted a filmmaker from Los Angeles. The director of the film “Breaking the Maya Code” was here as part of The Archeology Channel International Film and Video Festival which has been held annually in Eugene since 2003. Their friends and neighbors hosted filmmakers from other countries, and in June, the Ronzios will be hosting a woman from Denmark. “I am rarely bored!” she laughs.

The Ronzios have three daughters and two grandchildren, 6-year-old Abby and 9-month-old Ella, who live in Louisville, Colorado. “It’s a real blessing in retirement to be able to have the time and energy to go play and bond with them,” she says. “Since we don’t live in the same town I want my relationship with them to be more than just being a picture in a photograph.”

Yes, Camille is busy and spends a lot of time away from home helping other people, “My husband says I have an addiction to raising my hand,” she says. “But I spend time on the things that I am truly passionate about.” One of those things is scholarships. “Education is so expensive so anything I can do to help there I’ll do.” Second, is helping children and families, “because in today’s world, in today’s economy, some of them really have it tough.” Three is, sharing the love of art. “There is so much out there that you can do.”

Camille Ronzio holds art drawn for her by her 6-year-old granddaughter. Photo by Vanessa Salvia