By Vanessa on January 2, 2014 in Art and Artists, Register-Guard

Nancy Hoskins is an art historian in Eugene whose specialty is Egyptian textiles. She has studied the private and public collections of Coptic (Christian Egyptian) textiles all over the world. Her goal is to study ancient textiles, such as the burial tunic of King Tutankhamen and woven portraits so that the techniques can be preserved and recreated by modern weavers. Her work is stunning and the photos don’t really do them justice. This published in January 2013. 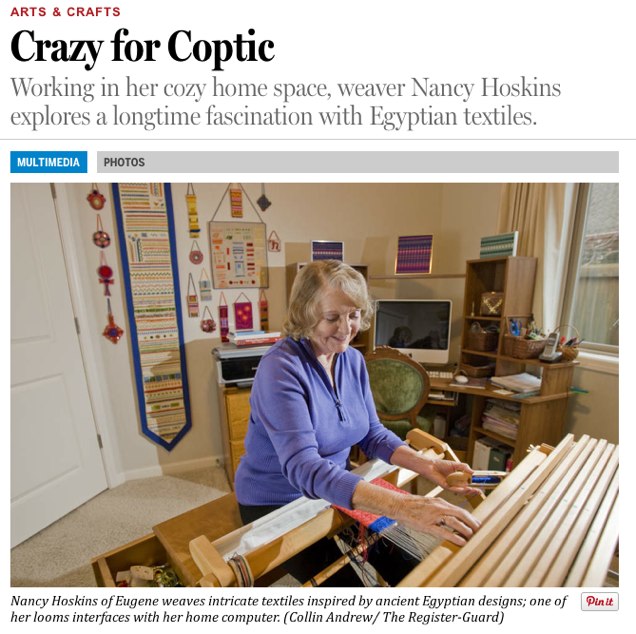 Nancy Hoskins, a former college weaving instructor, has a Master’s Degree in Fine Arts/Weaving, Art Education, and Art History from the University of Oregon. For decades, her research has been focused on Pharaonic, Coptic (Christian Egyptian), and Early Islamic Egyptian textiles. She has studied public and private collections of Egyptian fabrics all over the world, and has led teaching tours and workshops. Nancy has written three books and contributed to several others. Nancy’s work involves studying ancient techniques and recreating them so that contemporary weavers can utilize these techniques.

Tell me about your equipment, your looms.

I have 26” and 46” wide 8-shaft looms. I also use a 24-shaft loom that interfaces with my computer. Because of the 24 shafts and the interaction with the computer I can weave more complex patterns and weave structures.

How did you get started?

I used to teach elementary school and when I stopped doing that I had time to go back to school for art. I went to Lane Community College and took my first weaving class and my first art history class and it was—kaboom (Nancy claps her hands together). I’ve been passionate about it ever since.

What led you to Egyptian textiles?

That happened in that first art history and weaving course at LCC. When I realized that within this Coptic world there were 150,000 textiles to look at and most of them were pictorial tapestry images of Classical and Early Christian themes and figures. It opened up a whole new world.

During the Coptic or Roman and Byzantine Period in Egypt (late 3rd to mid-7th century A.D.) the word ‘Copt’, which initially described Egyptians, became associated with Christian Egyptians. However, the textiles from that period of time are both pagan and Christian in design, composition, or theme.

What do you find interesting about the textiles and techniques?

Because there are so many portraits, you feel like you’re looking at real people. I wrote this book, “The Coptic Tapestry Albums,” about the collection at the Henry Art Gallery at the University of Washington. The textile fragments were connected to the pre-Christian and Roman world. I had to go back in time to study what came before and then forward to see what came after.

I’ve been to Egypt three times, and the research became focused on one French archaeologist, Albert Gayet (1856-1916), who probably discovered 100,000 of the textiles now in collections around the world. It became a challenge, kind of like a detective story, to find out where these album fragments came from and to match them with pieces that were in other museums.

What have you learned?

I keep learning! It’s a never-ending quest for knowledge because there are always more collections out there that I haven’t seen. One of my interests was analyzing tapestry, which is like painting with yarn, but during the Coptic period more complex, patterned, woven textiles were discovered by Gayet. The challenge was figuring out how those were woven and then writing about it so that contemporary weavers can understand and use these ancient, but unfamiliar techniques. The intricately patterned textiles indicated an advancement in loom technology that made it possible to weave things that had not been done before.

Do you have a favorite piece or technique?

I’m always most interested in what’s next. I’m just totally engaged with what I’m working on. (Nancy holds up a beautiful pair of portraits in purple and gold.) These were inspired by a fairly new discovery in the Valley of Golden Mummies, a burial site that was discovered in 1996. The beautiful, gilded coffin masks show a blend of Egyptian and Greco-Roman culture. They aren’t entombed like the Pharaohs, but there are family burials. I love the idea that the husband and wife were buried side-by-side in almost matching sarcophagi. I’m not trying to make my work look like the golden mummies, but I became intrigued by that idea and wove his and her portraits.

I saw an interesting Coptic piece in the Denver Art Museum, analyzed the technique, recreated the pattern and wrote about it. I wasn’t so interested in just replicating what they did—though I did some of that in order to learn in the beginning—but would then use that technique for my own art. I’ve woven a number of portraits and iconic images that are based on different historical figures. One portrait was inspired by a Madonna in a mosaic in Hagia Sophia in Istanbul, others by Tutankhamun’s golden mummy mask.

You like to take some of these ancient textile techniques, simplify them, and then teach them?

To teach these lost techniques to contemporary weavers, I had to go back in time and learn so much. This is the Tunic of Tutankhamun (Nancy points to an image in one of her books). There are woven patterned bands on the tunic. I became very interested in that project, again, figuring out what they were doing in the time of King Tut, and replicating the patterns using their 3000 year old technique. Sometimes what I’m weaving has to do with the research and trying to figure out what the ancients were doing and what materials they used, and sometimes it might be just a tapestry or a silk shawl to wear or gift. 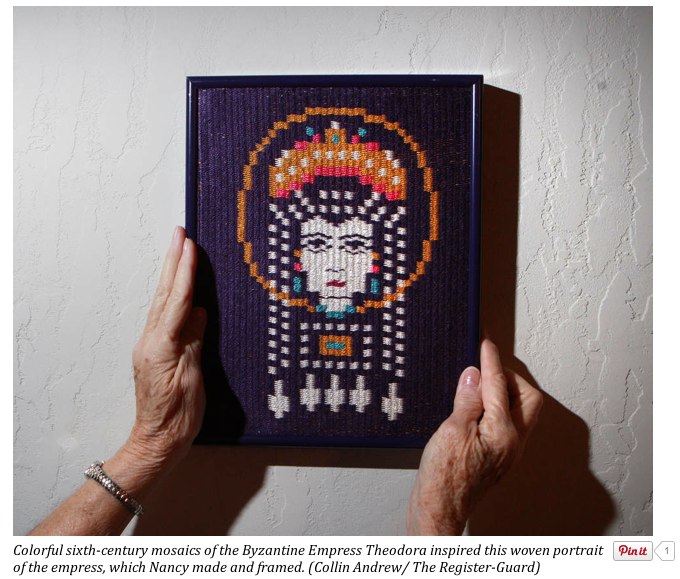 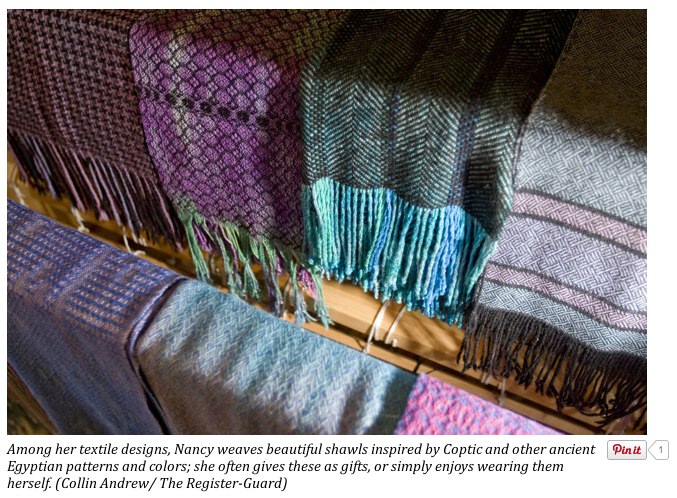