By Vanessa on December 16, 2013 in Business, Health and Wellness

Here is a teaser for my latest article for the Winter 2013-14 Eugene Magazine. This was for the Health and Wellness section, and was about a fairly new workout studio in downtown Eugene called Barre3. The name refers to the elements of yoga, pilates and ballet that the creators pulled from to create the workout. I took one of the classes and if this is a workout that you stick with, I can assure you it will blast your body into shape! The full article follows below. 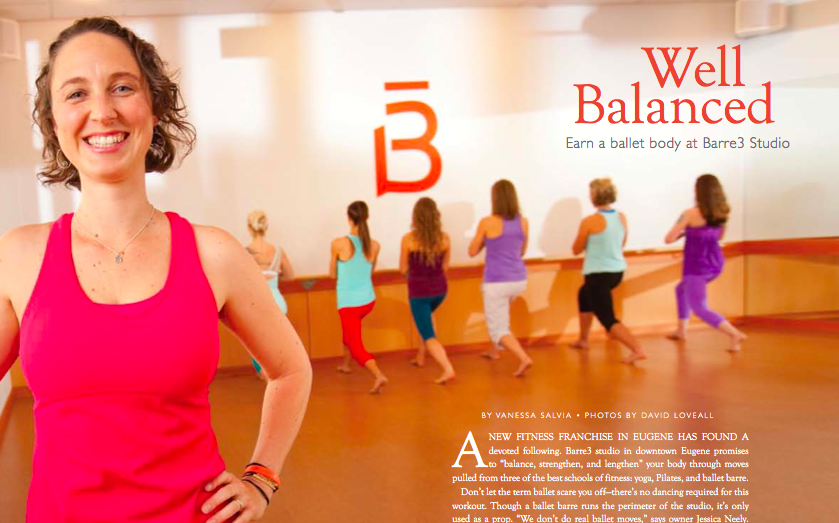 Get a ballet body at barre3 studio

A new fitness franchise in Eugene has found a devoted following. Barre3 studio in downtown Eugene will “balance, strengthen and lengthen” your body through moves pulled from three of the best schools of fitness: yoga, pilates and ballet barre.

Don’t let the term ballet scare you off . . . there’s no dancing required for this workout. Though a ballet barre runs the perimeter of the studio, it’s only used as a prop. “We don’t do real ballet moves,” says owner Jessica Neely. “We use it for balance or, for example, holding onto the bar so you can root into your heels.” The workout also uses squishy balls for resistance and light 1 to 5 pound hand-held weights, and mats for some floor moves. Barre3 workouts are 60-minutes and move through a flow of moves targeting different body parts, emphasizing the importance of form and alignment while performing low-weight, high rep exercises to sculpt long, lean and strong ballerina-worthy muscles. “The workouts fuse principles of yoga, Pilates and barre together to create a class that works your arms, legs, core, seat and hamstrings,” says Neely. “We take some wisdom and body awareness and flexibility from yoga, core strength from Pilates and gracefulness and fluidity from barre.”

Clients line up at the barre for the start of class, while high-energy pop music plays from a laptop. After a warm up, instructors start with isometric holds to engage the muscles. Then, a one-inch movement is added in followed by a large motion for that same muscle group. “Then often we end in another hold to seal the deal,” says Neely.

Barre3 was founded in Portland in 2008 by Sadie Lincoln, who grew up in Eugene. “It just took off,” says Neely, who owns the Eugene franchise with her husband, Jonathan Ross. Now there are around 40 studios in the U.S. and abroad. Lincoln’s fitness approach has been featured on Dr. Oz and in numerous national magazines, and several well-known celebrities have hyped barre3 workouts.

Neely enjoyed a similar barre workout when she lived in California, and that’s when she and Lincoln first met. After moving to Oregon in 2010, Neely looked for a barre workout but couldn’t find one. “I went to yoga classes and I went to Pilates classes but there was nothing like the barre3 classes,” Neely recalls. “So I went to Portland and looked Sadie up and went to one of the barre3 studios there. They told me they’d been looking for someone to open a studio in Eugene and hadn’t found the right person yet.”

Neely and Ross were planning a family, and she knew she didn’t want to work from a desk anymore. The 3 in barre3 symbolizes balance, a key feature for the couple. “I wanted a more balanced life,” she says. “It was a long process but we decided to sign on and franchise and we opened the studio in April 2012. So much about barre3 is finding that balance and being a well-rounded, fit person. It’s a great fit for us.”

Neely and Ross, both 37, signed the papers in the early stages of her pregnancy, so she’s had to find that balance between work, home, motherhood and owning a business. To make it easier for other parents, childcare is an important part of the studio. The play area is right by the front desk in an open, colorful and welcoming space. “The kids like being there and they don’t feel like they’re shut away,” says Neely. “They’re front and center.”

Denby Evans is one of the studio’s most dedicated clients, regularly attending five classes per week with her 2-year old twins. “I can go and at 8:45 am it’ll be there for me and I’ll have someone to watch my children,” says Evans. “That makes it easy. I went the first month after it opened and I haven’t stopped. I’m addicted!”

Evans was a competitive swimmer through college and was used to working out daily. Even though she’s extremely fit, she still finds barre3 to be a challenging workout. “I see myself as more of a cross-fitter but I went to barre3 for three days and I liked the balance of exercise—you work on your flexibility, you work on your core and your strength and you can relax your mind. Unlike running which can be hard on your body, I think barre3 is a great daily exercise.”

Barre3 gets harder, says Evans, as you’re able to work more muscles in more postures, and work deeper into those muscles as they strengthen. “I’ve noticed dramatic changes in my body,” she says. “I never used to work my core at all but now I definitely have better posture and I just feel more stretched out.”

For Neely, it’s still fun, to both teach and do barre3. “It’s challenging whether you’ve done it a long time or never done it before,” she says. “A lot of folks run regularly, then they come in a do that detail work, get into those teeny tiny muscles, firm the core. The body firms in right away, you feel taller, you feel stronger.”

Neely encourages clients to take more than one class to see if it feels right, to try out a few different instructors. If it hooks you like it’s hooked others, a month of unlimited classes is only $99, with several class times daily. There’s also a Facebook page where clients can ask Master Trainers questions anytime, as well as online video classes that you can do, even when you can’t be at the studio