I’ve had Ray Walsh’s flight offering his side-by-side comparison of his Oregon and New Zealand wines, and as he states in this article, the difference is unmistakable. It’s definitely worth trying. This article appeared in the May 20, 2015 edition of the Register-Guard’s quarterly publication about food and dining, Tastings.

Ray Walsh of Capitello Wines brings out the best of terroir in Oregon and his native New Zealand. 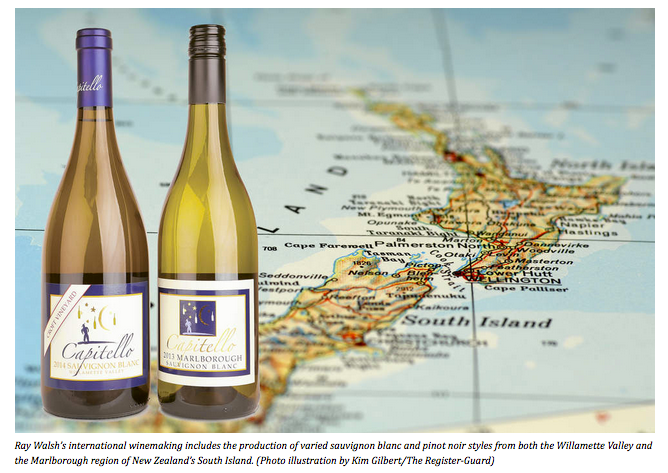 New Zealand has become known as a cinematographer’s heaven, a place of wild rugged beauty with an intensity of light that comes from the country’s proximity to the South Pole.

“Even on a cloudy day you would wear your sunglasses,” says Ray Walsh, a native New Zealander making wine in both Oregon and his home country. “The intensity of the light is quite bright and the grapes are really going to enjoy that.”

In California, say, where the heat can ripen anything, sugars develop, which converts to alcohol. But “this isn’t about sugars, it’s about developing flavors,” Walsh explains. “Light develops flavors; the longer grapes stay on the vine, the more flavors you’ll get. With this intensity of light, we’re also getting these intense flavors and they really stand out.”

“It’s the same winemaker, the same varietal,” he says. “It’s the regional differences you’re tasting. When people taste it they just go, ‘Wow!’ It’s a night-and-day thing. When you see these wines together, it’s quite amazing. Even the novice will see the difference and be quite impressed by it.”

But Walsh refuses to choose a winner himself. “I let everyone else make up their mind,” he says and laughs. “They’re worlds apart. People generally will pick one that they like over the other, and it’s really fun to see that.”

Walsh came to Oregon’s wine industry in 1993 because he appreciated the complex flavors that are coaxed from Oregon grapes. In New Zealand, it’s the heady aromatics he loves. “The pinot noir I’m fermenting in New Zealand has this intense cardamom spice that comes off, and marionberries … you just don’t see that intensity in Oregon wine,” he says.

The rich aromas allow Walsh’s New Zealand sauvignon blanc to be a pleasant summer drinking wine. “You can chill the sauvignon blancs, and because they’re so aromatic it doesn’t diminish,” he says. “It becomes bright and alive and such a great summer drink.”

Walsh’s sauvignon blancs are some of the driest wines he makes, but the fruitiness imparts a sense of sweetness. Balanced with a nice acidity, these wines pair well with many summer foods.

Two other Oregon winemakers are also making wine in New Zealand after they discovered a love for the area. Peter Rosback, owner of Sineann Winery in Oregon’s Chehalem Mountain AVA, produces a pinot noir in New Zealand’s southern Otago Region. Herb Sims, owner of Barrel Fence Cellars, makes wine in Dundee and in central Otago. Walsh works in the Marlborough Region, at the top of New Zealand’s South Island.

Their partnership is not just philosophical. “We team up for economics,” Walsh explains. “Right now we’re in the process of loading up a 40-foot shipping container, and we each put what we can in to fill it. What’s left over will wait until the next time we ship. It’s a huge expense, so we jam-pack a container together.”

One remnant has yet to make its way to Oregon. In 2014, Walsh made his first chardonnay that wasn’t quite ready for the last shipment. That will make its way to our shores in January 2016. Walsh’s New Zealand pinot is going to be a featured wine in this year’s International Pinot Noir Celebration held in McMinnville during the last weekend of July. He will present his wines along with two from Australia, two from the Otago Region in New Zealand, and one from South Africa.

This year’s New Zealand harvest just wrapped up, and when asked about it, Walsh says, ‘Golly,’ and makes a noise that can only be interpreted as frustration and a resignation to forces outside of mortal control.

The crop was proceeding well, although it was a dry summer. Then the fruit seemed to be dehydrating too quickly, so Walsh dropped his work here, paid buckets of money to change his flight and arrived in New Zealand two weeks earlier than planned — on the same day that Cyclone Pam hit the country. Luckily the damage was slight, but the storm stirred up atmospheric currents that cooled off everything.

“I rushed to get there two weeks early and then twiddled my thumbs for two weeks,” he says with a sigh.

Quality-wise, though, Walsh says it’s some of the best grapes he’s seen. “Real intense, spicy jalapeño in the sauvignon blancs,” he says. “It’s very strong, really interesting. For pinot noir there’s definitely a more elegant sense coming out this year in New Zealand, and I haven’t really seen that sense before, not in a number of years, so instead of a big showy-off style it’s going to be a prettier style. “I can’t wait to get back after they have some time in the barrel to see how they’re going to mature.”

Ray Walsh’s Oregon and New Zealand wines can be compared and contrasted at the Capitello Wines tasting room, 540 Charnelton St. in Eugene. Shipments of the 2014 New Zealand vintage haven’t yet arrived from overseas, but will in the coming weeks. A 2014 chardonnay also is in the works and scheduled to arrive stateside in January 2016. Hours are noon to 8 p.m. Wednesday through Saturday. 541-520-3092; capitellowines.com