By Vanessa on June 29, 2015 in Boomer and Senior News, Food, Gardening, Retirement, Seniors

This article about growing peppers in the short Willamette Valley season appeared in the July 2015 Northwest Boomer and Senior News.  The only problem with interviewing experts and getting all the tips for articles like this is that I then have no excises for why my garden fails to thrive! Hopefully you’ll learn what you need to do it right.

Spice up your cuisine and your garden with these expert tips on growing peppers. 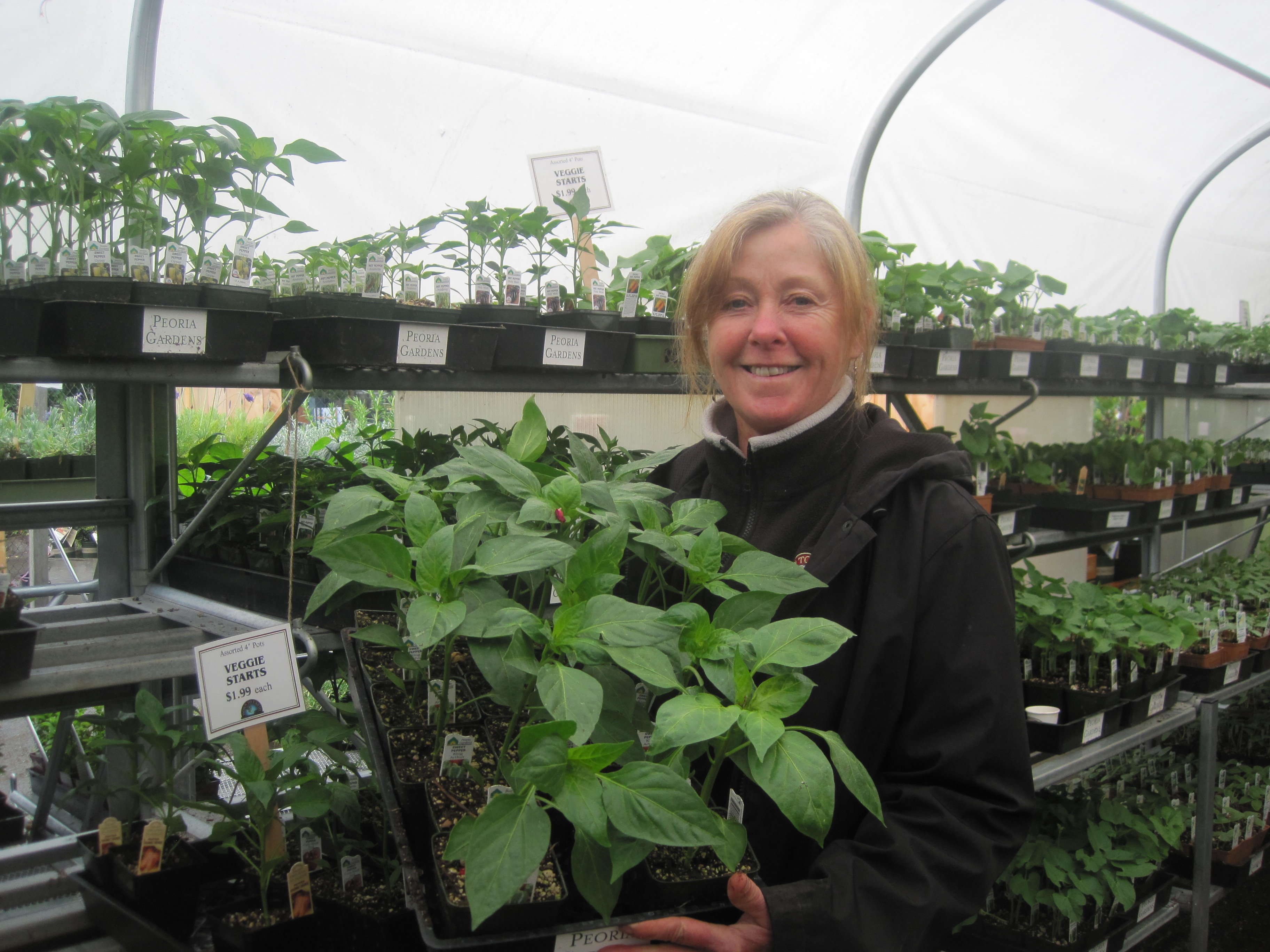 Carol Tuffo, the plant buyer for Down to Earth in Eugene, offered about 40 pepper varieties this season. Photo by Vanessa Salvia

Peppers of any kind—whether you like the world’s tiniest and hottest or the crunchy, sweet ones—are a great addition to your garden. Peppers are compact plants that can produce a bushel of fruit that can be used in many cuisines. Peppers can be eaten raw, roasted, roasted and frozen, pickled, dried and powdered, or made into bright, flavorful sauces. In the Willamette Valley’s fairly short growing season, however, peppers take some advance planning and care to grow successfully.

While tomatoes can go into the garden in mid-May or as soon as the danger of frost has passed, peppers get planted a little later. “They are very fussy about the warmth of the soil,” says Carol Tuffo, plant buyer and nursery sales manager for the Fifth Street location of Down to Earth in Eugene. “Most people wait until after Memorial Day for both tomatoes and peppers but you can certainly get them going and then pot them into a larger container.”

Down to Earth sells soil thermometers, but they also take measurements to give their customers a general idea of what the soil temperature is on any given day. “They’re not going to set fruit until nighttime temperatures are consistently at an air temperature of 55, so putting them out early means they’re just going to sit there.”

Protecting plants like peppers with a greenhouse is ideal, but if that’s not an option and you want to put them in the ground as early as possible, use floating row covers to insulate the plants in the beds. “Some people use something called a wall of water which is a circular thing that has tubes that will insulate the plant at night,” Tuffo says. “They do actually work and there are people that just swear by those if they don’t have a greenhouse or a covered bed.”

The planting spot should receive full-day sunshine, and if you do happen to get a cold night, protect them with something. “One thing that works very effectively is a nursery pot that has drainage holes in the bottom so they get some air circulation but it will still insulate them,” says Tuffo, who says that pots with drainage holes will work fine. “You want it to acclimate to those nighttime temps so that gives a little bit of air flow which is advantageous.”

Keep your plants inside until it is warm enough, gradually repotting them into larger pots to allow them to develop a healthy root system. “You also want to harden them off before you put them directly into a bed,” says Tuffo, “which means adjust them slowly to nighttime temperatures.” That can be as simple as moving the plants outdoors during the daytime and then bringing them inside a little later each night to transition them into the cooler outdoor temperatures.

Give them their nutrients

Tomatoes and peppers, both heat-loving plants, can both succumb to blossom end rot, which is soft, dark spot on the blossom end of the fruit that spreads and causes the fruit to become inedible. “You want to have a balanced fertilizer with not too much nitrogen to supply enough phosphorous and calcium to prevent this,” Tuffo says. “Use oyster shell or any form of bone meal to apply phosphorous. When the plant starts flowering you want to give them another dose of fertilizer at that time and a liquid fertilizer will probably act a little quicker.” Granular types of bone meal go into the prepared bed and slowly breaks down so the nutrients are there when the plant needs it. Some gardeners apply a solution of Epsom salts to the soil, which supplies calcium, magnesium and other elements. “People use that not only on vegetables but also on roses that is definitely OK,” says Tuffo.

The hardest part about growing peppers will likely be deciding what kind to plant. Down to Earth will carry at least 40 varieties of peppers this year. “Sweet or hot peppers . . . the list is long!” says Tuffo. At Down to Earth, her customers prefer the colored sweet peppers, like ‘Golden Summer’ (a sweet, lime-green pepper that turns golden), ‘Purple Beauty (a sweet purple bell) and ‘Golden Star’ (a bright yellow bell). “There’s Italian sweets, which are kind of long ones that are really good for roasting. Then there’s a whole list of hot peppers like your jalapenos and habaneros.”

Last year, one of Tuffo’s customers gave her some plants from a Padron variety of pepper that she started from seed. It was a variety that was new to Tuffo, but “it was the most amazing pepper,” she exclaims, and she now carries it at Down to Earth. “It produced so many I had a hard time keeping up.” Tuffo’s friend says she harvested the peppers when they were about two inches long and sautéed them with olive oil and garlic. “I actually couldn’t keep up with them that way and I ended up at the end of the season drying them and making a pepper flake out of them once it turned red,” Tuffo says. “I used that throughout the winter in chilies and different seasonings where I wanted a little spice.”

Debbie Tilley and her husband, Ben, own Crossroads Farm in Eugene, on 25 acres that they moved to in 1985. The Tilley’s sons, Nathan and Ben, own and operate Agrarian Ales, which produces craft beers using hops and herbs grown on-site.

“I gave the boys the old barn and they made it into a microbrew,” she says. “They were always into brewing so they decided to put in hops. We wanted to keep the farm alive and growing and you have to be creative to keep a family farm going these days. We didn’t want to sell the farm to some stranger that’s going to build houses on it.”

Tilley grows enough tomatoes and peppers to supply Agrarian Ales for their pizza, soups and sandwiches. She also grows their popcorn, onions and potatoes. The farm grows about 2 acres of hops and 4.2 acres of peppers. “We plant about 15,000 just for the farm and I start about 5,000 for plant sales,” she says. She grows about 40 different varieties ranging from mild bells to sweet Italians to hot habaneros.

Tilley sells some fresh peppers weekly at the Lane County and Corvallis farmers markets, but she also sells many value-added products made from her pepper abundance. “We roast the peppers like they do in the southwest,” she says. “We roast six or seven different types of peppers like poblanos, green chilies and sweet red Italians. I grow a whole bunch of the Hatch varieties and then a lot of the peppers that we grow on the farm are what I call my ‘powder peppers.’ I grow those exclusively for powder once they mature and turn color.”

Tilley grows a paprika, a cayenne and a guajillo that her husband smokes over hickory and cherry before drying and grinding them into a smoked chili powder. Some of the roasted peppers are frozen and sold in the off-season year-round.

“Other than being heat lovers they’re pretty easy to grow,” Tilley says. “I’ve been told for years you can’t grow peppers in the Willamette Valley but I’ve been doing it for 30 years so it’s doable.”

Tilley grows her plants from seed, starting them indoors on seed-warming mats before moving them into greenhouses. She sticks with Rexius’ Filthy Rich organic potting soil and adds her own components to get a slightly acidic blend with the minerals that peppers want. “I use a rose and flower mix because it’s got the higher middle number that peppers like,” she says. “I mix that in with the soil for my starts.”

Once the peppers are in the ground, it’s a matter of finding the earliest varieties you can, getting them in early and waiting for them to mature, she says. “If it starts raining in September and it rains the whole month the rain will cause the slugs to thrive and cause the peppers to split,” she says. A light frost is OK a heavy frost will defoliate the plants. In that event, all you can do is pick what you can salvage. “If you know a frost is coming cover them with a blanket and that can keep the temperature 10 degrees or so warmer,” she says.

Tilley defies conventional wisdom for both tomatoes and peppers by using an overhead watering system. “We haven’t changed because it works for us and I think it keeps the plants healthier” she says. “Once a week our plants get washed. We’re overhead watering but it rinses the bugs off each time so for the most part, if there are any aphids or spider mites in there it washes them off.”

Tilley points that Americans are the only culture that regularly eats peppers green. Just about any pepper will turn some color, primarily orange, red or gold but sometimes purple or brown, when it is fully mature. That’s when the pepper is its most flavorful and also highest in vitamin C.

She says that she has been keeping track of weather trends and sees that global warming is leading to warmer and drier summers, which is good for peppers. “I see that trend continuing,” she says. “I’m confident that this is going to be a good pepper year. Last year was a good pepper year and people told me they had a lot of success and got a lot of peppers.” 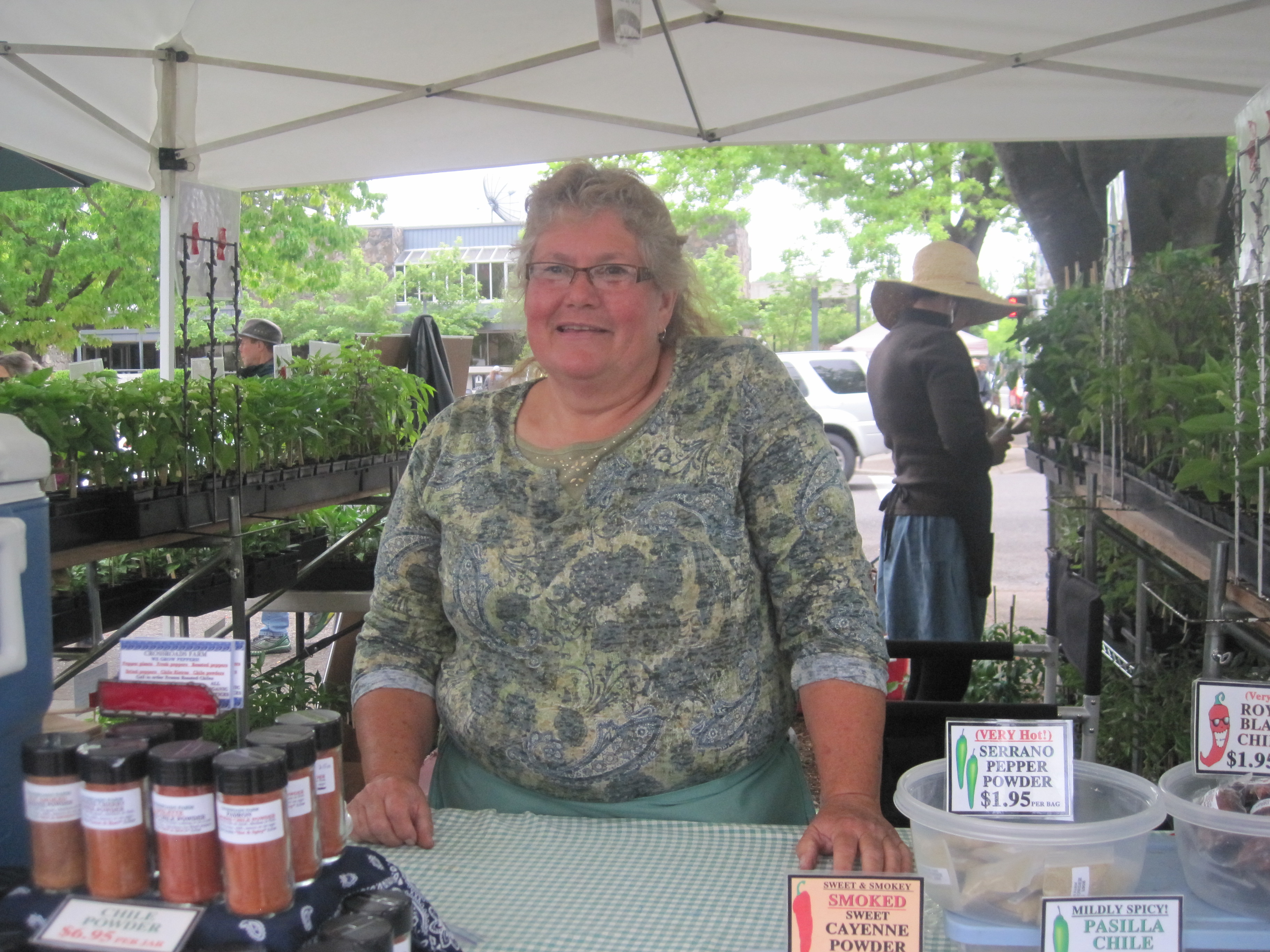 Debbie Tilley of Crossroad Farm sells hundreds of pepper starts in her booth at the Eugene Saturday Farmers Market. Photo by Vanessa Salvia

This PDF has instructions for canning a variety of vegetables, including chili peppers:

A Champion for Her Cause
Winemaking ‘Round the World