This appeared in the May 2015 edition of the Register-Guard’s annual Discovery section. It’s filled with the best places to camp, hike, fish, swim and explore in Lane County. For this issue I also contributed an article about waterfalls in the Western cascades and an article highlighting some of the area’s top disc golf locations (which didn’t make it online). 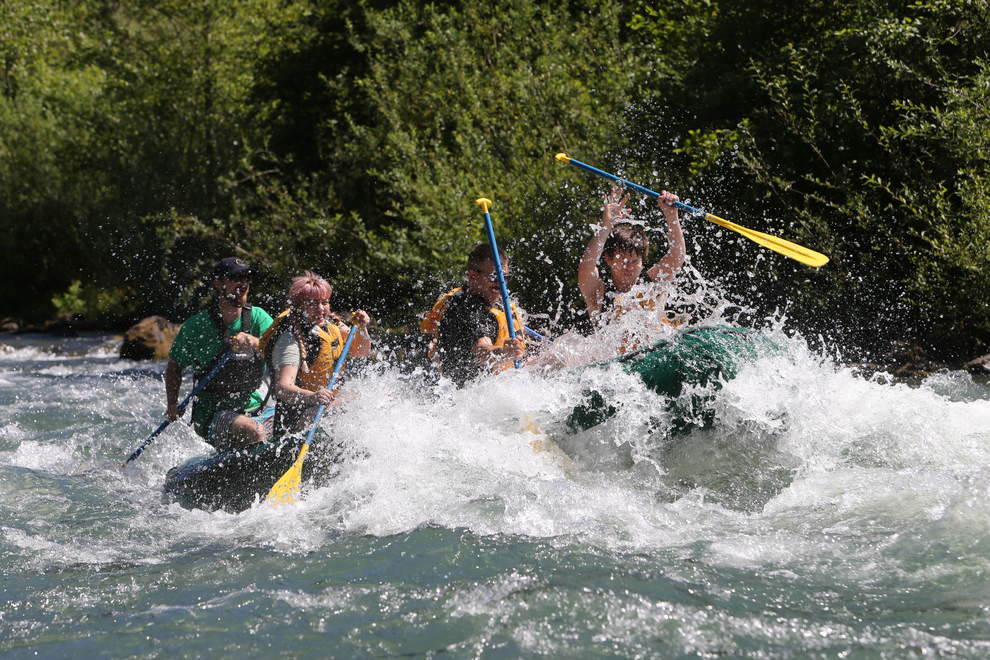 Upstream Adventures guide Jeff Smith, at back of raft, leads a group down a little-used stretch of the Middle Fork of the Willamette River in July 2014. (Collin Andrew/The Register-Guard)

Upstream Adventures co-owner Quin Slocumb loves showing people the view from a river, and thanks to a lack of guides running through Oakridge, a 6-mile section of the Middle Fork of the Willamette River is an undiscovered gem.

Slocumb and Tobias McMullen started Upstream Adventures four years ago. The pair rent canoes and inflatable paddleboards, and offer fly-fishing trips along with half- or full-day guided rafting trips from May through October.

“I love getting people out on the river who don’t normally have a chance,” says Slocumb, 38. “I’ve been kayaking since I was 12 so it’s normal to me but seeing the reaction of people that don’t get on a river very much, to take people somewhere they don’t normally get to go, is really satisfying.”

Slocumb grew up running the popular Ocoee River near his hometown of Chattanooga, Tenn. “I fell in love with rivers,” he says. At 18 he became a river guide and kayaked for fun, then moved to Eugene for college and ran rivers in summer.

McMullen, 36, has a similar story, running rivers professionally and for fun from a young age in Idaho.

Even for locals, the Middle Fork of the Willamette River is an often-overlooked resource for paddle sports.

“There’s never really been a rafting company here,” Slocumb says. “We were amazed how many people who live in Oakridge, who grew up here, have never actually floated the river. People say how different this town looks from the river, so they get to see the place where they grew up from a whole different perspective.”

Nearly all Upstream Adventures trips put in just below Hills Creek Dam east of Oakridge. Take-out is at a private RV campground 6 miles downriver. If enough people sign up, the company offers a full-day float that continues for another 4 miles.

The Middle Fork of the Willamette River provides Class II+ rafting, which is on the lower to medium scale of difficulty. But the river is versatile enough, and Slocumb and McMullen knowledgeable enough, that they can make the river feel “bigger” than Class II. “We can spice it up for people who want more excitement,” Slocumb says.

Trips are open to anyone of any age who fits into a life jacket. “We take 2- year-olds and 102-year-olds,” Slocumb says. “It’s not strenuous and you don’t need any prior experience.”

Slocumb says one of his favorite experiences is to take someone who is apprehensive and watch them relax. “They’re into it but you can tell they have some hesitancies,” he says. “Seeing them get in the boat and relax and then start to participate is one of the coolest things. I’ve taken kids who are a little apprehensive — my own kids were the same way — but they fall in love with it.”

The river is largely undeveloped through Oakridge, and it’s not crowded. “There are days when if a couple people book a trip they might have the whole river for themselves,” Slocumb says. “One time we came around a corner last year and there were 25 elk swimming across the water.”

The Middle Fork is used to regulate the temperature of the main stem of the Willamette, so when the weather heats up water is released from Hills Creek Dam to keep it cool enough for fish.

“Last year because it was so hot they kept releasing water so we had double the normal flow all year,” Slocumb says. “This summer, filling the reservoir is the bigger question. But on years when most other rivers are really bony and you’re dodging rocks, this one turns into a splash fest, a big wave train.”

Upstream Adventures’ guided half-day rafting trips on the Middle Fork of the Willamette River are $50 per person; full-day trips, with a 10-person minimum, are $85. The company also offers rentals of canoes and inflatable paddleboards for $50 per day. Located at 47921 Hwy. 58, Oakridge; 541-255-6327; upstream-adventures.com

Wonderful Waterfalls to the West
A Champion for Her Cause