By Vanessa on June 29, 2015 in Boomer and Senior News, People Profiles, Retirement, Seniors

Becky Sisley was as vibrant and energetic as she looks in this photo. At the age of 76 her schedule was busier than mine. This appeared in the July 2015 edition of Northwest Boomer and Senior News.

Oregon legend Becky Sisley has been part of a world of changes both on and off the field. 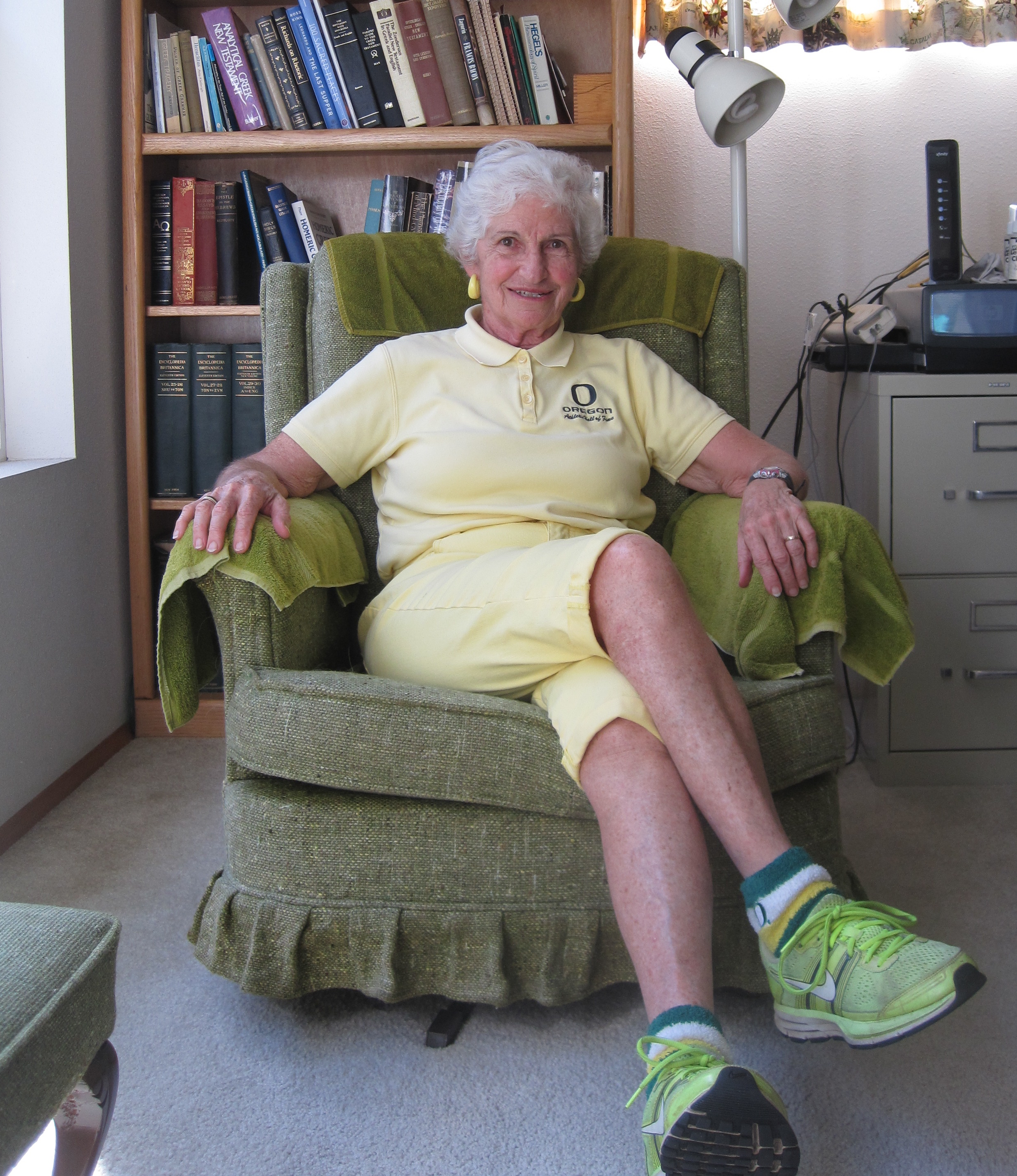 Becky Sisley, 76, is a champion on and off the field. Photo by Vanessa Salvia

Eugene resident Becky Sisley is a yellow streak, walking briskly around her home office dressed in a yellow Oregon Ducks t-shirt, yellow capri pants, yellow earrings, UO ankle socks, and yellow sneakers. Even her house is painted a ducky shade of yellow. There’s no doubt where Sisley’s allegiances lie. “I had essentially five different careers at UO because of changes in athletics and just progressing up the professorial ranks,” she says. Now that she’s retired, she enjoys attending home softball, football, basketball and volleyball events and some away games.

Sisley, 76, had a long career with the University of Oregon as a teacher, coach, women’s athletic director and head of Physical Education Undergraduate Studies. She lived through and helped lead the UO during the 1950s, ’60s and beyond in having women’s efforts considered the equal of men.

“I was softball coach for 14 years, from 1965-79,” she says. “Field hockey coach from 1967 to 1975 and I coached basketball in 1966.” She pauses to take a short breath. “I served as Oregon’s first and only Women’s Athletic Director from 1973 to 1979. I was inducted into the UO Athletic Hall of Fame in 1998.” In 2000, an award similar to the Leo Harris Award, was named after her to be given annually to a former women’s varsity athlete who has been out of school 20 to 25 years and has earned distinction in her profession, community service and support to the university.

As if all that isn’t enough cause for admiration, Sisley started training for Masters track and field at the age of 49. “Oh, yeah, that was the second half of my career,” she says with a twinkle in her eye. “I got married (to Jerry Newcomb) at age 55, in 1994, I remember it well because it was the same year I started to pole vault.”

Sisley grew up in Seattle and had four much older brothers, none of whom were athletic, and there were only boys in her neighborhood. “I just loved to chase a ball,” she says. “I learned how to play ball myself against my garage.”

In sixth grade the PE teacher organized a softball league playing the other 6th grade teams. “My 6th grade class had 9 boys and 2 of us girls got to play on the boys’ team and then I played on the girl’s team also, so that was the beginning of softball for me which was my main sport until I went to college.”

Her high school organized what was called “playdays.” Once a year all Seattle high schools would meet. “But the different schools would be all mixed together,” she says. “You couldn’t play as a team. Physical educators in this era didn’t want girls to compete. It came from the belief physical educators that girls were being showcased before mens’ games and they were wearing silky and skimpy uniforms and this was detrimental to the image of ‘frail, dainty women.’”

From the mid-’40s through the mid-’60s, the only opportunity for women to compete was in the sport of field hockey. Teams were coached, has uniforms and a hockey conference at the end of the season. Sisley wanted to play and learn at a high level, so whenever a team opportunity presented itself, she took it. Sisley played field hockey all four years at Washington. She also played intramural basketball from which the UW Sportsday team was selected. In 2007, she was awarded a varsity letter for her four years of intercollegiate field hockey and basketball.

Her senior year in college, she asked to join the Erv Lind Florists softball team in Portland. “We traveled a month that summer across the country playing a double header most every day,” she says. “This team in Portland was the best team in the northwest and had gone to national tournaments and I wanted to have that experience. Twice I made the northwest all-star team.”

She graduated from University of Washington with a physical education degree in 1961and earned a master’s from The Women’s College of the University of North Carolina in 1963. She came to Oregon in 1965 as a physical education instructor after teaching two years at the University of Wisconsin. Her assignment was teaching tennis, badminton, basketball, softball and fundamentals, which is basic exercise. “All the girls had to take fundamentals and posture,” she says. She went back to North Carolina for a sabbatical from 1971-72 and earned her doctorate in only one year and two summers.

In the late-’60s and early ’70s, teams were called interest groups rather than intercollegiate teams. She “coached” basketball and softball her first year. The interest groups and field hockey club were part of the Women’s Recreation Association and they didn’t have uniforms. In 1973, the UO created Women’s Intercollegiate Athletics within the Physical Education Department and then UO-president Clark named Sisley Women’s Athletic Director.

Title IX, which prohibits gender discrimination in public education and federal programs, passed in 1972. “In 1974 they still hadn’t told the public what Title IX meant, and people weren’t really that much aware of it.” In 1975 the federal government issued the regulations to implement Title IX. Most of the discrimination was in the arena of sports. The school was given three years to be in compliance with Title IX. Sisley spent hours documenting inequities in athletics and reporting them. “In the academic years 1977, 1978 and 1979 I was coaching softball, was Women’s Athletic Director and was fighting to implement Title IX,” she recalls. “I’ve estimated that 1/2 of all my time in those three years was related to Title IX.”

The extra burden of this work didn’t seem to phase her. “There’s no question about it . . . the growth of women’s athletics is all about equal opportunity, coaching and benefits. The university had to check admission policies—how did they recruit students for programs like architecture? How did they recruit students at Oregon State for forestry or engineering. You had to look at dorms—were the locks on the doors, the hours of the dorms and the size of the rooms non-discriminatory? They had to be the same for men and women. They looked at practice times, how students traveled, how much per diem was given. The task force completed a year-long study with over 80 recommendations across the whole campus and 43 had to do with athletics.” The major impact of this report was the merger of women’s athletics with the existing athletic department.

During the task force review Sisley took then-UO president Boyd on a tour of the women’s athletic facilities. The athletic training area didn’t have its own entrance—it was created by using cinder blocks to portion off part of the women’s PE majors’ shower room. “When the trainers came in they would knock on the door and there was a rolling blackboard at the entrance so the trainers wouldn’t have a clear view into the room,” she says. “They had to shout, ‘Yoo hoo, man coming in,’ to go through the locker room. We got action on this inequity the very next day.”

In 1979, Sisley took another sabbatical and afterward resigned as Women’s Athletic Director. She intended to return as half-time softball coach and half-time professor. However, due to massive changes in the Athletic Department, she decided it was best for her career to give up softball coaching. In 1985 she was named head of Undergraduate Studies and continued in that role until budgetary Measure 5 closed down the Department of Physical Education in 1991. During that period she created a coaching minor, a sports management emphasis and advised numerous graduate students.

In 1989, Sisley was put up for a promotion to full professor. Her case was originally denied, for what she believes were discriminatory reasons. She appealed and won, and was given back pay for the year it took for the appeal. Sisley retired in 2000, but continued to create and teach classes about women’s sports and gender. “I liked it a lot because I had lived through and done it,” she says.

At the age of 49, in 1988, Sisley learned that Eugene was hosting the Masters world track and field championships. “I always wanted to throw the javelin and high jump so I started training on my own for the Masters competition,” she says. At Eugene’s world meet in 1989 she was fourth in her events: long jump, triple jump, high jump and javelin. She became hooked and began attending national championships and many world meets.

In 1991, she went to Finland and earned a bronze medal for triple jump. She also competed in the 7-event heptathlon. At age 70 in 2009, she won seven medals at the world meet in Finland.

Sisley joined Eugene’s Downtown Athletic Club in the 1980s and continues to work out there on a regular basis. “I do weights two to three times a week, I do yoga two to three times, I do some EFX and treadmill,” she says. Sisley also walks her golden retriever, Sochi, named after the host city of the 2014 winter Olympics in Russia.

Sisley leans back in her chair, takes a deep breath and smooths our her yellow pants. “A lot of people are inspired by my fitness level and what I’ve done,” she says. And that’s an understatement.

Becky Sisley holds a poster of her achievements as a masters track and field champion. She competed in Finland in 1991 and medaled third in the triple jump. She didn’t even start competing until she was 49 years old. Photo by Vanessa Salvia