By Vanessa on April 2, 2014 in Business, Register-Guard, Salvage and Design

I had two stories published in today’s edition of the Register-Guard’s special publication Dash. This is the last Dash after 5 years of publishing a special section dedicated to women. The Dash concept is being folded into the regular paper as part of a new Living section called Weekend. I was proud to have these two stories, this one about upcycling cast-offs into nice gifts, and another about miscarriage, published in the last issue.

Trash to treasures
Repurposing donated items inspires and delights two friends and co-workers who have their hearts in recycled goods.

By Vanessa Salvia
For The Register-Guard
PUBLISHED: 12:00 A.M., APRIL 2 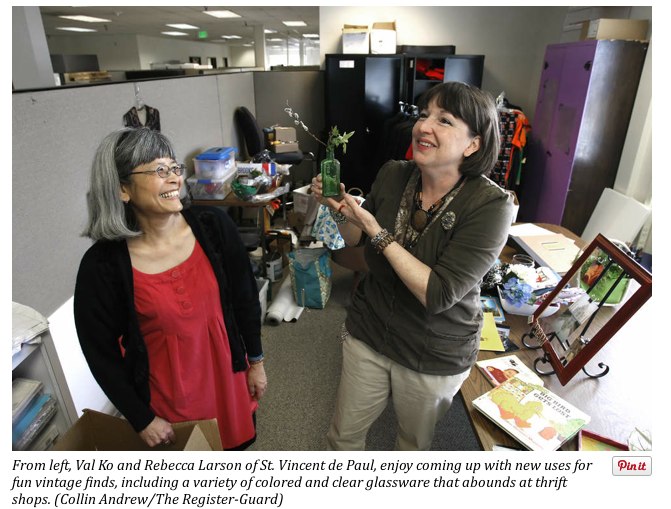 Rebecca Larson uses everything she can until it’s worn out. And even then, she’ll most likely find a way to reuse some part of it. Just now, Rebecca has a full skirt in a floral pattern with shades of aqua, and a canvas tote bag with straps in the same aqua color. The skirt is destined to be transformed into an apron as soon as the tote bag is worn out enough that she can take off the straps without feeling bad about it. “Maybe,” Rebecca says, “I won’t be able to wait that long!”

Even items as mundane as cereal boxes become fresh again — Val’s husband’s guided fishing trip is memorialized in a photo album with front and back covers made from cereal boxes that Val cut up and covered with paper and decorations.

Val holds up a fold-out vinyl LP album cover, with many individual pockets inside for holding records. “These were in the trash and Rebecca was appalled!” Val jokes. “We’re always appalled at what is in the trash!” Rebecca adds. “So I said, ‘Val, look what was in the trash. You have to do something with this.’ ”

The original LP records may not have been worth listening to any longer, but the album cover and the inside pockets are still in great shape. Val and Rebecca plan to decorate the outside and turn it into a keepsake folder.Rebecca made a planter out of a structured purse with handles. A bookmark came to life from a piece of leather and a geometric metal piece from a necklace.

Val holds up a sophisticated black and white apron made from a short skirt. “I was making a present for a girlfriend who got married,” she explains. “There was this skirt that I really, really loved so I turned it into an apron.” The two ladies finish each other’s sentences and seem to embrace their differences, like two sides of a coin. “I love bibs on my aprons,” Rebecca says. “When I’m cooking I really want a bib.” “I never put bibs on my aprons,” Val says with a laugh.

“Val is the seamstress,” Rebecca says. “She is the one with the real skill. I just put things together and say ‘oh, this will work.’” Rebecca’s skill seems to be taking simple, disparate objects and putting them together in a pleasing manner. One of her favorite objects is a Depression-era glass bowl that once belonged to her now-deceased mother-in-law. Rebecca filled it with pieces of tumbled white glass from St. Vincent de Paul’s Aurora Foundry, a starfish — missing one arm — and an easy-care tillandsia plant. “By using a broken starfish it doesn’t show,” Rebecca says. “And this is a piece of broken jewelry that I put in there because it makes me feel like I’m living in a fancy jewelry store instead of where I really live.”

Old bottles and jars, particularly those that once contained candles, abound in thrift stores. One of Rebecca’s favorite gifts is made of a jar with a nice shape. She places pieces of old broken costume jewelry on the bottom for drainage, fills it with potting soil, and places a small succulent inside. “It’s like giving someone a mini-garden,” Rebecca says.

Rebecca and Val will be presenting a “Trash to Treasures Show and Tell” at Petersen Barn Community Center in Eugene, April 7. Attendees will have the chance to make some crafts of their own to take home. Rebecca says they have planned a project around Easter baskets; also, Terry McDonald, the agency’s executive director, is providing curly willow cuttings from his own tree for another planned project, a glass bottle display. Rebecca’s jar project was inspired by a green glass bottle she found for 50 cents while shopping at the West Broadway store location, her favorite weekend haunt. She checked out the jar and found a similar one on eBay for $19. “To me it’s priceless,” Rebecca says. “Color and beautiful things and reuse makes me happy.”

The ladies developed an interest in creative repurposing long before the talk came about. They’ve each worked for the organization more than 20 years. St. Vincent de Paul in Lane County started in 1953 with, aptly, a rummage sale. Today, the agency is known for its creative reuse and recycling of many materials, such as mattresses and glass.

“Recycling really can create jobs,” Rebecca says. “Reuse is the best use, and you can think about things in different ways. Creativity makes you a healthier person.” “Or a saner person,” Val says. “No comment,” Rebecca jokes. “And it’s fun,” adds Val with a laugh. 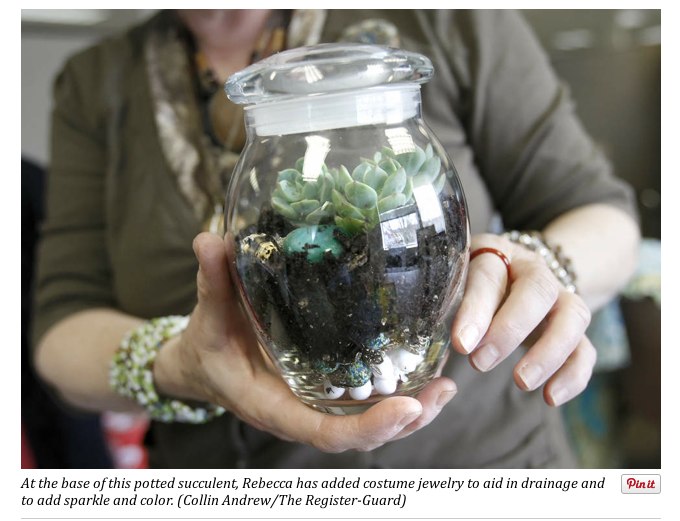 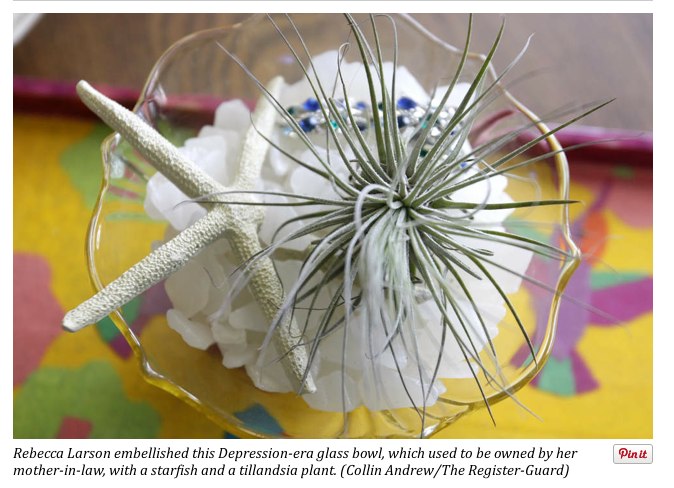 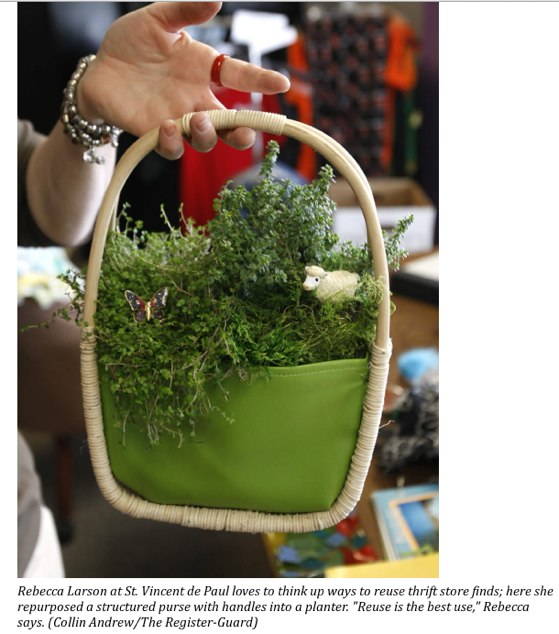 Mini Gardens for the Home Show
Coping With Miscarriage