Each March, the Register-Guard’s Home and Garden section publishes an issue that ties in with the Lane County Home Show. This article for the March 2014 issue features five local landscape companies that were setting up show gardens at the fairgrounds that were up to 400 square feet. The public could meander through these show gardens, talk with the landscapers and take away ideas for their own home gardens. 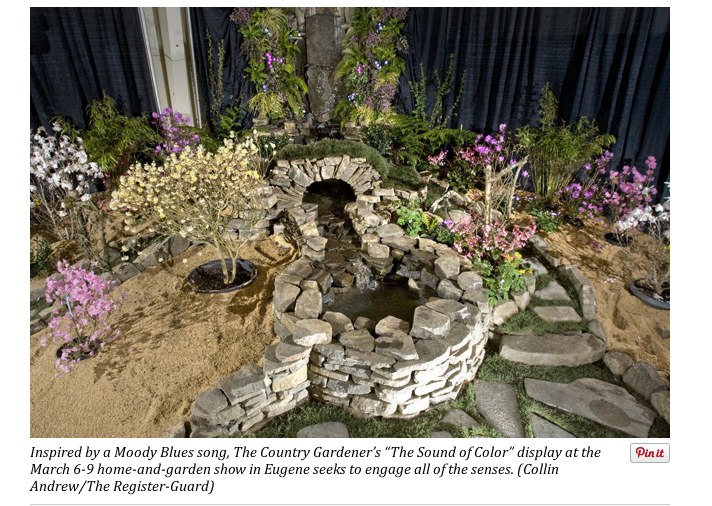 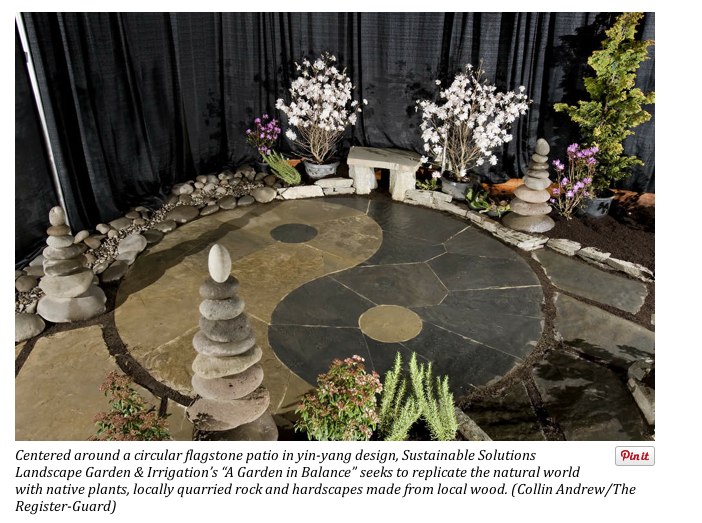 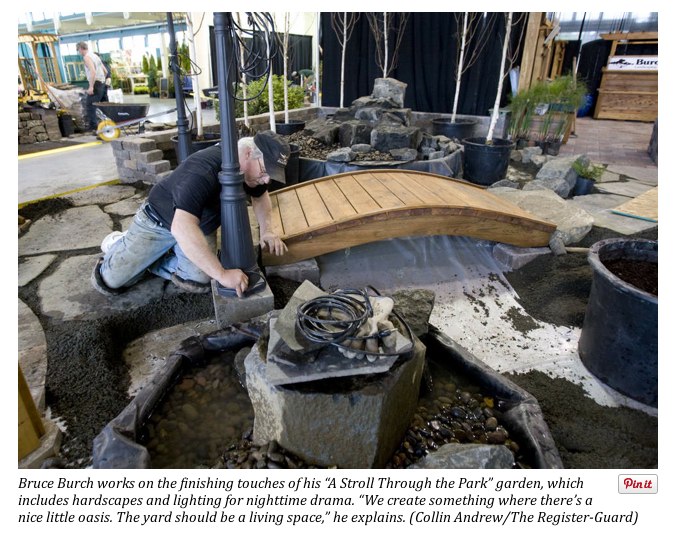 Local landscapers demonstrate how gardens can provide living space and engage all the senses.

Though winter’s chill is still clinging to the Willamette Valley, visitors to the Lane County Home and Garden show will be surrounded by warmth, color and inspiring ideas.

Home show organizers are turning the expo halls–the space that is used for livestock during the Lane County Fair–into a garden showcase. Five different local landscaping companies have each been allotted 300 to 400 square feet for their show gardens. Each has a theme, and each will highlight concepts that the landscapers try to convey through their work. The public will be able to meander through these mini landscapes, ask questions and leave with inspiration for their home gardens.

Eric Crawford, of Sustainable Solutions Landscape Garden & Irrigation, chose the theme “A Garden in Balance.” Crawford’s main centerpiece is a flagstone patio in the shape of a yin-yang symbol using bright yellow flagstone and dark blue slate. Crawford values local, sustainable and natural materials in his landscapes. “We want to make your personal landscape part of the natural world instead of artificial,” he says. “We do that by using local and natural materials.” Almost all of the stone for his rock walls comes from a quarry near Coburg, and other hardscaping such as fences and benches is made from local wood. Crawford utilizes primarily native plants sources from local nurseries in or within 30 miles of Eugene. Home show organizers require the displays to include a certain amount of flowering plants, so Crawford will bring in some non-native plants, but most of his plants come from Eugene’s Doak Creek Native Plant Nursery, which specializes in all native and all organic plants. He also sources plants from Armitage Nursery and Bloomers Nursery, which specialize in shade trees, conifers, ground covers and ferns.

Graham Landscape & Design chose the theme “Something Old, Something New, Something for You.” Seth O’Hare, who created the installation, believes that a well-designed landscape directly affects quality of life. Hardscapes and the natural forms of plants combine to create pleasing environments. “One of the key things that we do is our hardscaping and patio installations along with naturalistic planting,” says O’Hare. “We’re putting in a couple of patio areas and a really nice stream and water feature that blends through the landscape. It’s a tranquil garden.” The idea behind ‘something old’ is integrating recycled materials into the design. ‘Something new’ reflects modern patios, particularly geometric patterns. “In Eugene you basically get 150 days of sunshine but with a well-designed landscape you can extend your time outdoors considerably,” explains O’Hare. “Once you really explain how that works to people, they think, ‘Yeah, I can do that my house.’”

Martin Gascoyne of The Country Gardener found inspiration for his theme, “The Sound of Color,” in a Moody Blues song. He tries to bring all the senses to bear in a garden setting. “The garden isn’t just about color,” Gascoyne says. ”It’s about sound and it’s about feel. We like to create places for people to be in where they can enjoy all of it. It’s not just a place to look at, it’s a place to be in.” Gascoyne says that landscaping used to be all about plants and now it’s significantly more about creating spaces that are living extensions of the home, where people spend time cooking and entertaining. “They’re living more in the outdoor spaces, they’re demanding low maintenance but they want aesthetically pleasing,” he says, of the modern home owner. He also spends time understanding the homeowner’s goals, likes and dislikes: do they want an intimate space for four people or space for big parties, what colors do they like, is there traffic noise to cover up? His co-owner and wife, Karin Gascoyne, likes rock while Marty’s focus is plants. “We’re coming out of this horrible winter, one of the worst I remember in Eugene, and one of the deepest freezes ever and we want to wake people up to spring through a fusion of spring dreams and falling water,” he says.

Take the theme of Burch’s Landscaping Service, “A Stroll Through the Park,” and bring that to your home garden. “What we’ve developed is a park theme that you can wander through that highlights pretty much what we do,” says Bruce Burch. “As you stroll through there are areas to sit, a water feature or two, a bridge going over a river rock area, and I’m hoping to have some birds chirping.” Traditional park elements are arbors, benches and swings, and lighting that reveals drama at night. “We create something where there’s a nice little oasis. The yard should be a living space,” Burch explains, a place where the homeowners can perhaps get a different perspective. “People don’t think about going out and sitting in the back of their yard to sit looking at their house.”

Rather than trying to trick the eye into thinking it’s summer with plants in full bloom, Phil Duckworth of Duckworth’s Landscaping is embracing early spring as a transitional time of year with his theme, “Forest to Garden, Winter to Spring.” “Since it is so early in the spring there’s not a lot out flowering, things are just starting to bud out,” he says, “so we’re in that winter stage look.” Duckworth wants to highlight the fact that there are many ways to add color to a garden even if plants aren’t blooming, such as the use of dogwoods with dramatic yellow or red twigs, or birch trees with silvery bark. He recognizes that many people in Eugene live in wooded areas and may have shade in their yards, which make flowering plants unrealistic. “We’re going to demonstrate some of the things that are looking good this time in spring woods,” he says. “We’re showcasing a woodsy area along with a more formal manicured garden.” The “woodsy” part will have conifers, deciduous trees, ferns, a water feature and native plants. On the other side of the pathway is a more manicured garden with retaining walls, boulders and more formal landscape type plants.

Yoga Studios in Eugene – Moving Towards Stillness
Trash Into Treasure at St. Vinnie’s