By Vanessa on July 2, 2015 in Gardening, Register-Guard

This appeared in the June 2015 edition of the Register-Guard’s special monthly publication, Home & Garden.

Gary Jordan, a Master Gardener, uses clear plastic sheets to help warm soil around his sweet potatoes. Five-gallon jugs to the side previously were used as cloches for giving the plants a faster start. Photo by Collin Andrew/The Register-Guard

Sweet potatoes are one of the most popular vegetables today if the plethora of products such as sweet potato fries and sweet potato tots is any indication.

Though many Americans enjoy eating sweet potatoes, most don’t attempt to grow them, especially not in the mild, wet wilds of the Willamette Valley. Master gardener Gary Jordan is on a mission to change that.

Jordan, 72, graduated from the Lane County Extension Master Gardener program last spring. “I decided to pursue growing things that they say can’t be grown around here,” he says. He’s always had what he calls a bent toward being interested in sustainability issues, but growing his own food was not a big part of that. After the end of a marriage a couple of years ago, Jordan decided to dedicate himself to gardening. “I decided this is what I really want to do for the rest of my life,” he says. “Gardening and teaching and producing real food and explaining to people how important that is.”

And in the case of sweet potatoes, how easy it is, once you know the right technique. Jordan describes a pivotal moment in the history of sweet potatoes, which were popularized in America by George Washington Carver in the early 20th century. With the advent of refrigeration, though, came the sweet potato’s downfall. “They chill easily,” Jordan says. “People didn’t realize that, and you wind up with a hard core where you bake the sweet potato and you end up with hard parts in it.”

That sensitivity to cold is the top concern when growing sweet potatoes. Jordan’s method utilizes sheets of clear plastic vapor barrier from the hardware store, stretched tightly around the growing bed to heat up the soil and keep it hot. “They won’t start growing until you get (the soil) to 70 or 80 degrees, and they won’t grow well until they get to 100 and up to 115,” he explains. “In the fall they stop growing when the soil temperature reaches 60, and if they get under 50 you’re going to lose the crop.”

With a hot summer and fall likely ahead, it’s not too late to start sweet potatoes, he says. But hurry.

Jordan suggests inexpensive probes for tracking both soil temperature and moisture, which helps determine when watering is necessary. Before planting sweet potatoes, he runs soaker hoses on his garden row. Next he stretches clear plastic over the soil, cutting slits every 18 inches or so for the plants. Finally he places a little sand around each slit. He says black plastic is a little better at keeping heat in at night, but not significantly. Weeds will start to grow under clear plastic, but the soil surface gets so hot that they won’t survive.

After doing so much work to heat up the plants, don’t cool them off by watering with cold water from the hose. “Anything that cools them off is going to slow their growth down,” he says.

Water in black plastic tubs warms up nicely if set in the sun. Some people use more elaborate ways to heat water for irrigation, but any way of warming water with sunshine works fine, he says. Sweet potatoes do like to be watered frequently, he says.

Curing sweet potatoes is the last important step. A misconception is that the tubers must be dried. In fact, the goal is to seal off the skin so that the moisture stays in. “That moisture can allow the long-chain starches to break down into more sugars,” he says. “That’s when you get the sweet flavor.”

Once harvested, put the sweet potatoes in a room that’s at 85 to 95 degrees with a humidity of 80 to 85 percent for five to seven days. “In the South you can achieve that almost without trying,” he says. But here, try putting the potatoes in a closet with a heating element and a bucket of water. Research shows that sweet potatoes can also be stored at 75 to 85 degrees for three weeks. “That worked OK, but they discovered it can be done faster,” says Jordan.

Once they’re cured, cook sweet potatoes however you like. Jordan is partial to baking them, but he doesn’t care how people cook them as long as they eat these nutritional powerhouses and feel empowered to grow them themselves.

“It’s an amazing vegetable,” he says. “It’s got so much potential, you simply need to know what it needs.” 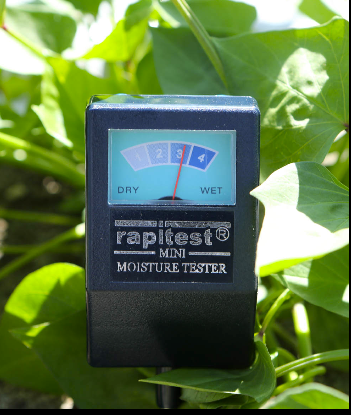 A Barrage of Blueberries
Acting as Therapy