By Vanessa on July 2, 2015 in Boomer and Senior News, People Profiles, Retirement, Seniors

This appeared in the June 2015 edition of Lane County’s Northwest Boomer and Senior News.

Not an Actor? Linda Burden-Williams says we all can benefit from learning more about ourselves. 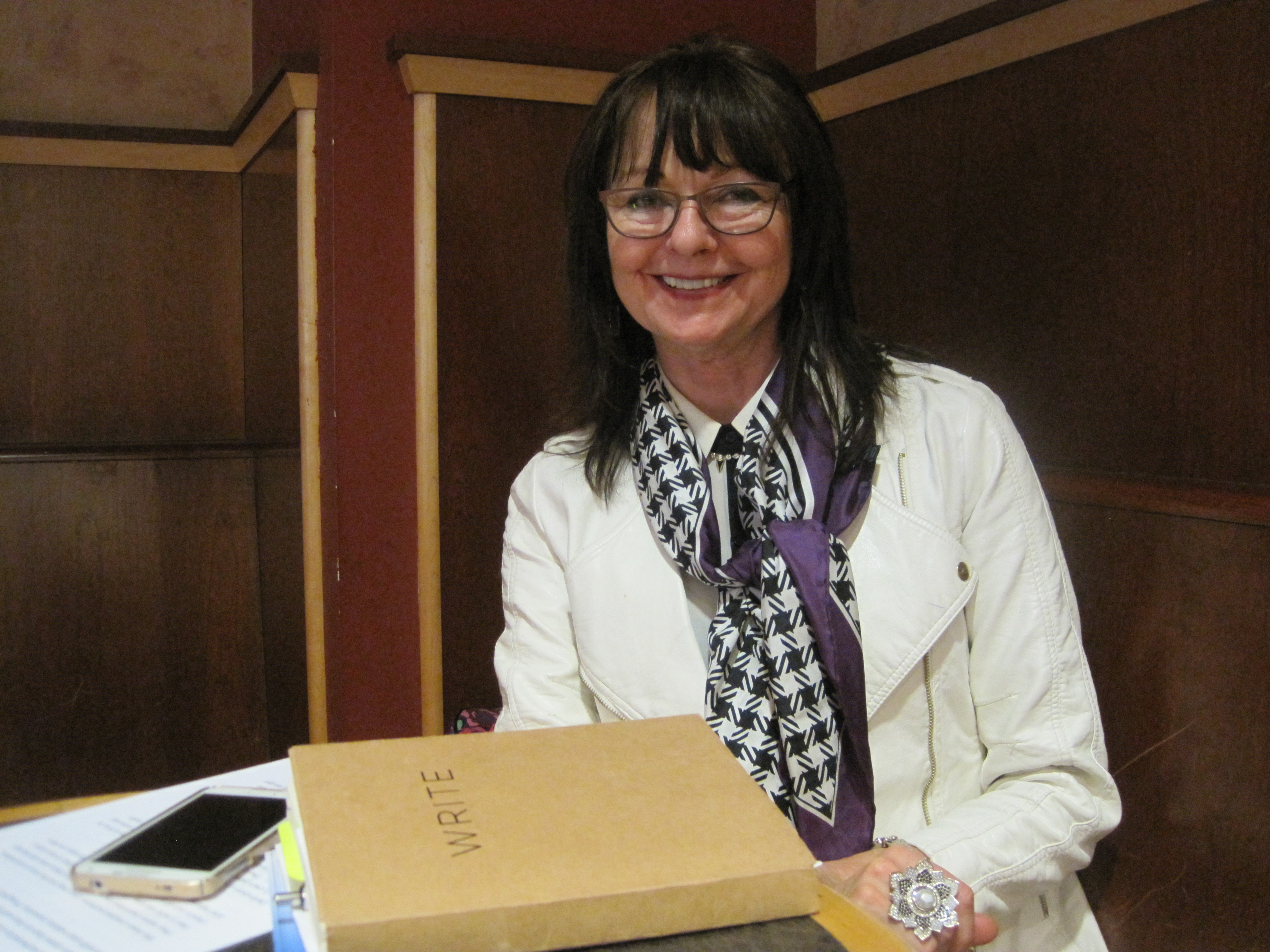 Actress and acting coach Linda Burden-Williams, 63, is stylish and vivacious. With her dark hair in a smooth bob and dressed in black leggings, black boots, a white jacket, purple and white socks and a purple-patterned scarf, she looks and acts decades younger. “Sixty three doesn’t seem so old to me now,” she says with a laugh.

She played bass guitar and after graduating high school in Marysville, Washington, in the 1970s, went out on the road with an all-girl rock band called Iron Maiden. “We were playing rock ‘n’ roll at the same time and the same clubs that Heart was playing,” she says, “but we didn’t have our original songs yet.”

Despite those accomplishments, Burden-Williams just didn’t feel like herself. “In my head I felt way bigger than what I was doing,” she says. “It just seemed limited. I didn’t know how to get out of my box.”

Burden-Williams grew up shy and reserved, the result, she says, of an excessive spanking and punishment as a very young child. “My dad spanked me too hard,” she says. “I remember sitting in a hallway going, ‘Now I know what I have to do to be safe. Just do everything they say.” She submerged her own emotional wants and needs, and began what she calls “building a false life.”

In 1981, someone told her about an acting class where she might learn about herself. “I said, that’s interesting, I’ll try it,” she says. “I went there one day and I went, ‘Oh my God! I found home!”

Through acting Burden-Williams found a safe place to express herself in deeper, richer ways than playing music allowed. “With my music I was just playing my bass and I loved it but I wasn’t using my voice, my body, my mind, my emotions as much,” she says. “When I found acting it was a safe place to find out who I was.” The teachers thought she wouldn’t last. “I was shy and I had no concept of what an actor did,” she recalls

She’s been acting now for 30 years and has taught acting to countless students through her own school, In Focus Acting. Acting helped her recover from that childhood trauma. “I started acting because of the therapeutic value of it,” she says. “Children can suffer a lot and it can be very painful and they can keep that all their life and that’s why acting was so important—to realize that it is a past event and I don’t have to live it over and over but if I do choose to live it over I can use it in my acting.”

She met her husband of 36 years, Gary Williams, on the road. They bought a place in Veneta and their son, Garrick, went to school in Elmira. Burden-Williams took him to Los Angeles off and on, where she homeschooled him while she auditioned. Her first feature film role was in the 1990 science fiction movie “Class of 1999” with Malcolm McDowell and Stacy Keach. Other credits include the movies “Physical Graffiti” and the television shows “ER” and “The West Wing.”

She says she wasn’t a natural at acting. She had to work on it because of her history of stuffing down her feelings. “It took me almost three months to get angry and my body got physically sick from trying to express it,” she says. “I’d get stomach aches and headaches because I had suppressed that emotion.”

She found film more challenging than theater because with theater, most of the work seems to be about reaching the 50th seat with a big expression. Film, on the other hand, requires deep inner emotional work coming through the eyes and voice. “I’ve studied a million different techniques,” she says. “I’m kind of an encyclopedia of them all.”

When Garrick was in third grade she started teaching acting to a group of kids his age at her home. In time, she developed Creative Kidz for 3 to 5 year-olds to help them develop skills to face the camera and then classes for adults. “I started doing showcases here in town and I would invite anybody that needed actors,” she says, like companies that produce educational videos. “I’d bring my 2 year olds to adults and they’d all do scenes.”

Eventually, she became known as a person who could provide actors, so she got started in casting. Because she can’t always find the scenes that she wants her actors to use when working on certain things, she started writing. She’s also produced. Now, she’s written screenplays and is currently writing, filming and acting in a web-series of videos called “The Watched” that she is seeking funding for. “It’s about a time in the future when the government is shut down and the media has taken over daily life and everyone is watched and given “ratings” based on their lives,” she says. “If you have a fancy car and a nice house and great clothes it’s because your ratings are high. People do drastic things to keep their ratings up.” If your screen goes black you’re Unwatched. There’s also the Darkened, or the underground people that choose not to be watched, and the Enlightened, a group of people attempting to live without cameras in their lives. “It’s a good-evil kind of story about losing our humanity through fame and fortune.”

Linda Burden-Williams says the main thing about acting in her schools, or about acting in general, is that it is a safe place where judgments are put away. “You need to delve into parts of you that you might not want other people to see,” she says.

Locally, Burden-Williams has worked with well-known stage and commercial actress Storm Kennedy, who says in a testimonial that she became a self-confident and expressive woman through taking Burden-Williams’s acting classes. An 86-year-old woman named Elfrieda wrote that the time spent in Burden-Williams’ acting class was “a most inspiring experience.” “It wakes the inner inhibition up to do some things in front of an audience,” she wrote. “I found myself having so much fun getting into this improv.”

Burden-Williams says that lately she’s been working with more women her age who are wanting to explore their emotions. “I do private classes so we can really look at where are you stuck, where do you want to go,” she says. “I’m working with a reverend who doesn’t feel her power. She’s very soft-spoken and she doesn’t get her point across. I work with people like that who just want to express themselves a little more fully.”

She also believes that anyone can benefit from acting classes, and her latest courses are focused on developing confidence and leadership abilities for people in the business world and anyone who isn’t interested in acting professionally but wants to become more in touch with their emotions. “You learn your mind and you learn your body, so it’s your instrument to create your character for this moment in time,” she says. “When you say those words in your dialogue and then to go into your real life you can be more confident and understand that everybody has pain, everybody suffers and you’re not alone. I think acting is beneficial for anyone in the whole world!”

In Focus Acting
Skills for camera acting and production
(541) 954-4685
www.infocusacting.com