By Vanessa on July 2, 2015 in Boomer and Senior News, Retirement, Seniors, Travel

This appeared in the June 2015 issue of Northwest Boomer and Senior News.

This tiny town is big on nature, and more entertainment options are just around the corner. 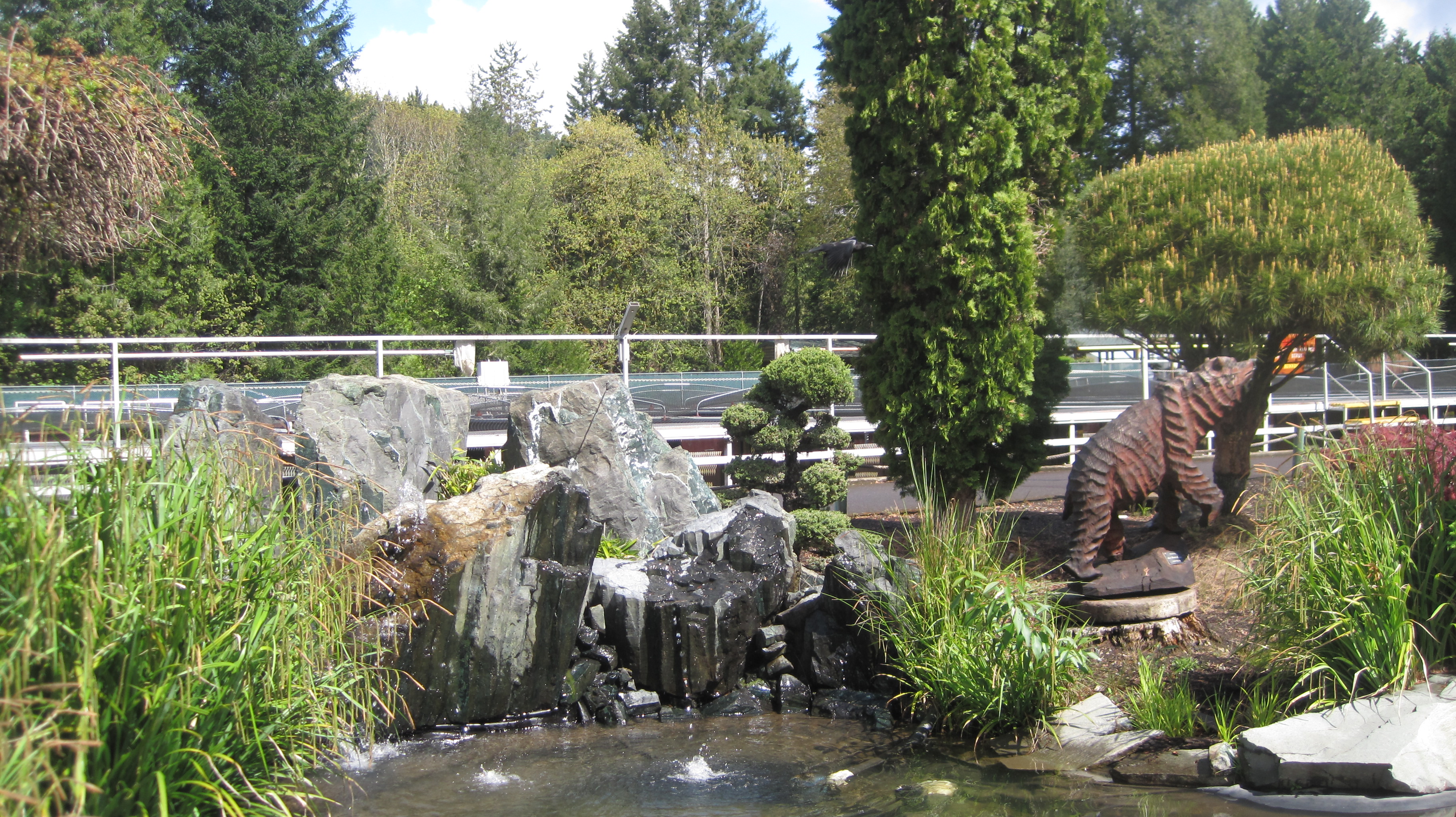 Holding tanks at the Willamette Fish Hatchery contain salmon or trout that are raised and released to compensate for the loss of habitat in the middle fork of the Willamette River. The grounds of the fish hatchery are park-like, with wood carvings and picnic areas. Photo by Vanessa Salvia

A few years ago, Oakridge began quietly rebranding itself as the “Mountain Biking Capital of the Northwest” in an effort to attract people to some 350 miles of trails that surround this tiny town. They’ve been successful, but they could just have easily rebranded as “Hiking Heaven” or the “Land of Endless Views.”

Nestled in the foothills of the Cascade Mountains on the banks of the Middle and North forks of the Willamette River, Oakridge, with about 3,500 residents, is less than an hour’s drive from metropolitan Eugene. The town is completely surrounded by thousands of acres of national forest lands with hiking, fishing and winter sports, a golf course, a fish hatchery, a small museum near at hand. New attractions, such as a walking tour of the Uptown Historic District and a lawnmower racing track, are combining to make Oakridge a great place to spend a day or weekend.

Vicki Burns, a volunteer at the Oakridge Chamber and an employee of the town’s Dead Mountain Echo newspaper, says there’s a lot to do all year long. “We have concerts in the park’s amphitheater, a car show on July 1 and the December 1 bridge lighting is really fun,” she says. “There’s music, bonfires and hot chocolate. In the summertime there’s really awesome swimming holes up Forest Service Road Number 19. There’s a lot to do.”

Derrick Bell and Eugene Cathcart are employees at Willamette Mountain Mercantile, the town’s bike shop and supplier of maps and gear for outdoor adventure. The pair look out the shop’s window at the Cascade Mountains that surround the town, which, at an elevation of about 1,500 feet, is above the fog line that blankets much of the rest of the Willamette Valley in winter. “It’s pretty nice,” says Bell. “That’s the big bonus to Oakridge . . . everywhere you look there’s a view.”

The staff at Willamette Mountain Mercantile have trail maps and are knowledgeable about the many trails for both hiking and biking that are nearby. “We can help you figure out good places to go,” says Cathcart.

Bell, 48, suggests that those who aren’t mountain bikers can enjoy just riding around town. “Traffic’s slow,” he says, “just do something casual. But, there’s more people that live here that are over 60 that mountain bike. There’s definitely a lot of people in this town that are very active.”

Quin Slocumb, 38, owns Upstream Adventures, offering rafting, canoeing, kayaking and fishing on the Middle Fork of the Willamette River as it flows through town. “There’s no experience necessary for our trips,” Slocumb says. “We take young kids and older folks as well. We also offer scenic floats for people not necessarily looking for a white water thrill ride, they just want to get on a boat and float down the river and enjoy the scenery.”

Slocumb has been navigating rivers since he was a teenager growing up in Tennessee. For rafters who don’t want to paddle as much, stern frames can be added to the raft so the guide does nearly all of the work. “They can still participate and paddle, but it’s not so much required for the powering of the boat,” he says. “We gear the whole style of the trip to what to each group wants and needs, but it’s a good introduction to white water in a beautiful place.”

The half-day rafting trips only take about two and a half hours, leaving plenty of time in your day for a hike, a visit to the museum (open on Saturdays) or a beer at the local brewery, Brewers Union Local 180. 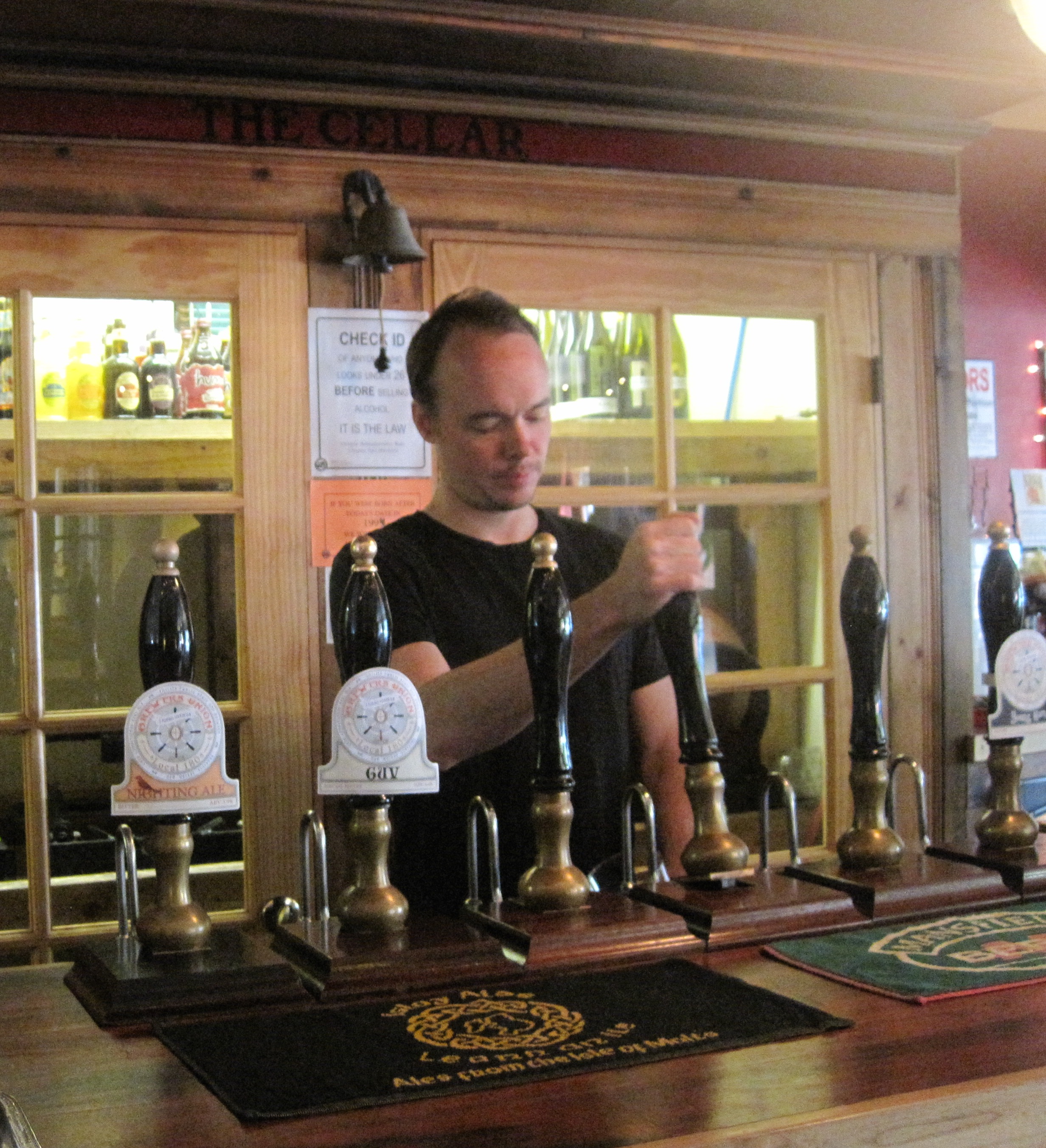 Austin Smith, a brewer at Oakridge’s Brewers Union Local 180, pulls the tap handle on one of their traditional English-style cask conditioned ales. Photo by Vanessa Salvia

Seven years ago Ted Sobel, an Oakridge resident since 1991, opened up a three US barrel brewery offering English-style cask-conditioned ale. “I’m a bit of an Anglophile, I love going over there and I love cask beer,” he says. “Cask beer is the national drink next to tea.” He’s also a country boy, he says. He wanted to be in the mountains but not far from a college town. “We can pop down the ditch, we call it, if we want to go to Eugene,” he jokes.

People unfamiliar with cask beer think it’s “warm and flat.” Sobel explains that cask beer is served at “cellar temperature” of 50 to 55 degrees. “It’s not warm but it’s not cold,” he says. “It’s right there in the middle. It’s cool and it’s lightly conditioned.” In typical beer from kegs, the carbonation is forced into the beer so it comes out bubbly. With cask-conditioned beer, the natural bubbliness comes from the residual yeast and sugars still present in the beer. “You are essentially drinking right out of the secondary fermenter,” Sobel says. “It’s a fresh, living product with no preservatives and no filtering. People told me, ‘Ted, don’t brew your beer here, no one will drink it!’” he says with a laugh. “Now we’re known for it. We’re a destination. People come here from all over for this.” 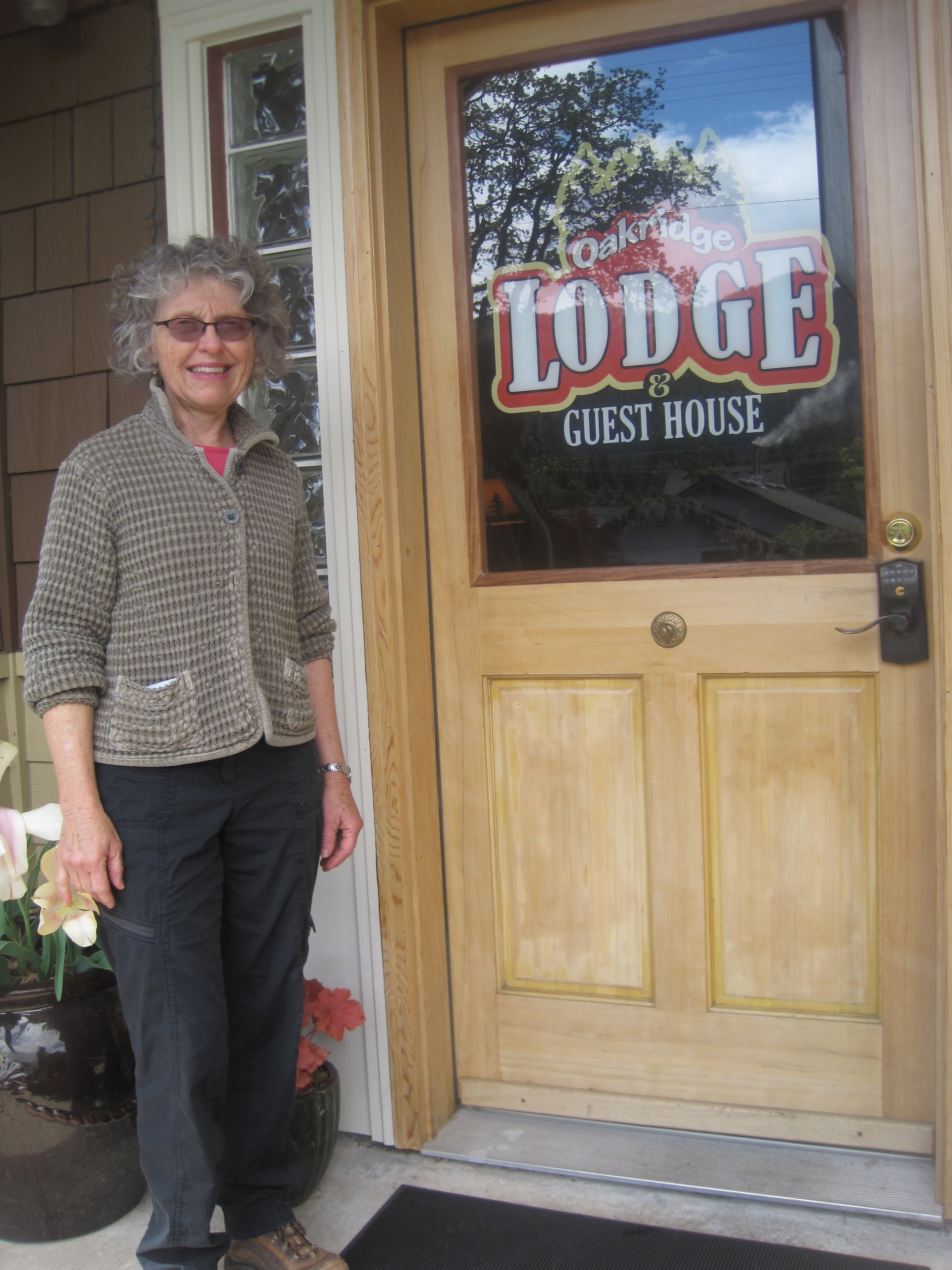 Lynda Kamerrer and her husband own Oakridge Lodge and Uptown Bistro. They have been active in bringing new attractions to the city, such as a walking tour of the town’s historic Uptown District.. Photo by Vanessa Salvia

The brewery is just a couple of blocks from the Oakridge Lodge and the Oakridge Museum. Lynda Kamerrer, 65, and her husband, Gary Carl, 71, bought the lodge in 2009. The building was originally built in the 1950s as a Masonic Lodge. The lodge is open for guests from May through October, and offers five rooms with flexible sleeping arrangements to host a single person or up to six people in some rooms.

Kamerrer and Carl, who have lived in Oakridge since 2008, installed a wood-burning pizza oven and are operating the Uptown Bistro on the lodge property, serving flatbread pizzas and il forno dishes such as lasagna. “We have both indoor and outdoor seating. Our dining room accommodates about 20 people and our patio seats an additional 25,” she says. “We have a very nice garden and most people comment on the surroundings as being the attraction for coming here to eat.”

The lodge offers outdoor locked and covered bicycle storage. “A high percentage of our guests including folks 50 and up are very active and they enjoy either road cycling or mountain biking, fly fishing, hiking, and all kinds of active outdoor sports. There’s a lot to do out in the forest.”

A guided walking tour will encompass the museum, lodge, brewery and a new distiller, Deep Woods Distillery, that is set to open with a tasting room and retail store offering a range of distilled spirits made with local ingredients as early as June. “This used to be the main street in Oakridge,” Kamerrer says. “A retired gentleman who also lives in the neighborhood will conduct guided tours to add a little characterization to the people who made history here.”

Kamerrer is trying to get the Amtrak train, which rolls through, to add in a stop in Oakridge. Eugene’s Lane Transit District may begin offering a connection via Eugene’s downtown station, so people riding the train can get off in downtown Eugene and ride the bus to downtown Oakridge in about an hour.

There’s currently no movie theater in town, but entertainment is on the horizon with the opening of the Oakridge Raceway. The multi-use racetrack and indoor skatepark is under construction, with the season set to open May 30. The land, which is being rented from the city by a group of investors and entrepreneurs, will include a drag strip, lawnmower racing, motocross track and more.

Kamerrer and Carl are helping to install webcams on the radio tower at City Hall, which will provide an instantaneous look at local weather conditions. “There’s no camera between 1-5 and Willamette Pass currently and we have quite an elevation change, from 400 up to 5,000 feet,” she says.

The Oakridge Pioneer Museum, a small but scrappy volunteer effort, is moving to a new location to expand their space and remodel their existing space. “The first settlers here were in the 1840s and quite a lot more came after that,” says curator Pat Morrison. The museum has many items related to logging, carpentry and millwork and Oregon’s early days, including a replica of a general store, and a Prairie Schooner covered wagon that probably came across the Applegate Trail, which was traversed in the 1840s. The museum has a few collections of clothing from the 1800s and a large collection of arrowheads. One exhibit covers many years of chainsaw evolution. The second Sunday in July is the annual museum picnic. “Bring a plate and a spoon,” says Morrison, and for a nominal fee that supports the museum you’ll get a delicious barbecue chicken dinner.

For visitors with children or without, the Willamette Fish Hatchery is a fun and interesting way to spend an afternoon. One of more than 30 fish hatcheries operated by the Oregon Department of Fish and Wildlife, this one raises salmon and trout for release into local waterways. The area provides a tank with large sturgeon and trout for viewing and feeding, a covered picnic area and an easy and accessible hiking trail on-site. A mini-golf set-up walks players through the lifecycle of a salmon, complete with predatory obstacles and traps.

For decades after World War II, Oakridge was a booming lumber town. There’s no doubt that the town struggled following the collapse of the timber industry in the early 1990s. Businesses closed up shop and families moved. Now those same wooded hillsides are providing a different kind of economic support.

Logging is not nearly as big a part of Oakridge’s history as it used to be, and this town has had to reinvent itself in creative ways. It has done so, and now, whether you call this town the “Mountain Biking Capital of the Northwest,” “Hiking Heaven” or the “Land of Endless Views,” there’s tons of fun to be had by anyone.