By Vanessa on July 2, 2015 in Eugene Magazine, Home Walkthroughs

This was the cover story in the Summer 2015 edition of Eugene Magazine. 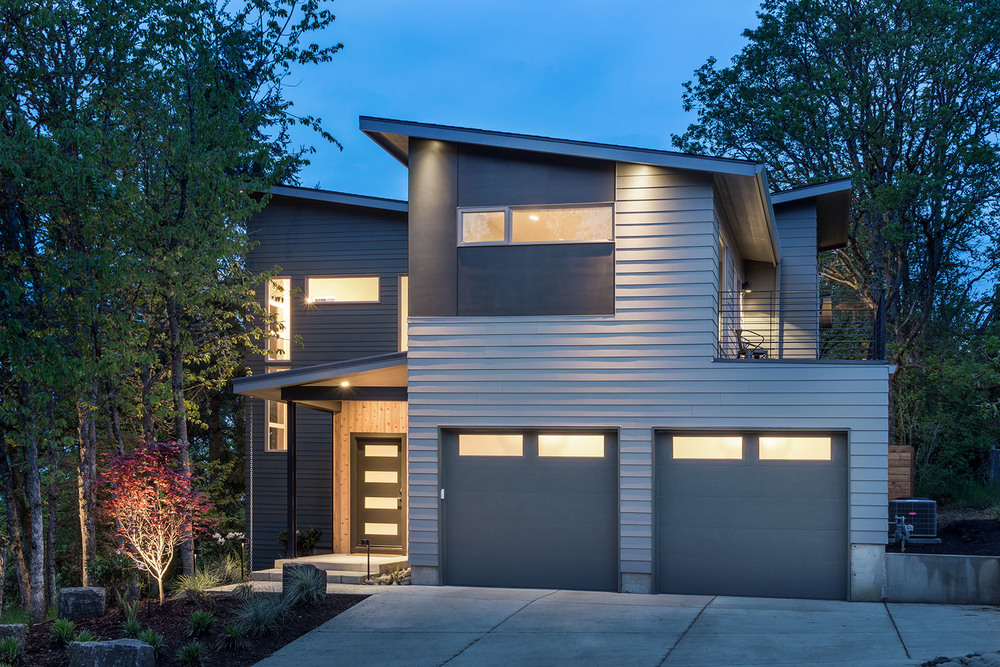 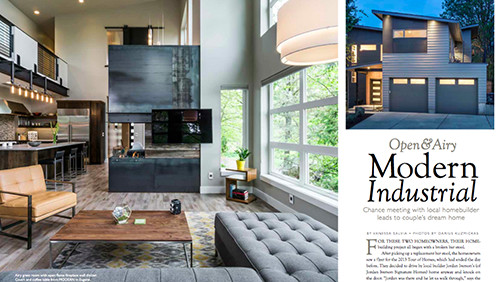 A chance meeting with a local homebuilder led to a couple’s dream home.

A broken bar stool led two homeowners who weren’t interested in moving to the steps of a home built by Jordan Iverson of Iverson Signature Homes in Eugene. That chance meeting kicked off a relationship that led to a new, industrial modern home built to perfectly suit the homeowners’ needs and desires.

After picking up a replacement for their broken bar stool, the homeowners, who wish to remain anonymous, happened to see a flyer for the 2013 Tour of Homes, which had ended the day before. They decided to drive by Iverson’s home anyway and knocked on the door. “Jordan was there and he let us walk through,” she says. “My husband said, ‘This is amazing.’ We weren’t thinking of building or moving but I said if I did I would move into something spectacular like this.”

Iverson suggested they consider a lot abutting Gillespie Butte Park in Eugene. She didn’t even go look at the site for nearly a month because she was totally against buying, building and moving. But the limitations of their Ferry Street Bridge home became more apparent. “That house was not an open floor plan and we really wanted that,” she says. “We had people over all the time and anything more than the family looked crowded. I wanted a functional outdoor place that we could use all year round that was easy to maintain an we didn’t have that. Also, their boys, ages 12 and 9, didn’t have their own rooms.

Their new, 3,200-square-feet house has everything they wanted and more. The kitchen, master suite and living room are on the lower level, while the boys’ bedrooms are upstairs, along with a guest room, library, rec room and fitness space. “I totally trusted Jordan,” she says. “I told him how many rooms I wanted and I said, ‘Make it spectacular.’ We get views of this beautiful park on all sides. That’s one of the biggest reasons we chose to build, because it’s hard to find property like this.”

Some design elements appear throughout the home. Shelves and built-in cupboards and cabinets are floating, because the homeowners appreciate an open, airy look. There are few drawers. The color scheme is variations of neutral grey and beige, with pops of red in pillows and light fixtures. A console table in the library echoes one in the master bedroom, providing visual continuity throughout the home. Steelwork on the patio railings is consistent throughout the upper and lower outdoor spaces. “That’s a huge part of what we do,” says Iverson. “We use the same materials in and out.”

The fitness room, big enough to hold a treadmill and wall-mounted television, overlooks the main floor through an opening that can be covered with a custom sliding barn door for privacy.

The homeowners wanted plenty of space for books, so a library was a must. A table in the library was designed by Iverson and custom-built by Chad Basom of Kustom Kraft Cabinets in Eugene. The shelving is rustic hickory with a custom ebony stain. Flooring is a light-colored pre-finished engineered wood.

The upstairs patio connects from the guest room with full bath to the lower outdoor area via a small walkway. A thin layer of composite concrete on the outdoor patio was hand-troweled on by Eugene concrete artisan Bill Fairchild for a unique finish that can later be stained any color desired. The steelwork on the rails was custom designed by local metalworker Jason Elliott.

Downstairs, the focal features are the steel fireplace that divides the main room into two smaller seating areas. The fireplace is an ethanol-burning insert sourced from Iverson’s boutique interior design shop, Remarque. Iverson designed two stunning lighting features, one over the kitchen island featuring long, linear Edison lightbulbs and the other over the dining table featuring traditional pear-shaped Edison bulbs hanging from red-wrapped cord. Iverson has designed similar wrapped-cord lights for other homes he has built. “I don’t even have words for them,” she says, of the light fixtures. “I can’t choose a favorite between the two, I like both.”

One side of the kitchen island is lower than the others, to accommodate the wife’s smaller stature. The bar stools from Modern that brought the homeowners to this house hold court alongside the island. She also requested a large Sub-Zero refrigerator and no upper cabinets.

“I like it open and clean,” she says. “I like to not accumulate junk so it’s best if you don’t have places to store it. I like the minimalistic approach and that’s why Jordan really works well for us because he doesn’t do anything that’s more than it needs to be.”

The master suite has some special design touches. Reclaimed barnwood sourced from a farm in Walton, Oregon, by project manager Chris Langenberg hangs on the wall above the bed. “I really wanted Jordan to use some rustic barnwood details so this came together really well,” she says.

She splurged on two completely flat Ferguson by Kohler sinks. “I really love the sinks that I picked,” she says. “That was a big deal. People keep asking me why I like the flat ones and it doesn’t bother me at all.”

It was imperative that there be no under-sink cabinets. Instead of a tub, she chose dual showerheads and a carefully selected pebbled floor. “I really wanted pebbles so I stood on a bunch to make sure they didn’t have too much character,” she says. “If they’re too rounded it starts to hurt. The small details, as painful as they are, even when you go back and forth over it, are worth it.”

Iverson uses only larger tiles in his bathrooms, typically 12-x-24. “I like the linearity of them and how you can stagger the patterns,” he says, “and there’s less grout lines.” Another of his signature barn doors separates the bath from the sleeping area. “These barn doors have become a trend,” he says, “but we try to make it a little different, with different hardware details.” In this barn door is an Ecoresin panel embedded with actual pieces of swirled black string.

For the main living and dining area, the wife chose a grey sectional from Modern and a concrete-topped table with a salvaged wood base from Restoration Hardware.

Nick Williams of Cutting Edge Landscaping and Design in Eugene understood their style and designed a stainless steel firepit and water feature with a rusted patina. A zinc-top table from Pottery Barn anchors the space.

“I love, love, love Jordan’s work,” the homeowner says. “If I were to build again it would not be with anybody but Jordan. I like the clean lines and a little bit of the industrial touch. It’s modern.” 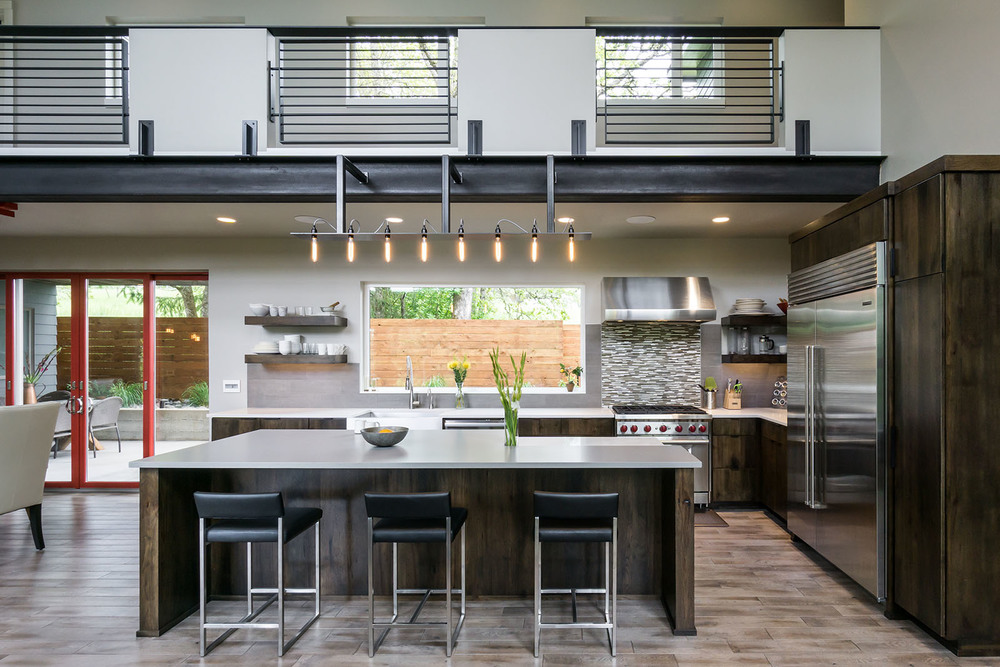 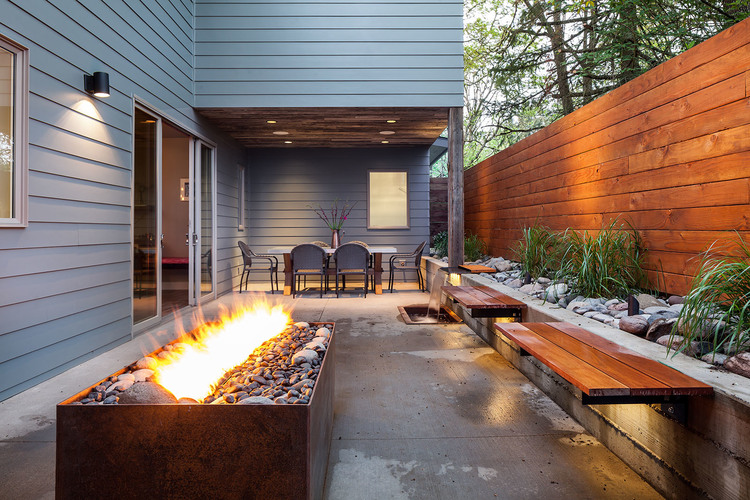