By Vanessa on January 12, 2016 in Boomer and Senior News, Seniors

Published in the November 2015 issue of Northwest Boomer and Senior News. Meeting and shaking the hand of 93-year-old Lt. Col Retired Mike Reuter, who experienced the Battle of the Bulge first-hand and later received the Knight of the Legion of Honor from the French government, was a true honor. 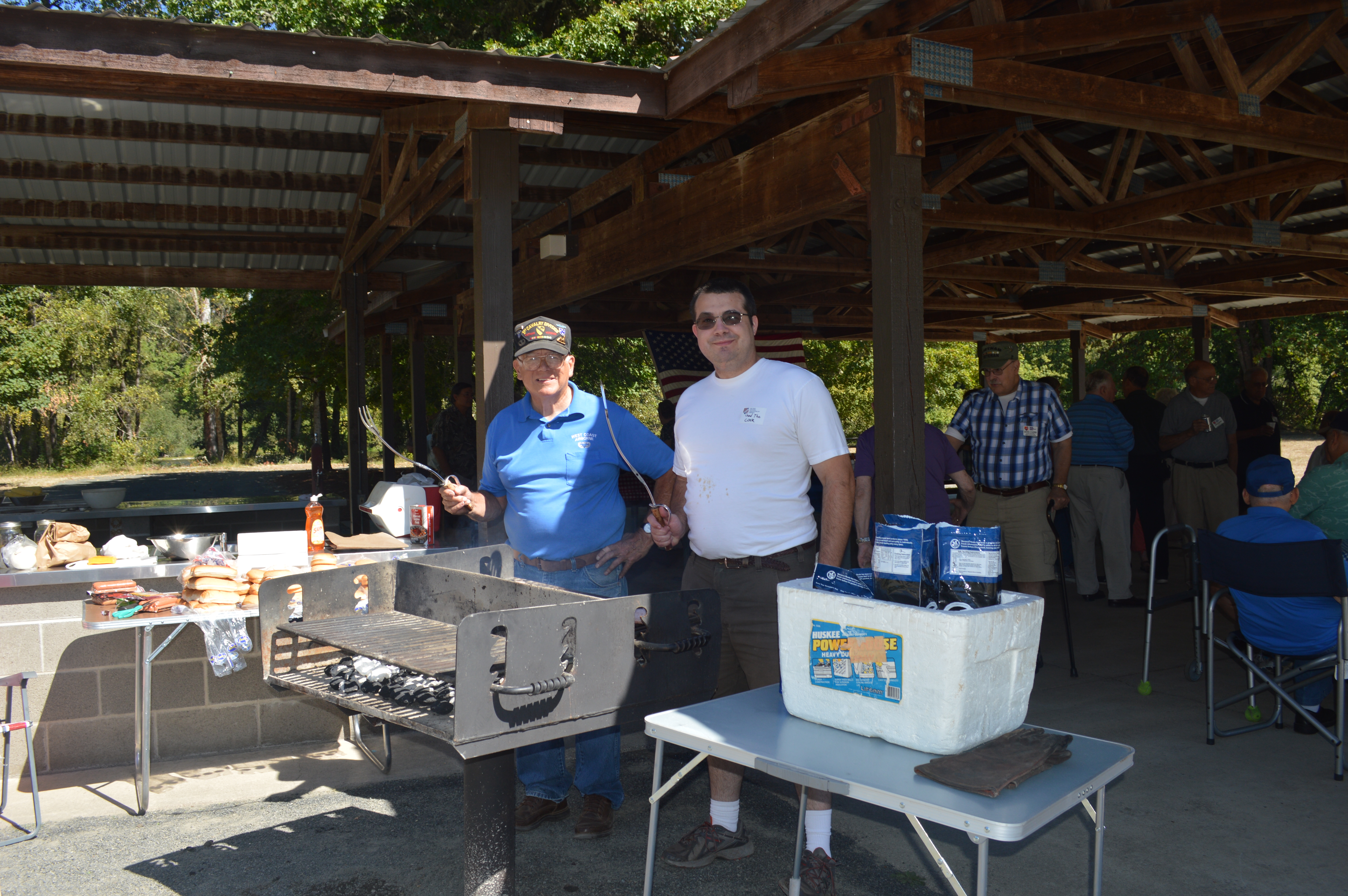 Pat Simpson, a retired U.S. Army Lieutenant Colonel, on left, and Chad Cooper, son of David Cooper, who retired from both the Army and Air Force, man the grill at the September MOAA picnic. Photo by Vanessa Salvia.

The annual picnic of the Military Officers Association of America’s Eugene chapter begins with a few words spoken to greet everyone, lots of laughter and the Pledge of Allegiance. The approximately 50 attendees, all current or former military officers and their families, introduced themselves then dug in to plates of hot dogs and hamburgers, corn and cookies.

Richard Norton, who goes by Dick, is the chapter president who addressed the crowd before everyone tucked into their lunch. He spoke about their work to raise funds to build a replica of the Vietnam Memorial in Eugene and their upcoming Thanksgiving sale to raise money for the ROTC scholarships they fund. Later, he spoke about how important it is for members of the military to have groups like MOAA to keep an eye on legislation that affects the military, and equally importantly, to provide camaraderie for veterans with other veterans.

“I spent 39 years in the military and when you retire it’s kind of a shock to the system to not be around the uniforms,” says Norton, 75. Norton was an enlisted soldier in the Air Force for 16 years before getting a commission. He retired after 39 years as director of logistics with the 173rd fighter wing in Kingsley Field Air National Guard Base in Klamath Falls. He’s been in MOAA about 10 years. 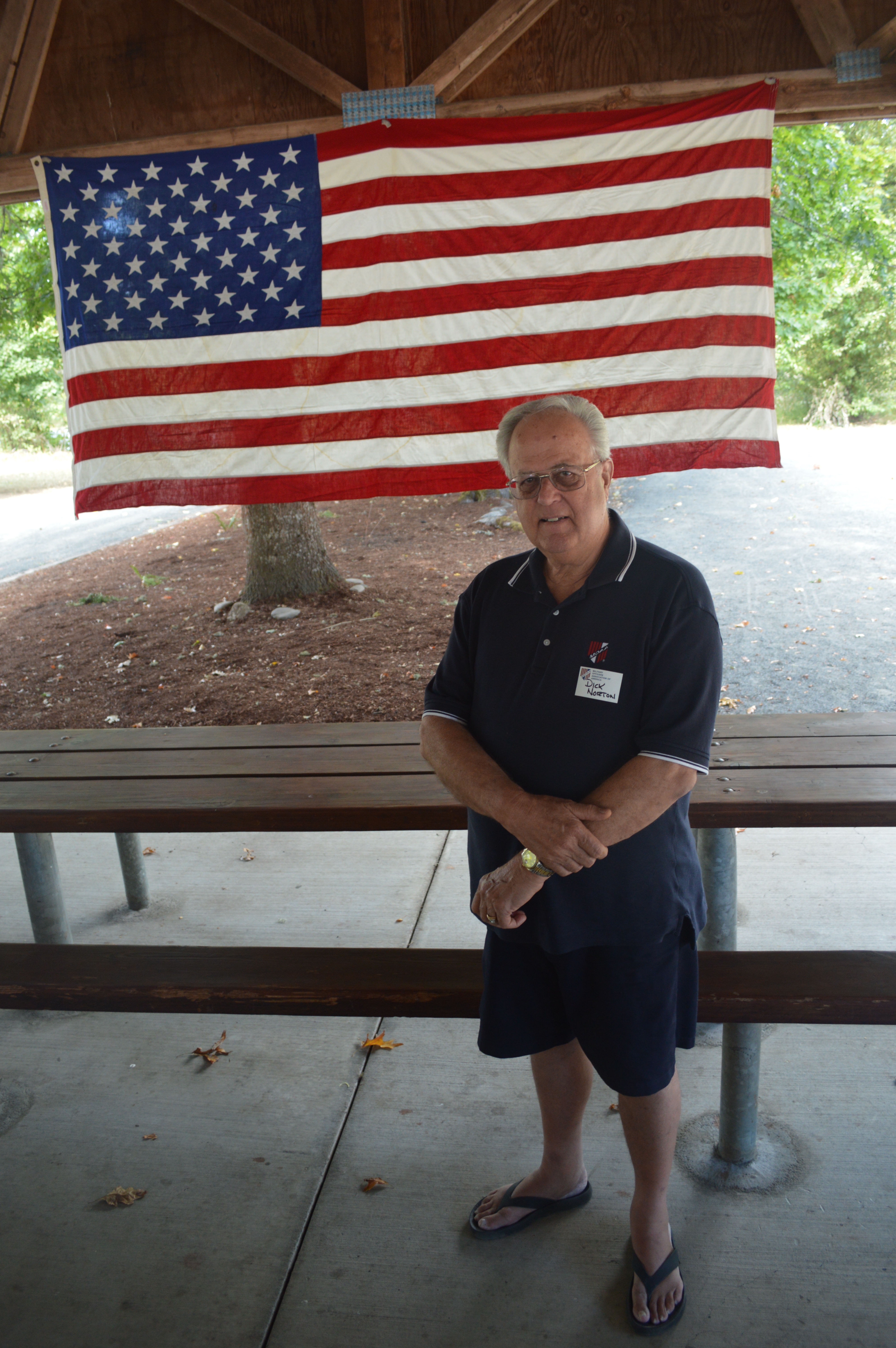 Lt. Col. Dick Norton retired from the U.S. Air Force. He is president of the Emerald Empire (Eugene) chapter of the Military Officers Association of America and gave opening remarks at the September picnic attended by chapter members and their families. Photo by Vanessa Salvia.

“MOAA was specifically designed to look out for the retired enlisted and officers of the military service, of all services, past, present and future,” Norton says. MOAA staff keep an eye on legislation that will impact, negatively or positively, the current or future military members. “‘The loudest voice on the hill,’ we call it.”

MOAA has about 390,000 members nationwide and expects to break 400,000 by the end of this year. Norton says the Emerald Empire (Eugene) chapter has seen steady growth in recent months. Twenty-seven new members have joined over the past year, which Norton believes indicates that people are concerned about how the military is being affected by Congressional legislation.

The chapter has plans to install a replica of the Vietnam Memorial at Skinner Butte Park in Eugene next September. They hope to get approval from the city of Eugene soon, and begin raising funds for the estimated $30,000 for materials and installation of the 146-foot-long wall. Two yearly sales that are coordinated by Marcy Prevics raise funds for two $1,000 University of Oregon ROTC scholarships that are given to worthy juniors each spring. Prevics is also raising funds so that the Eugene chapter has $25,000 in the scholarship foundation, which was formed by MOAA member Dick Kimbell in 2007.

Prevics got involved with MOAA because her father, Martin Prevics, who retired from the U.S. Army as a Lieutenant Colonel, was one of the charter members in the early 1960s. “I would come home from college and attend some of the picnics and do all those sorts of things with him,” she recalls. “He was very active for many years.” Martin had open-heart surgery in 2001 and no longer drove from then on, so Marcy would take him to the chapter’s monthly luncheons held at the Veterans Memorial Building in downtown Eugene. “He really enjoyed MOAA and especially the luncheons and things,” Prevics says. “I became his chauffer, so over a period of seven years until he passed away I would take him to the lunches or whatever event they happened to have.”

After he passed, Prevics missed the camaraderie as well, so she began attending the luncheons on her own. Not long after that, someone asked Prevics if she would make a few phone calls to invite people to the next luncheon, which she did. Then she was asked to take over as calling committee chair, which also meant she had to attend the board meetings, which she did. Then at one of the board meetings they happened to mention that they needed more money for the UO ROTC scholarship foundation. She quickly volunteered her fundraising services and they’ve since been holding successful summer garage sales and a Five-Star Holiday Sale near Thanksgiving.

Last year’s garage sale brought in around $2,000 dollars. Any money above and beyond the $2,000 to fund the scholarship goes into the scholarship foundation, to keep that funded into the future. The holiday sale includes fine goods such as pottery, jewelry, photography, soaps, lotions and skin care, wood items, paintings, jams and jellies. “Wonderful cakes!” Prevics stresses. “This will be the third year for the holiday sale and we have grown so much that we have moved from the downstairs room to the upstairs ballroom,” she says. Prevics has rented 12, 10-by-10-foot spaces all rented and 8, 8-foot tables. One table will be specifically Christmas items. “The community has been wonderful in backing us up by giving us items that we can auction off in silent auction or raffles,” she says. “People and businesses have given us so many wonderful things to offer at the sale.” Prevics is happy to accept donations from the general public—leftovers from garage sales, moving, cleaning house, etc—to store for the sales.

MOAA holds lunches at Eugene’s Veterans Memorial Building on the second Wednesday of every month, except during July and August. In September, the group holds their annual picnic at Jasper Park in Pleasant Hill. “Most of us, when we retire we miss the association of people who have done the same kinds of things,” says Lieutenant Colonel Pat Simpson, U.S. Army, Retired. 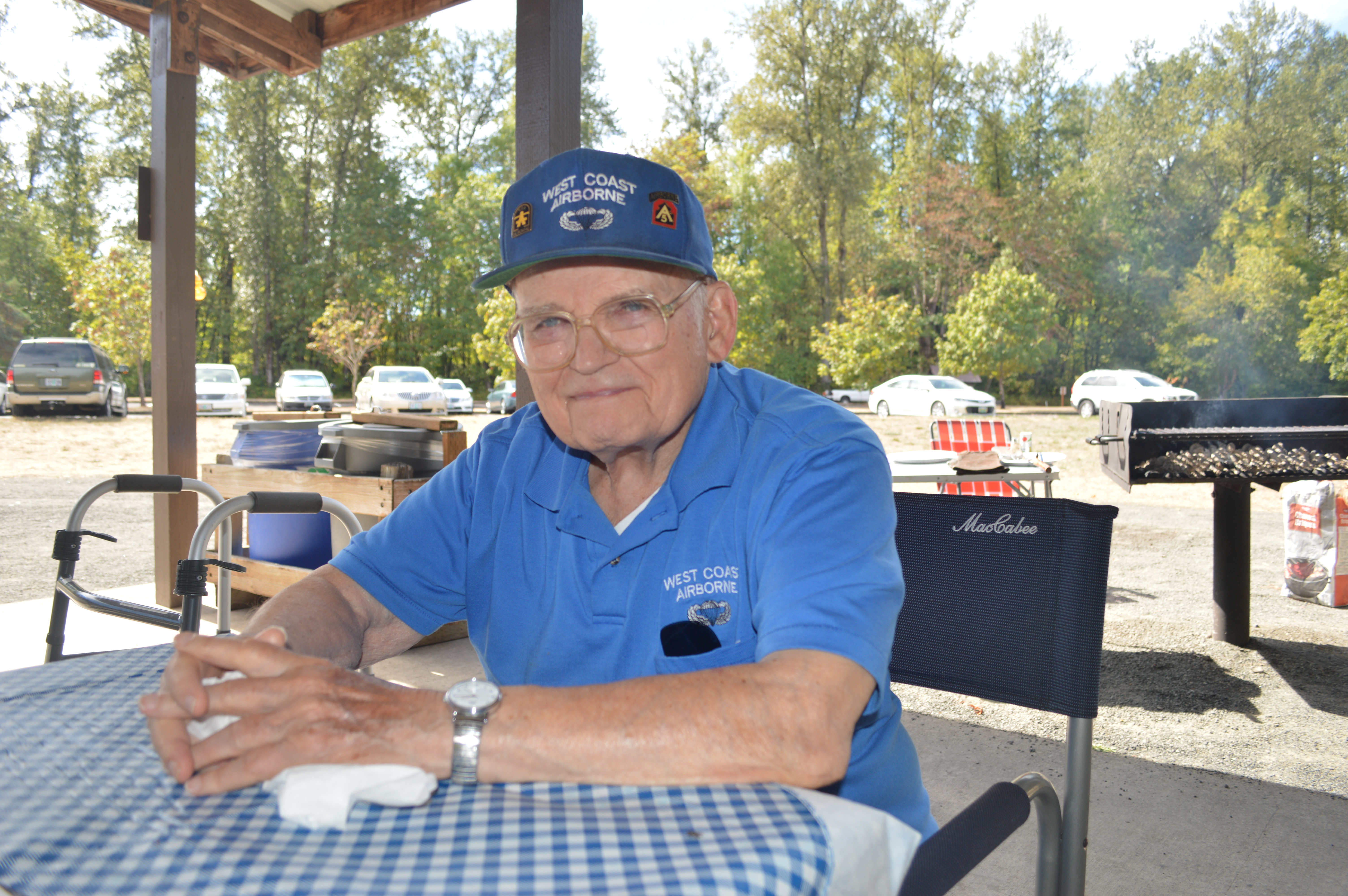 93-year-old Mike Reuter, a retired Lt. Col with the U.S. Army, attended the MOAA picnic for the camaraderie of his fellow officers. In February, Reuter received the Knight of the Legion of Honor, the highest award for soldiers serving in France in World War II. Photo by Vanessa Salvia.

Simpson points out 93-year-old Lt. Col Retired Mike Reuter, at the picnic with his wife, Beverly, and son, Kevin, and says, “He’s a really interesting person.” Without missing a beat, Reuter replies, “Have you told my wife that?” Everyone at the table laughs, but they know Reuter is just being modest. In February, the French government awarded him the Knight of the Legion of Honor, the highest award for soldiers serving in France in World War II. He’s also received the Purple Heart and other military honors.

“I’m here for the association of people you have things in common with,” he says.

Reuter speaks quietly, but has many memories he is willing to share. He joined the Army at the age of 20 and in 1944 was sent to Italy as a replacement. He fought and was wounded at Anzio beachhead. He was rifle platoon leader in B company of the 509 Parachute Infantry Battalion, and parachuted into southern France near Saint Tropez. “My battalion liberated the cities of the French Riviera—Cannes, Nice, Antibes,” he says. “We fought in the Battle of the Bulge against the Germans. After that there were so few left of our platoon that they disbanded us and we were sent to the 82nd Airborne Division.” There were 12 men out of 150 left. In September, Reuter traveled to his hometown of Tacoma, Washington, for a reunion of members of his parachute battalion. There were only three men left.

Organizations like MOAA help to keep men like this together, allow them a place to remember their experiences with others who had similar ones, and share their stories so they aren’t lost. “There’s a lot of history here,” says Simpson. 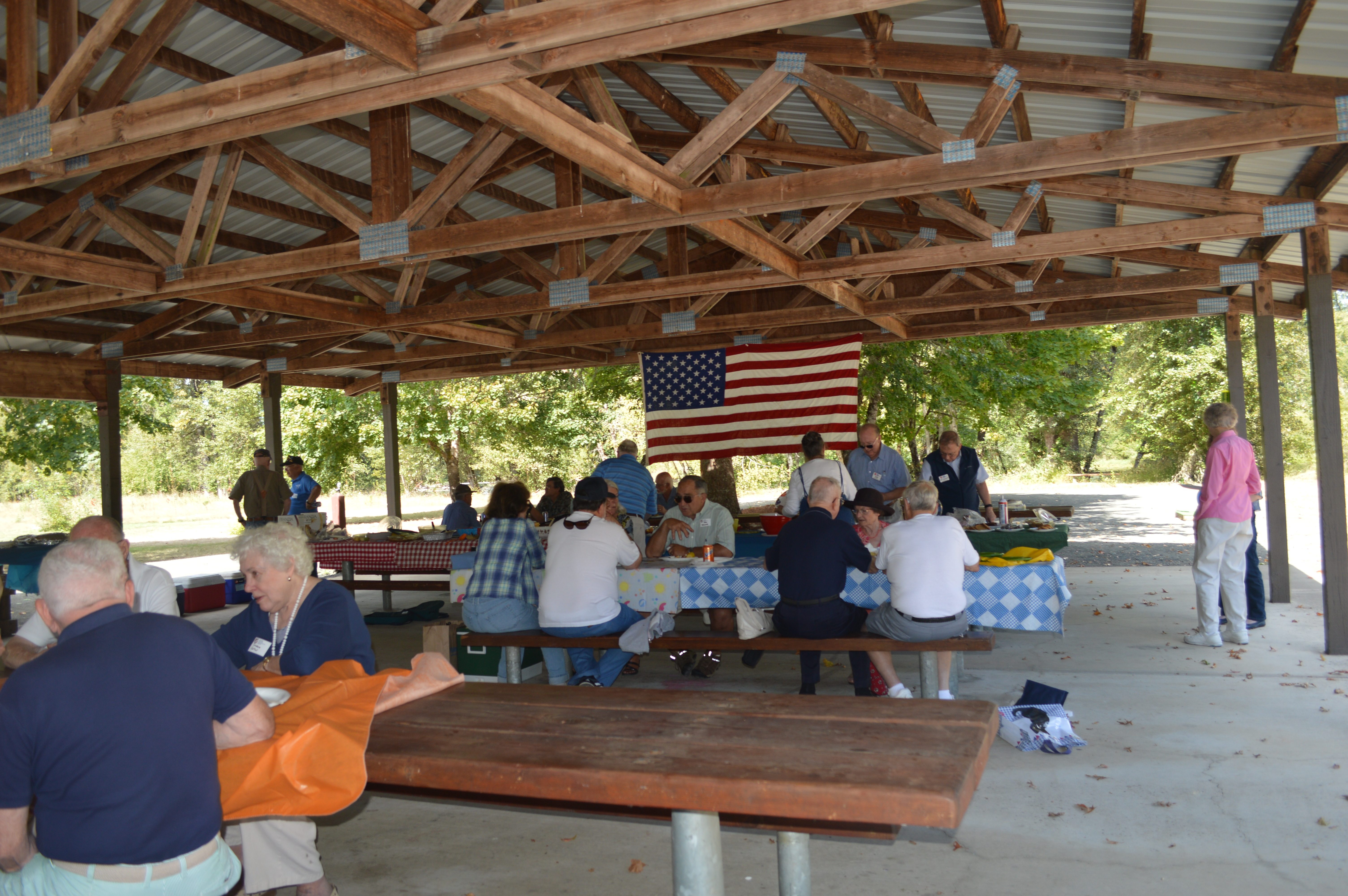 The Eugene chapter of the Military Officers Association of America holds monthly lunches (not July and August), and in September they hold a picnic at Jasper Park in Pleasant Hill for members and their families. Photo by Vanessa Salvia.