By Vanessa on January 12, 2016 in Boomer and Senior News, Health and Wellness, Seniors

Published in the November 2015 issue of Northwest Boomer and Senior News. 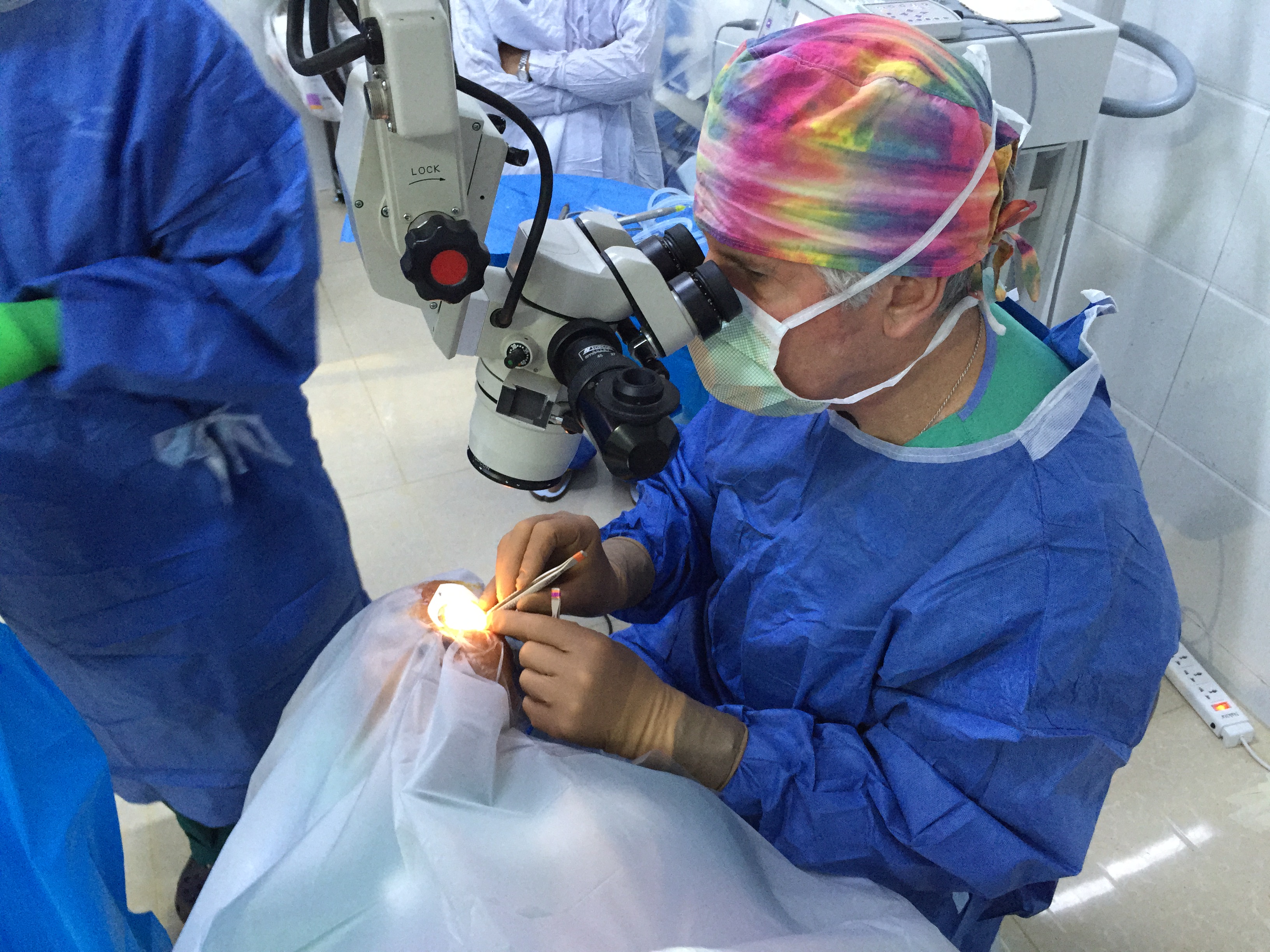 Dr. John Haines, a Eugene ophthalmologist at Oregon Eye Center, was motivated to enter the medical field because he wanted to make a real difference in the world. In his Eugene eye care practice he sees a lot of people of “boomer and senior” age and relates well to them because he is one himself. He has traveled around the world providing sight-saving surgeries and offers the latest eye surgery treatments right here in Eugene.

Haines, now 64, was born in Malaysia, where his parents were both Methodist missionaries. He lived in Malaysia for 10 years, long enough for it to make a big impression on him. “I grew up in the third world,” he says. “I saw that there was a desperate need for health care. I dedicated myself to medicine and I wanted to go into a field where I could really make an impact.”

Haines felt there were two areas where real contributions to people’s health could be made. The first was using plastic surgery training to treat cleft lip and cleft palate. The other was blindness. “I had read that the World Health Organization said there were 50 million people worldwide that were blind,” he recalls, “90 percent of which would go to their graves blind. And, that we have a means by which we could address that, we have the resources, we have the personnel, and yet it wasn’t being attended to. That’s when I chose ophthalmology.”

That, and his realization while looking under the slit lamp—an instrument that focuses a thin beam of light into the eye for examinations—that eyes were really cool. “When I was a medical student I did a rotation in ophthalmology and when I looked through the slit lamp the first time, before I could even restrain myself, it just uttered out of my mouth, ‘Oh, Wow,’ as I looked at an eye close up,” he says. “I knew I’d found my field.” 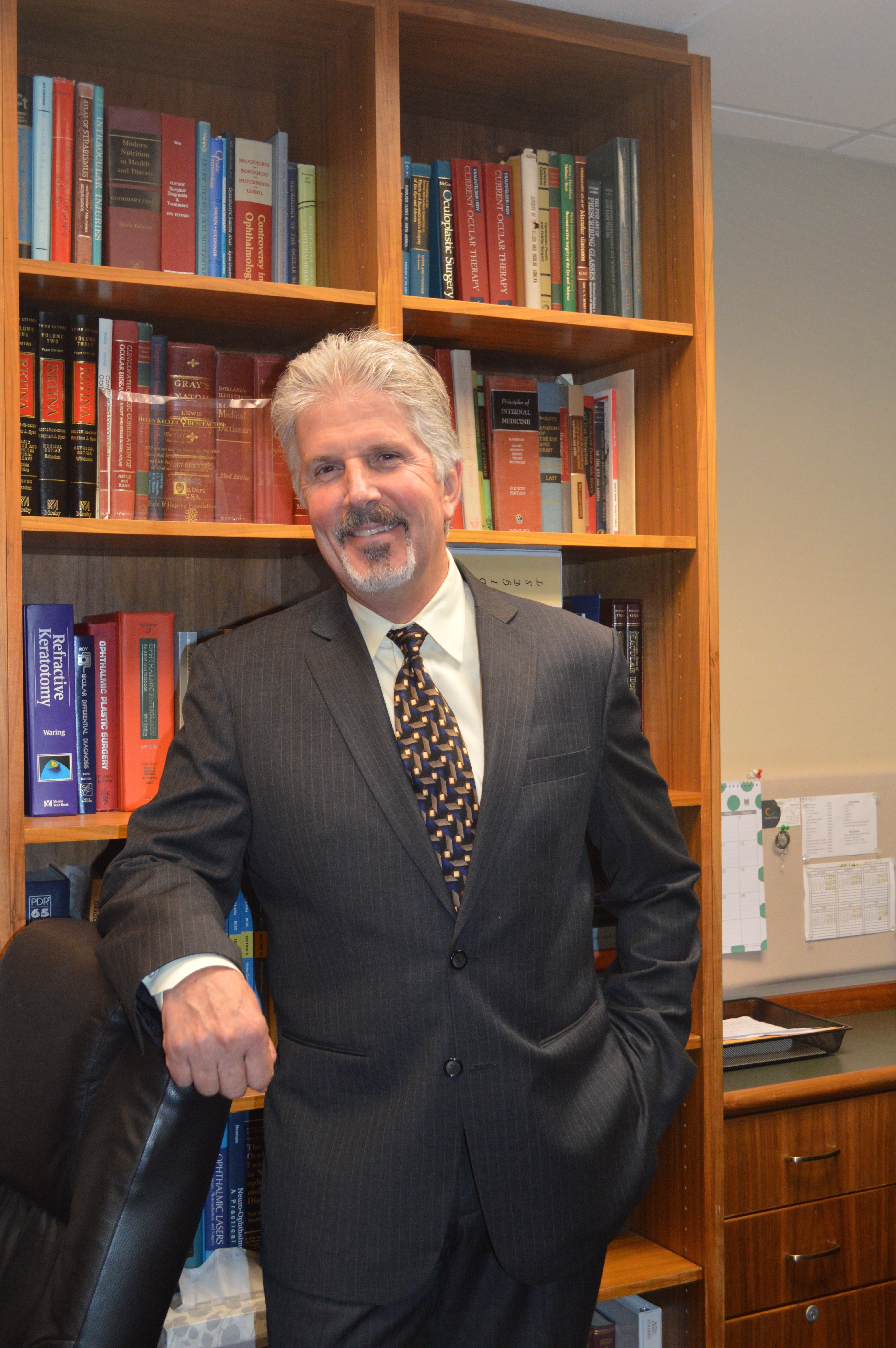 Haines, a tall, lean man with striking salt-and-pepper hair and neatly trimmed beard and mustache, dresses nicely in a suit and tie to see his patients. His demeanor is laid-back and cool, soft-spoken and friendly yet professional. He did not start out his career as an ophthalmologist. Rather, he graduated from Emory University in Atlanta, Georgia, and practiced as a physician’s assistant for 4 1/2 years. “I felt that I was capable of doing more and I wanted to go back to medical school,” he says.

Haines began his ophthalmology residency in 1987 and moved to Eugene in 1991. “I’ve lived in the four corners of the world and traveled there and Eugene is the coolest place on the planet to live,” Haines says. “I’ve been here 24 years and I’ve never lived any place more than 4 years prior to coming here. This is a really, really kind community and I haven’t seen that any other place in the world.”

Even Thailand, known as ‘the land of smiles,’ is not as friendly as Eugene. “You really don’t know what people are thinking behind that smile,” he says, “and here you do.”

His first trip abroad to perform eye surgeries was his first year in Eugene. He’s taken about 30 medical trips since then, to South America, Eastern Europe, Africa and parts of Asia. Over the last 15 years, he’s concentrated his efforts in Thailand and their neighbors, primarily, he says, because of all of the corruption that he experienced in those other countries. In Eastern Europe the party officials were pushed to the front of the line and the poor were not being served, he says. In South America, the leaders wanted their medical equipment but would send them on “wild goose chases into the boonies.” Haines and his team were there to provide eye surgery to restore vision, but the people they ended up seeing there primarily just needed eye glasses. In Kenya, though Haines and his team was there doing surgeries pro bono, large sums of money were changing hands based on the number of surgeries they were performing. “I got really sick of that so we decided to do everything on our own,” he says.

While living in Malaysia, Haines’ father was involved in disaster relief. “Every eleven days he had a disaster some place, war, famine, natural disasters, and then he would assemble a team and do mop-up,” says Haines. Though his parents’ work was based on religion, Haines wanted his own efforts to be more humanistic, and not “church work,” per se. “I wanted it to be my own effort to make the world a better place,” he says. Haines’ efforts are strictly out of goodwill, not out of wanting the people he helps to make any sort of religious conversion. Not that he considers that a bad thing, he notes, it just wasn’t the right approach for him.

About four years ago, Haines and his wife, Joy, initiated a foundation they call Give Me Sight. The foundation was started in part because he had patients coming in to see him with checks that they wanted to donate to the cause, and the foundation allowed Haines to accept the donations and put them to use. This foundation also combines the threads of two of the things that have given Haines pleasure throughout his life—helping people and music.

In addition to being an eye doctor, Haines is a musician who plays guitar, mandolin and dobro. He is a fan of the “soft rock” music of the 1960s and ‘70s, bands like the Beatles, Neil Young and Van Morrison. “I’ve always had a passion for music, always, “ he says, “and I’ve seen many, many, many, many concerts. I’ve played around with a guitar a little bit ever since I was about 14.” His band, Caravan, plays primarily Van Morrison covers. It was when Caravan was playing a benefit concert for the foundation that its name, Give Me Sight, was christened.

Originally, Haines had thought to combine the first letters of three important global health care initiatives into a foundation honoring his family name. He points out that infant nutrition is key to making lasting health care changes because infants who are malnourished will be mentally and physically impaired for the rest of their lives. In order to initiate lasting change and not just a swath of change, Haines says, people also need health assistance and educational services to empower them to take care of their own health. Combine those things: Health Assistance, Infant Nutrition and Educational Services, and you get HAINES. That didn’t sit right with the humble Haines, however. “I thought, it’s too much of an ego thing, I can’t do that,” he says.

About that same time, a roster of bands, along with Haines’ band Caravan, was performing a benefit concert for the foundation. Haines wanted one of the bands to play the George Harrison song “Give Me Love.” The song was played so phenomenally well, Haines recalls, that afterwards Joy came up and suggested they call the foundation Give Me Sight. “That’s how Give Me Sight was born,” he says.

His next trip to Myanmar and Thailand is scheduled for two weeks in February 2016. While there, he will operate on about 300 people and will also be filming the experience for a documentary. The foundation recently donated $5,000 in seed money, which Bangkok General Hospital turned into $1 million dollars for an eye hospital to be built in Myanmar. The foundation purchased a $20,000 autoclave so doctors there can sterilize their instruments. “It’s taken a mom-and-pop cataract camp to the next level,” he says.

Cataracts are a cloudy layer that develops on an eye’s lens, often as a side effect of aging. Cataracts are more common in sunny areas, which is why tropical countries have a much higher incidence of the condition. Cataract surgery has greatly improved over the past few decades. Right here in Eugene, Haines can provide the latest eye surgery techniques, including iLASIK, which is laser surgery that reshapes the cornea to correct problematic vision, and a new technique called femtosecond laser assisted cataract surgery he plans to begin offering by the end of the year.

The cataract surgery is a new, advanced technique using lasers to replace the cloudy lens with a new lens to restore vision. In decades past, the cataract was removed and patients would wear large, dark glasses afterward. “In a normal cataract surgery a slight incision will be made on your eye so the doctor can stick a little metal rod through that can scrape away the lens that has become cloudy,” says marketing coordinator Matt Classen. “Once the lens is scraped away it is sucked out with a very small, precise vacuum, and once it is cleared out the doctor will fit in a new lens.” However, in this method the lens may not stay in place. It can fit asymmetrically or it might even become dislocated. Glasses may be needed following the surgery, because the lens placement can be less than 100 percent precise.

With the laser technique that Dr. Haines will soon be offering, laser pulses lasting only a femtosecond, or 10 to the minus 15 seconds, do the work of breaking up the cloudy lens, so there’s no need to scrape. “The laser can fit the lens much more precisely,” says Classen. “It’s almost like a tailored fit. It’s a far less invasive and much more precise surgery.”

Eye surgery is a life changing process. It’s a quick, easy, safe, outpatient procedure, whether the patient is right here in Eugene or on the other side of the globe in Thailand or Myanmar. “You can do a cataract operation in 15 minutes and do 200 cases in three days,” he says. “You just can’t imagine what it’s like when their patches are taken off the next day and they have the realization that they can see their loved ones’ faces. When you know that you played a part in that, it sends shivers down your spine, it brings tears to your eyes. It’s totally addicting and you go back year after year because it feels so good. It’s about, how can this person’s life be improved? Vision is a big commodity . . . about 1/3 of the brain is devoted to vision so it’s high up there in the hierarchy of how we’re put together.” 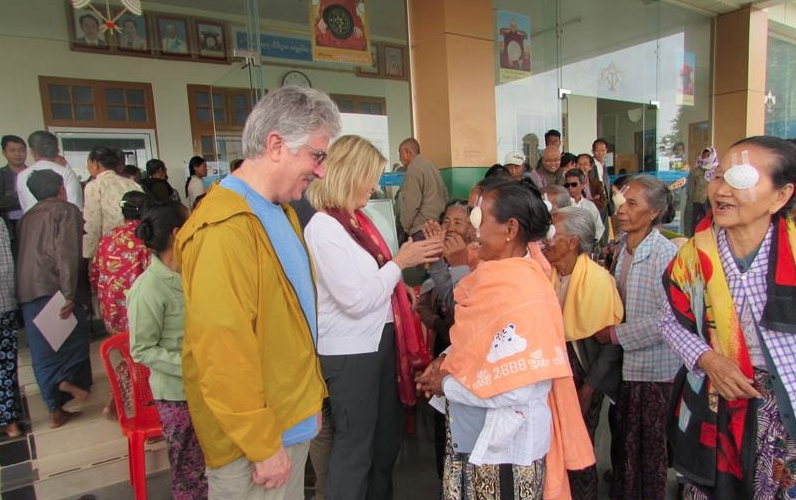 Give Me Sight Foundation
www.givemesight.org

The Meat is on at Barbecue Hut, Specialty Market in Oakridge
Military Officers of America’s Eugene Chapter