By Vanessa on January 12, 2016 in Food, Register-Guard, Restaurants

Published in the November 2015 issue of Tastings, a special publication about food and dining from the Register-Guard. 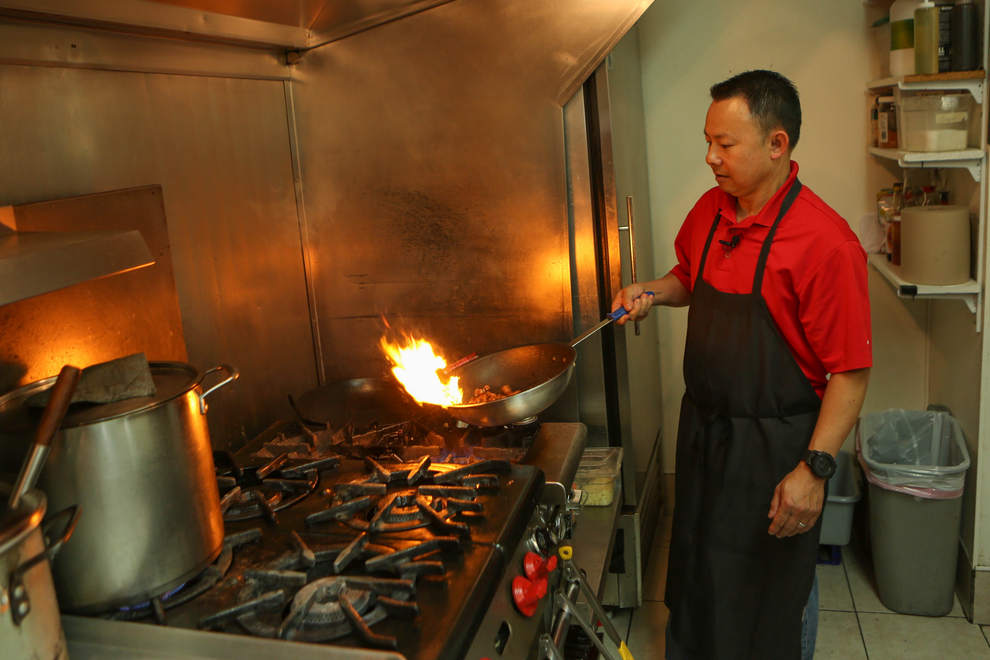 Horn Sov, owner of Angkor Cambodian Cafe in Eugene. Photo by Collin Andrew for the Register-Guard.

While the number of Chinese, Korean, Vietnamese and Japanese restaurants in Eugene has soared recently, another less-familiar Asian cuisine is quietly trying to establish itself. Horn Sov, 50, opened Angkor Cambodian Café in January of 2014 offering some of Cambodia’s traditional dishes.

Angkor Cambodian Café appears to be the only Cambodian-focused dining establishment in Lane County.

“That’s why I opened this place,” Sov says. “If you want Cambodian food this is the only place. We serve a small menu of traditional Cambodian meals, the kind of food I cook at home.”

Twenty years ago, Sov intended to move from Los Angeles to Seattle. Instead, he purchased Cal’s Donuts and Pastries in Santa Clara and still owns that business along with Alvadore RV & Boat Storage.

Prior to opening Angkor, Sov and his wife, Leap, also owned the Pantry and Pub, a restaurant in the same location. “I wasn’t running it myself and it struggled to the end,” Sov says. “My wife and I talked about someday, when we’re old and retired, wanting to open a little Cambodian restaurant, so it just came sooner than we planned.”

Geographically, Cambodia is situated between Thailand to the northwest and Vietnam to the southeast. Like the cuisines from those neighboring countries, traditional Cambodian food is characterized by crisp, fresh vegetables and layers of flavor imparted by lemongrass, lime leaf, turmeric, galangal and ginger blended into brothy soups, noodles and rice dishes.

“The food is like a cross between those two countries,” Sov says. “There is a lot of crossover.” 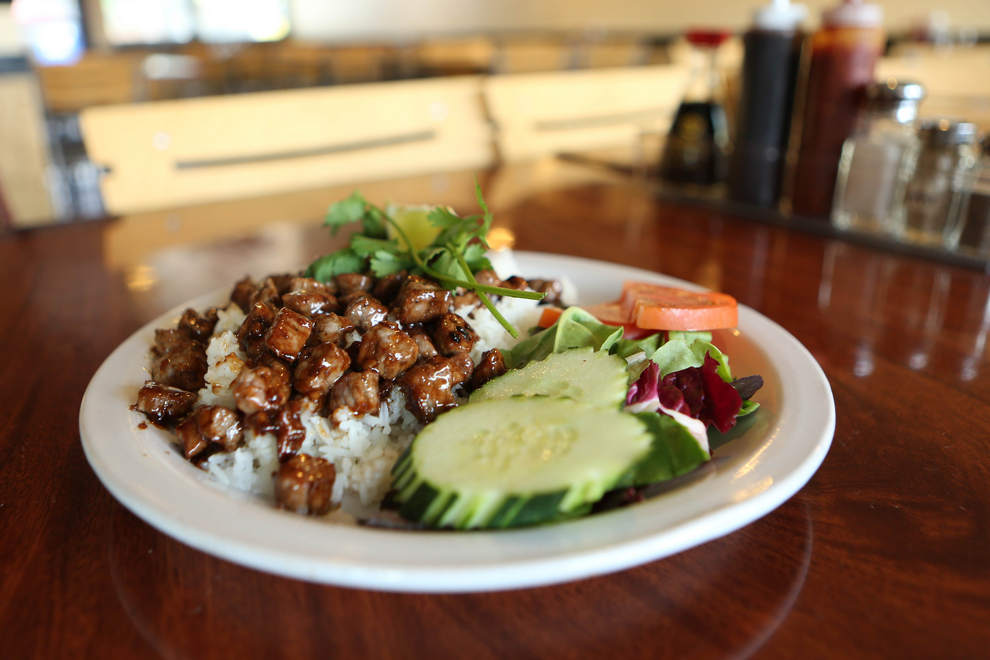 While there are more similarities than differences, Sov says Cambodian food is, in general, not as sweet or as spicy as Vietnamese or Thai.

Sov serves three kinds of rice noodles — flat and thin, round, and tapered noodles known as ‘loat.’ The loat noodles are roughly the size and shape of mung bean sprouts and are unlikely to be found on any other Asian menu.

The dish known as Loat Cha (cha means stir fry) is served with a blend of egg, bean sprouts, green onion and a house-made fish sauce; adding chicken is optional.

In addition to a small selection of local beer and wine, Angkor offers bubble tea and house-made desserts, such as mung bean rice dumplings, that change weekly.

Most of the stock used in his dishes is either chicken- or pork-based, but Sov makes a rich mushroom broth for vegetarians. The menu has a couple of curry dishes, which are ubiquitous in Asian cuisine, but Sov says the Cambodian style is different in that it is much lighter on the curry flavor than American diners may expect from other Asian fare.

“I don’t use a lot of curry powder,” he explains. “I don’t want to overpower it.”

To prepare the curry noodle with chicken — served with bamboo shoots, sweet potato, onion, cucumber, cabbage and bean sprouts — Sov stews the chicken in the sauce overnight to impart as much flavor as possible.

True to the name

Since opening last year, Sov says the response to Angkor Cambodian Café has been good. But because he also has two other businesses to run, he’s letting the restaurant’s clientele grow naturally, without a lot of advertising.

He’s also been pleasantly surprised by the number of locals who have come in to eat and told him they’ve traveled to the restaurant’s namesake, Angkor Wat, a 12th-century temple complex in Cambodia that is the largest religious monument in the world. The Cambodian money that Sov displays on the restaurant’s walls was brought in by diners who have been there.

“A lot of Americans go to visit Angkor; surprisingly many more Americans go to Angkor than I expected,” Sov says. “And when they go there they’ll taste this kind of food. It’s a popular tourist destination nowadays like Mayan temples and the pyramids. If you have a chance you should see it at least once in your life — it’s a beautiful monument.”

While many people who get the chance to travel to Angkor Wat probably will do it only once, Sov hopes that locals will eat and enjoy Cambodian food many more times than that. 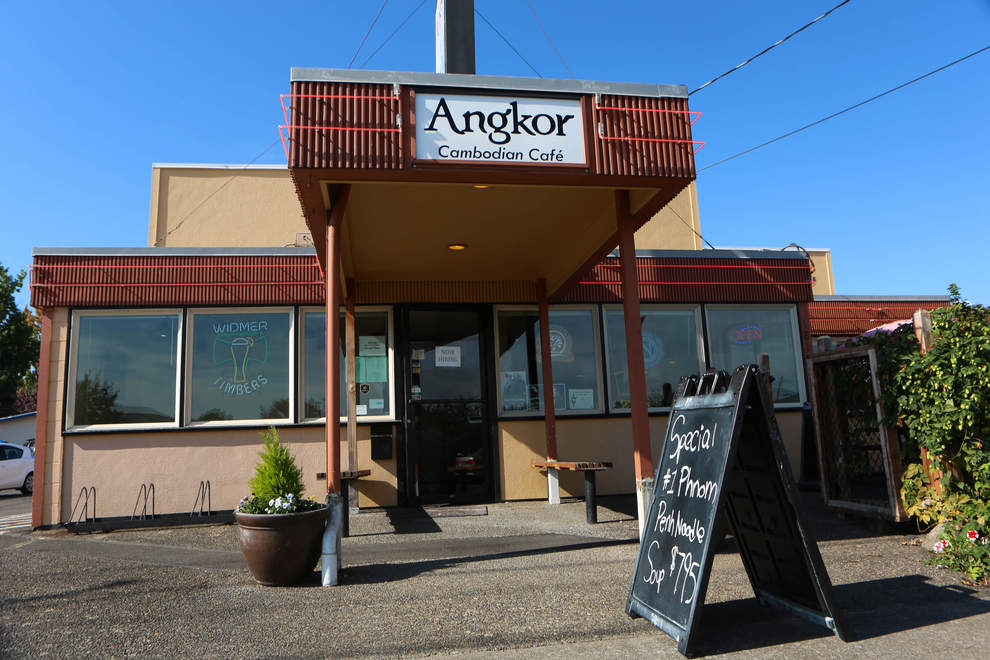