Wooden Christmas tree candleholders have graced Trudi and Dan Diffendaffers’ living room mantel every year since the 1980s, making them one of the household’s newer holiday decorating traditions.

Christmas comes but once a year, but for Trudi Diffendaffer, the joy lasts a lifetime.
Come November, Diffendaffer’s large collection of vintage ornaments, including many Scandinavian items and some from the Victorian era, take their places of honor throughout her south Eugene home. They’re not just beautiful; each piece holds a cherished memory. Many of her ornaments decorated the homes of her parents and grandparents, or were given as gifts by her sister or dear friends.

Diffendaffer’s decorating style is influenced by her memories of Christmas as a child. Now 65 and married to a retired forester, Dan, Trudi recalls Christmases at her grandparents’ home — the large dining table laden with food, stockings over the fireplace in the 40-foot by 19-foot living room.
“They always had a great big tree set in a tin wash pan full of water, and big glass ornaments,” she recalls.

Later, her parents’ mid-century ranch home seemed like Christmas all year. “The house lent itself well to Christmas,” she says. “It had wood ceilings with big wooden beams, knotty pine wainscoting, and for years it had dark green wallpaper. It looked like Christmas much of the year.”

Trudi’s parents were avid skiers and would bring back German ornaments from Sun Valley each year. In 1967 she received her first ornaments, passed down to her by her mother, and got her Christmas collection rolling. 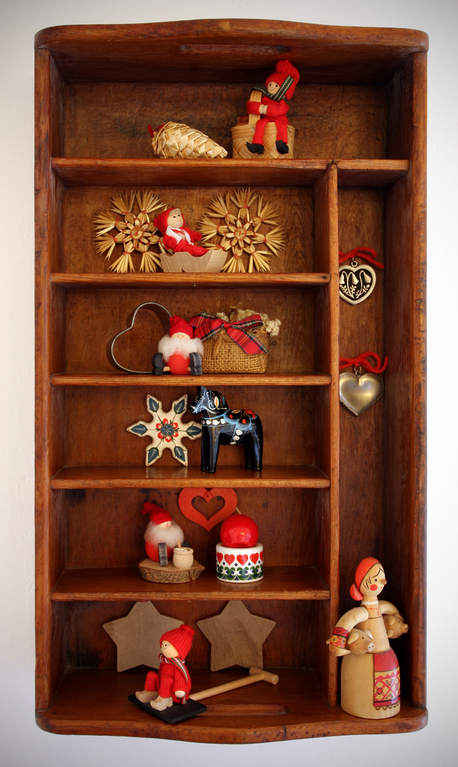 Christmas collectibles have strong sentimental appeal for Diffendaffer. “I know where they all came from, who gave them to me or who made them, so they all remind me of something,” she says.

Bringing out the memories

The wooden candleholders that grace the Diffendaffers’ living room mantel have been brought out each year since the 1980s. Cherished Victorian beaded ornaments were other gifts from Trudi’s mother.
In the ’60s while skiing in Austria, Trudi’s parents met an Austrian couple that they remain close to — each year the children of the couple give Trudi a hand-carved wooden figure to go along with a clay crèche that is displayed on a sideboard near her dining area.

Little German mercury glass reindeer on the dining table belonged to Trudi’s grandmother. “Those I love,” Trudi says. “She would put these out every year.” Most of Trudi’s ornaments are Scandinavian. Until the mid-1800s, most Christmas ornaments were natural objects or edibles such as fruits and nuts. After Germany became a glassworking center, hand-blown and hand-painted glass ornaments were more common, and now are highly sought after.

For Trudi, the monetary aspect hardly matters. “I just feel so sentimental about these things,” she says. “And I like that each one is individual and different. I know where they all came from, who gave them to me or who made them, so they all remind me of something.”

One her son brought back from a trip to Finland that he took with his grandmother when he was 15 years old. One, a bright blue metal ball, was in Dan’s family — it’s the only ornament she has from his side. Trudi’s decorating style is subtle, yet encompassing.
Seasonal touches tuck into unexpected places throughout the home, such as framed magazine covers of winter scenes on the living room wall, and felt elves gripping the light fixtures over the breakfast nook.

One cherished ornament is a clear glass ball with a paper cap, made during wartime when metal was in short supply. There’s nothing fancy about it, and yet plain glass has a way of reflecting light, brightening the corners and warming the heart better than a blinking bulb. 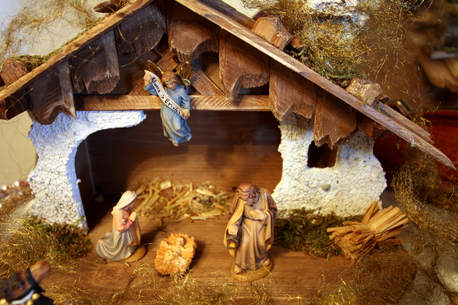 Trudi Diffendaffer spends at least a full day lovingly placing her Christmas collection throughout the home; her husband, Dan, jokes that she kisses each item as she takes it out of the box.

It takes Trudi a full day — at least — to unpack and place her Christmas collection. “My husband says I kiss each thing as I take it out of the box . . . but I don’t think I’m that bad,” she laughs.
Many of her decorative items are repurposed and used year-round. A wooden silverware tray, given to her by her mother when she and Dan were first engaged, hangs on her kitchen wall, filled with (and surrounded by) ornaments that were gifts from her sister. An antique metal bread pan holds a similar display.

“Think of nontraditional ways of using things,” Trudi suggests. “If you have a crock of some sort use it for flowers, while at another time you stick kitchen tools in it and at Christmas put greenery in it.”

If you’re just getting started on your collecting, haunt antique stores or eBay for unique items that can be grouped together and used seasonally in various ways. “Like boxes,” Trudi says. “You can stack them up and they become platforms for placing other things on.”

Trudi favors a “tossed together” look, nothing too studied, but sometimes that look is harder to achieve than the finished result might imply. Groupings in odd numbers are pleasing to the eye, and things such as pillows with covers that can be changed out seasonally, and candle holders in different styles but similar materials, such as wood or glass, make pleasing arrangements.

“I get bored so I look forward to changing things when the seasons change,” she says, “but it means reusing in different ways the things that I already have.”

And, as Trudi’s forester husband would be keen to remind her, natural objects such as cones and seedpods are never out of place, whether your collection is passed down or present-day.

Writer Vanessa Salvia can be contacted at sp.feedback@registerguard.com.