Published in the September 2013 Register-Guard publication Home and Garden. 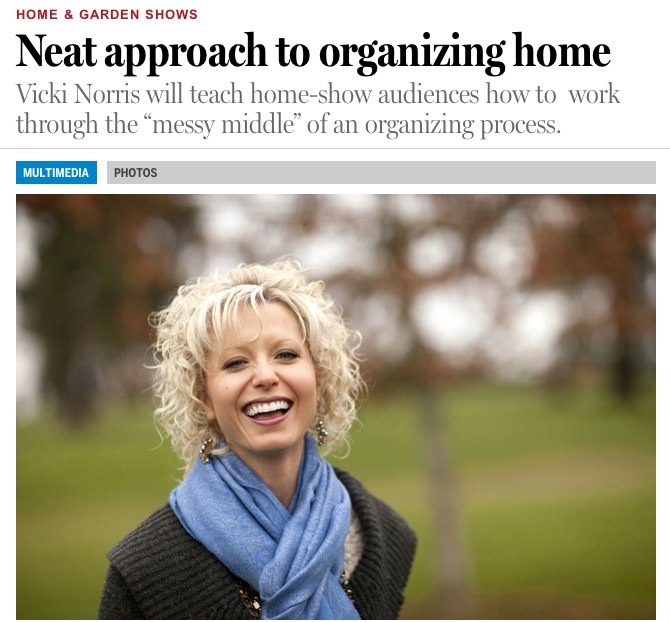 Learning How to Get Neat and Stay Neat

Vicki Norris teaches audiences how to work through the “messy middle” of an organizing process.

Vicki Norris, owner of professional organizing company Restoring Order, has a shock of blond curly hair and a laugh that can’t be ignored. She may be small in stature, but her ideas are powerful. Norris’s appearance at the 2010 Lane County Home Improvement Show was met with such enthusiasm that she’s been invited to give three keynote speeches at the fall show.

“When I did the show in 2010 we had standing room only in the workshops,” says Norris. “ It’s a topic that people need. Getting your life organized is the number one consumer topic, I think!” And then she breaks into a big rolling laugh.

Norris says that her talks go beyond simply inspiring people to make donations of unneeded items to charitable organizations—something she hopes people will do. “In my talks I really love to give people lots of information so be prepared that the talks will be more than an hour,” she says. “I like to leave people with their head spinning!”

Norris’s three talks will include new information that audiences did not hear in 2010. Since that appearance she has developed a do-it-yourself DVD series on getting organized. “Not everyone can do the hands-on help but a lot of people need help with paper so we now have a whole DVD series just on paper management and how to get your paper organized,” she says. “It’s such a number one thing that people struggle with.”

Restoring Order has been in business since 1999. Norris is a business owner, a wife and mother of two boys aged 5 and 6 1/2. She also homeschools her boys, so she knows that a home needs to multifunction and meet the needs of everyone living in it. “I think that being organized is intrinsically connected to your quality of life,” she says. “Also, we don’t live this perfect Martha Stewart life. Being organized doesn’t mean that you live in a magazine. That scares people and it doesn’t seem approachable to people.” At Restoring Order, Norris and her staff prefer to live an “ordered” life versus an “organized life. “Living an ordered life is living life on purpose, putting first things first,” she explains. “Think how your life feels when you can find things and you’re not embarrassed to open your garage doors so your neighbors can see . . . then you can live in peace. When you order your life you regain peace and that’s priceless.”

Norris’s Friday evening talk is entitled Secrets to Ordering Your Life. “It’s about getting your whole life organized,” she says. The talk encompasses the true costs of being disorganized and moving toward authentic organizing rather than “tips and tricks” organizing.

The first Saturday talk, at 11 a.m., is entitled Slim Down Your Stuff. ” She says she will talk about “diagnosing your disorder,” how to create order and implementing lasting change. “We’ll look at, how did you get here and what is your particular brand of disorganization. Then I’ll go through six common causes of organizational mistakes so we can avoid those things as we go on our organizational journey.”

One example that Norris gives is that people keep buying plastic organizing containers and don’t understand why it’s not working. She calls this the “product panacea.”

Her third talk, on Saturday at 3 p.m., is specifically geared toward paper management. “In The 5 Ps of Paper Management, we’ll look at five key systems that everybody needs to manage their paper,” Norris says. “Everybody thinks, ‘don’t pile just file,’ but that’s not very helpful because you don’t just need a filing system. You need a whole set of systems to successfully manage paper.”

Norris’s book, Reclaim Your Life and Get Organized for Good, was published in 2006. She will have a book signing after each talk.

A key feature of Norris’s organizational approach is that people need to figure out the root cause of their disorganizational habits. When she’s been featured on HGTV, she says viewers want the “before and after” and the “big reveal” at the end. “I focus on the messy middle, because that is where the sustainable change happens,” she says. “What happens in the middle is about figuring out, how in the world did we get here and what’s the root cause, because if you don’t heal this, you’re going to be back in the same boat.”