By Vanessa on March 4, 2015 in Eugene Weekly: Chow, Food, Restaurants

Published in Eugene Weekly’s January 2015 Chow special section devoted to food and dining. This was one of two restaurant profiles I had in that issue.

A new restaurant has opened in downtown Eugene, nestled near the domineering Capstone buildings — Makoto, Japanese for “truth” or “honesty,” isn’t located far from a handful of other sushi and Japanese restaurants in the area. But Makoto plans to do things differently.

Watching Chef Yun Song at work behind the sushi bar at Makoto is like watching a master painter’s brushstrokes. In making a golden dragon roll, his hands work quickly but carefully, slicing avocado thin enough to gild the dragon’s “head.” He places spoonsful of smelt roe just so on top, illuminating the dragon’s scales. He thinly slices a carrot, paints the plate with unagi sauce, then pulls the thin tip of the carrot through it to feather the sauce.

When he serves the roll, his head is down and his hands have moved on to the next task, but you can see his eyes just barely looking up at you as you take a bite, a smile playing imperceptibly across his face as you nod your head in approval.

Chef Song was previously sushi chef at Sushi Station, and it’s no surprise that Makoto’s owner, a Korean man named BH Jang, sat in front of Chef Song, also Korean, on his regular visits there. Makoto’s head server, Marla Rogers, also worked with Song at Sushi Station for five years. “BH was a longtime customer of ours,” says Rogers. “He would always come in and sit at the bar in front of Yun. They became good friends.”

Jang worked at Hynix in Eugene before starting his own semiconductor company called Semiconductor Technology America. “He was looking to dive into a new business, and he has the love for sushi and the aesthetic eye,” she says. “Because they’re both Korean, we have a lot of traditionally Korean dishes. We wanted to make the menu as big as possible and offer things that no other restaurants were offering.”

The menu is large and varied, offering plenty of sushi, sashimi, nigiri and gunkan (ingredients wrapped in seaweed in a boat shape). Most of the Korean dishes are based around Korean barbecue, like bibimbap, a bowl of rice topped with a salty, spicy mix of grilled meat and vegetables. Orders can be as affordable as a salmon or yellowtail hand roll for $2.95, or as rich as the seafood kabocha for $21 — a kabocha squash filled with vegetables and seafood.

The 120-seat Makoto first applied for building permits in August and enjoyed its private, soft opening on Jan. 9. The tables and bar are fashioned from salvaged fallen redwood sourced over a five-month period by general contractor Tony Kim, who also made the highly polished black walnut platters upon which rest Makoto’s sashimi platters. A huge chunk of salvaged maple holds wine bottles.

Yun has been a sushi chef for 15 years. He’s originally from a South Korean town called Muju and has lived in Eugene for eight years. Kim, who enjoys Yun’s food, says he has “very nice skills, very good decorative skills, and they get the best ingredients they can get.”

Rogers says all Northwest restaurants use the same seafood suppliers, but what makes the difference is “how you store it, how often you order and how you cut it.” In other words, the skill of the chef. And Chef Yun has what it takes. 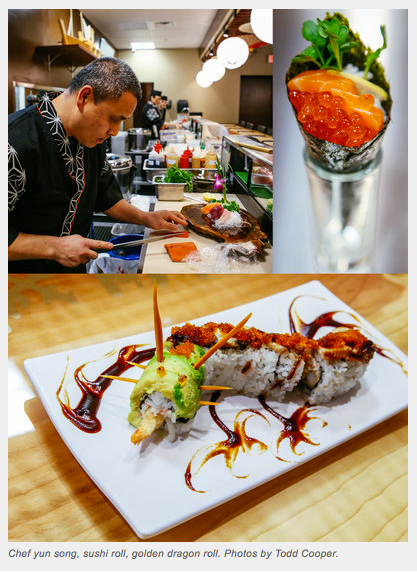