By Vanessa on March 4, 2015 in Food, Register-Guard, Restaurants

Written for the Register-Guard’s February issue of Tastings, a quarterly guide to local food and dining. 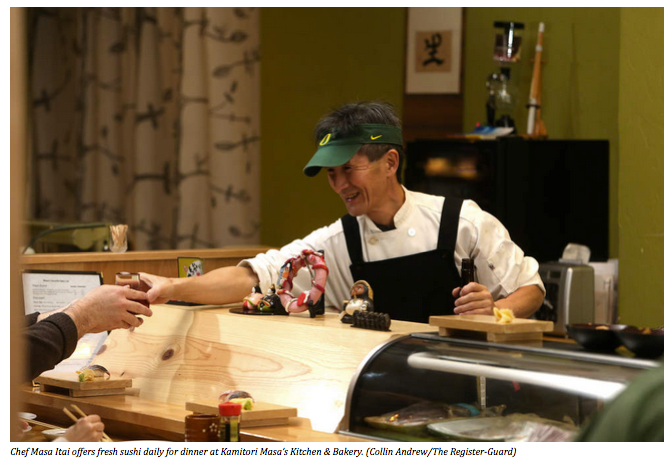 The food at Kamitori, a Japanese restaurant open in Eugene since February 2011, has changed, and then recently changed again. After a health issue forced chef Masa Itai to work less with his hands for a time, his focus once again is on traditional nigiri sushi.

Kamitori, tucked away near the downtown bus station, is something of a hidden gem among Eugene’s many sushi restaurants. Unlike the “dragon rolls” and rolls topped with mango and macadamia nuts, for instance, Itai’s sushi is nigiri — a style in which the chef presses a mound of vinegared rice by hand into the correct shape, then drapes fresh, mostly raw, seafood over it.

“To me sushi is nigiri sushi and maybe some basic roe,” Itai says. “That’s what my sushi is. Very classic, very traditional. I don’t like making fusion-style sushi because I like to stay in the very authentic way of making sushi. You enjoy the harmonizing of fish and rice, so the fish must be very fresh.”

Sushi journey back on course

Born Masahiko Itai in Kumamoto, Japan, a town that gave its name to the famed tiny oysters that grow there, the young Itai dreamed of traveling. An older friend told him that with sushi training he could get a job anywhere. Now 56, Itai made sushi first in New York, then Paris and Geneva, then Boston, New York again, Philadelphia, then Hawaii. He and his family have lived in Eugene for five years.

“Because I started young and learned nothing but classic-style sushi I am stubborn to stay in that style,” Itai says. “I have some rolls, the avocado, spicy tuna roll. Those are too popular to ignore, but I would rather stay classic style.”

Last June, though, Itai was forced to stop making sushi because of an inflamed tendon in his hand, which first began bothering him three years ago. “I went back to Japan to get surgery but it doesn’t help,” he says, “so I stopped making sushi.”

Itai’s doctors all told him his problem was overuse. “They were right,” he says. “After I stopped making sushi my hand got much better.” Chef Itai is training his son, Akira, 16, in the fine art of sushi, but even though he is in pain, Itai doesn’t want anyone else making the sushi in his restaurant.

To compensate, Itai began calling the restaurant Masa’s Kitchen & Bakery, offering Japanese breakfasts and Western-style breakfasts as they are served in Japan, including items such as French toast or baked goods with Japanese flavors. Instead of serving dinner, Itai woke in the wee hours each day to bake his special bread made with nothing but eggs, milk, butter and yeast for toast, and the dough for his baked goods, called pan.

“The breakfast wasn’t successful though,” Itai says. “Even though there are a bunch of sushi restaurants newly opened, people still want my sushi, that classic, authentic sushi. So I restarted slowly. Now daily I make sushi, but very limited quantities because I try not to force my hand to overwork again.”

In September, on Tuesday nights, Itai began offering special reservation-only sushi dinners limited to eight or nine guests. He offers a seasonal menu of three to four appetizers, 12 to 15 pieces of nigiri, dessert and soup. Itai’s seafood deliveries arrive on Tuesday, so that’s the night his fish is the freshest it can be, and also the most varied, with items coming in from around the world.

As of the first week of January, the chef switched back to offering sushi daily for dinner, although he still has his case of baked goods.

Chef Itai’s preferred fish for nigiri are mackerel, red snapper and rockfish, but his favorite is local sardine, when they are available. Sardine season coincides with the mid-summer albacore season, because albacore chase sardine.

“When we can get fresh sardine, we don’t prepare it, just filet and cut it,” Itai says.

Today’s boats are fitted with technology that enables fish to be flash-frozen immediately after being caught.

“When I use the frozen sardine I marinate with vinegar and that’s good, too,” Itai says. “That’s available almost all year long.”

Pan, saké and more to explore

Itai makes all his own baked good himself. He stuffs the pan with various fillings, such as curry, although he says the most popular flavors are sweet. Green tea and melon filling is classic. Cream pan is filled with a custard cream. Anpan is his most popular flavor, made with sweetened bean paste.

Kamitori also offers a varied selection of Oregon and Japanese saké. Masa’s favorite is No. 32, Hideyoshi Amakarapin Junmai, whose name is threefold in meaning: ama is sweet, kara is dry and pin is sharp. “This saké contains those three,” Itai says. “So once you have a sip you taste sweetness on the back of your tongue, you taste dry, then when you swallow you taste sharp.”

Not everyone wants such complexity, Itai allows. In those cases, he has other recommendations: No. 6, a soft and fruity Japanese saké called Cabin In the Snow, and No. 33, Yoshinogawa Gokyo Ginjo, which has a fennel flavor.

Whether they visit Kamitori for sushi, pan or saké, customers who are willing to put their trust in chef Itai never seem to be disappointed.

Hours: 11 a.m. to 3 p.m. Tuesday through Saturday for lunch, and 5 p.m. to 9 p.m. for dinner (sushi and other choices) except on Tuesday night, when limited seats are available by reservation only for a special nigiri sushi dinner featuring that day’s delivery of the freshest-possible fish.
Information: 541-686-3504; sushi@kamitori10.com; kamitori10.com 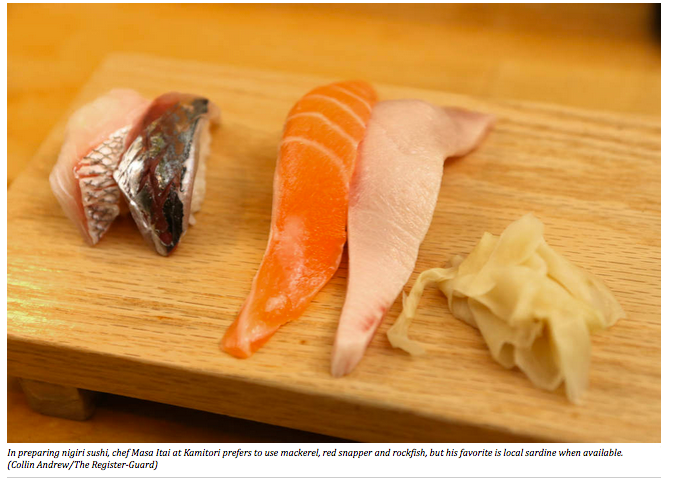 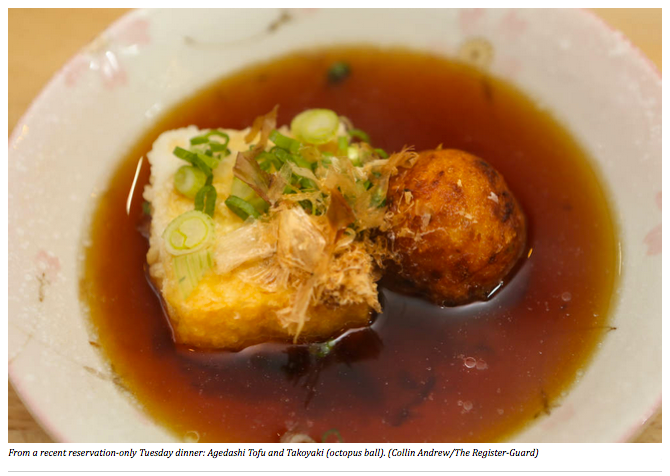