By Vanessa on December 12, 2013 in Holidays, Home, Register-Guard

The Register-Guard asked me to write an article for their December issue about Santa collectibles. With so much out there that is Santa-fied, narrowing down what types of Santas to focus on was the hardest part. I went to three local antique stores and they all had different yet really interesting types of Santa collectibles–from the old cardboard advertising Santas to the Coca-Cola Santas, to really early 20th century postcards with old-fashioned images of Santa. Before he became the jolly round fat man in red he is today, he was often portrayed as a tall, thin man dressed in greens and browns, more like a wood elf. and he wasn’t always nice or smiling. The picture of the postcard below portrays Santa with a bag of toys for the good children and a switch for the bad ones. Santa didn’t start looking friendly until he was used for advertising purposes. Makes sense . . . I suppose anyone would be more likely to buy a Coke from a man with a happy smile who wasn’t threatening you with a stick. This published in December 2013.

In today’s Christmas celebrations, Santa Claus is a jolly, round, white-bearded figure symbolic of joyful giving. But he wasn’t always this friendly. Shelley Maynard, owner of Pewter Rabbit Antiques in Eugene, has a circa 1910 postcard with Saint Nick holding a switch, to whip you if you weren’t good. “That’s where the ‘naughty or nice’ thing comes from,” she says. That troublemaking personality was a hold-over from when he was known as the Dutch “Sinterklaas,” whose helpers reported to him whether or not children behaved properly.

“Santa used to be long, lean, serious,” says Maynard. “He didn’t look happy. Once he became a product for advertising, that’s when he changes. Coca-Cola really jollied him up.” Coca-Cola began using him as an advertising prop in the 1930s, and since then, that portly, rosy-cheeked fellow is what most Santa collectibles portray. Collectors like all different types of Santas, and luckily, there’s enough different styles of Santa to satisfy everyone. “Some people just collect the advertising Santas,” Maynard says. “Some people just want the candy container Santas, or the European Santas, or the Americanized Santas.”

During the 1950s and ’60s, when Santa became rounder and happier, Santa’s colors also became richer—redder reds and brighter whites. That’s what catches Trisha Frazer’s eye. Frazer’s daughter is co-owner of Eugene’s Oak Street Vintage. She’s been in the antique business for years herself. “People like to collect Santas because he represents a charming memory,” she says. “A Santa collector is going to want to have all kinds of Santas.” Oak Street Vintage, which specialized in mid-century modern items, has plastic containers with Santa hoisting an empty pack over his shoulder that would have been filled with candy. Older snow globes were made with a feature that allowed them to be refilled.

Cardboard Santas are more rare than plastic. Frazer recounts that her daughter purchased only one estate in the past year that included Santa collectibles. “They’re often passed down through families,” she explains. Penny Dolan, owner of Eugene’s Oregon Antique Mall, rarely sees paper or cardboard Santas. She says that Coca-Cola items were often limited edition, so they are harder to come by.

If you do find a Santa collectible, Dolan offers some tips on evaluating quality. “If it says “made in China” it’s not old enough!” she laughs. “Made in USA is a good indication that it’s authentic and not a reproduction.” Items that were made in Occupied Japan were made between the years of 1947 and 1952. Items made in Hong Kong are often from the 1960s and ’70s. In addition to paper Santa items such as Coca-Cola advertisements, collectors are always interested in books such as “The Night Before Christmas” and glass ornaments. Dolan has an extensive collection of pre-WW II Czechoslovakian and German ornaments, which are her personal favorites.

Though experience counts in the antique business, Dolan notes that she can tell older items because of the difference in materials. The plastic is sturdier and thicker, for instance. She gauges age by the roundness of the Santas. “Older Santas have a whole different look,” Dolan says.

There are some very expensive Santa collectibles out there, but also some moderately priced treasures. Maynard’s vintage postcards start at only .50 cents, but the older ones featuring European guises of Saint Nick can cost up to $20. On eBay in late November, a “rare”1962 4-foot-tall cardboard Coca-Cola Santa was listing for $795. An “ultra rare” 1950s red Coca-Cola cooler was going for $569. If that’s too rich for a beginner collector, Frazer notes that there are smaller Santa ornaments that can be had for a few dollars. “You can start with that and then work up to the $200 item,” she says.

For collectors, “rarity” is something that’s hard to define. Often, the cost of an item depends simply on how much was paid to acquire it. And the collector never knows what might be out there, or what they will stumble across. “It’s a funny business,” Maynard says. “You just never know what you’re going to find. It’s the frustrating and the fun part of what I do.” 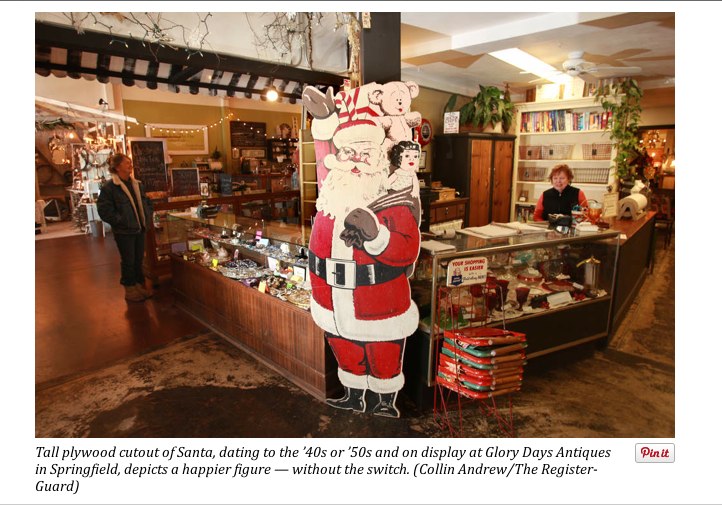