By Vanessa on December 6, 2013 in Art and Artists, Holidays, Register-Guard

Eliel Fionn is a wonderful woman who makes felted wool critters and things from colored wool. She teaches felting techniques and since I knew I was writing an article about her, and because of the fat that I live on a sheep farm, I took her class. Over the two hour period she taught me step by step how to make a penguin. And I must admit, it turned out great! My crafts typically look like the “Nailed It” posts on the Craft Fail and Cake Fail blogs (which is to say, the exact opposite of “nailed it”) but this penguin was amazing. Eliel’s class inspired me to keep trying to make little felted things, though I will never be in her league. If you are in Eugene and happen by the Saturday Market or Holiday Market, stop in and watch Eliel make something. She works fast and if you stand there for about 15 minutes you’ll be able to see something pretty much created from start to finish. This published in December 2013 in Dash. Some people find their creative path in life by accident, while some always seem to know their purpose. Some people need a bit of encouragement to follow their path once they find it. For Eliel Fionn, who combines the craft of dry needle felting with storytelling, it was more of the latter.

“I’ve been writing stories for, gosh, ever!” says Eliel, 52. “I used to work in a preschool and always told stories that I made up to the kids.” One of those kids told Eliel that she should write her stories down. She did, though they ended up stuffed into a closet. Now though, she’s published books of poetry and fiction, and this year released “The Meadow,” a fairy tale illustrated by world-renowned artist Nancy Bright.

And Eliel had never heard of needle felting before moving to Eugene 7 years ago. She grew up in Fairbanks, Alaska, and was living in Monterey, California, with her husband, Mark Donahue, when they relocated to be near his parents. She had a business as an intuitive counselor, which she still does, but that didn’t get her out into the community very much. A chance encounter with the now-shuttered shop Circle of Hands introduced Eliel to felted items. She was hooked, and sells a large portion of her felted creations at Eugene’s Saturday and Holiday Markets.

Eliel began her felting craft by following instructions from a book on felted tapestries—flat art pieces. “But at the end of the book there was one 3-D thing, a gnome, and I made that and it was real cool.” What followed was, “a felting frenzy!” laughs Eliel. “As the house got more and more full of her creations, Mark says, ‘you need to do something with this stuff,” she says. Still, as her collection of felties grew, it took six months for Mark, her son and a neighbor to convince her to try a Market booth.

Felting requires minimal equipment: some raw wool, dyed if you want color; felting needles; and a thick piece of foam to protect your skin from the thin, flexible and very sharp barbed needles. Wool fibers have a natural tendency to hook together, and the barbs on the needle help it along. The felter simply has to hold the felt and punch the needle through it repeatedly while gently shaping it. Keep your hands out of the way! The more you puncture the fibers with the needle, the more fused they will become. This technique can be used to create a myriad of shapes or join different pieces of felt together. If your creation doesn’t turn out like you intended, peel it apart, reshape it, and start again.

“Felting is so forgiving. The wool feels good and the colors are gorgeous,” says Eliel. “I have 40 or 50 colors I use so that’s endless possibilities.”

When Eliel first saw Nancy Bright’s artwork, she was a “broke single mom” living in Ashland. “I took one look at her painting called “Cradle of Love,” of a mom holding a baby, and it was just what I needed,” Eliel remembers. “I could only afford the cards. I decided that, some day if I ever have an office, I’m going to have her work on my wall.”

Eliel had no idea that Nancy lived in Eugene until she moved here herself and saw her at the Saturday Market. Nancy normally does not illustrate children’s books, but was taken by Eliel’s storytelling and picked “The Meadow” out of 10 stories that Eliel provided. “The first time I saw her sketches I cried because they were so wonderful,” Eliel says.

Just as Eliel’s needle repeatedly puncturing the wool slowly shapes it into a figure, so has the meditative focus helped to shape her grief. In January of 2013, Eliel lost her 23-year-old daughter Maia, who was away at college, to complications from influenza. Maia helped edit the story for “The Meadow,” and Nancy drew a gentle pencil sketch of Maia for the dedication page.

As a kid, Eliel says she spent most of her time either reading books or writing stories. Now, Eliel teaches classes in the felting technique and makes about 50 “felties” per week. Her creations range from dragons and Christmas elves to penguins, ducks and even vegetables. Anything she can recreate in three dimensions is likely to turn into a felted figure. After the felties come to life, Eliel draws on her storytelling to create unique stories and jobs for each feltie.

“There are some people who come by my booth just to read the stories,” she says, “and I have a lot of people who special order a feltie so that I can write a story for that person. I sit down and the feltie tells me what it does and I just write it down. The story just comes out.” For the winter holidays, Eliel brings a large number of felted elves to life, along with Mr. and Mrs. Santas of all sizes and in three different skin tones; snowmen; nutcrackers and a variety of ornaments.

People have become so attached to their felties that they bring them by Eliel’s booth to say hello, of they take them on their trips and send her pictures of their felties wherever they are. “I actually have a map at home where I’ve marked everywhere that one of my felties has gone,” she says. “My favorite story was that a lady bought her husband a dog feltie and when he saw the feltie he cried. Most people who walk by my booth smile. I also am really amazed at some of the kids that come up and they’ll just watch me make a feltie from start to finish. That’s really neat to me. I think its great for kids to see someone create something right in front of them.” 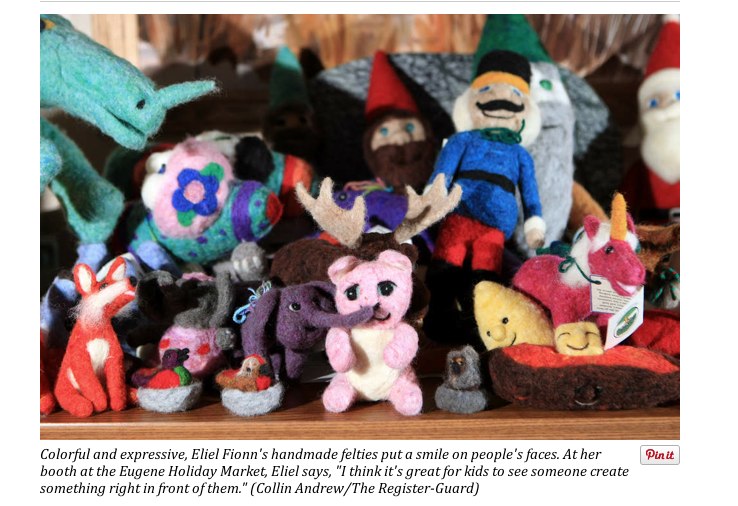 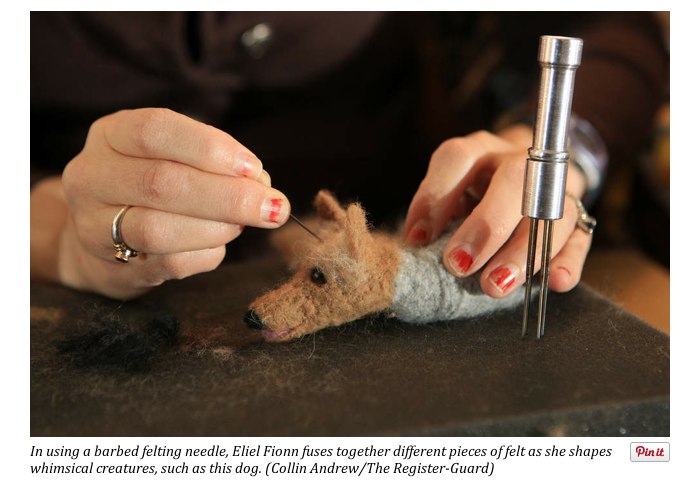 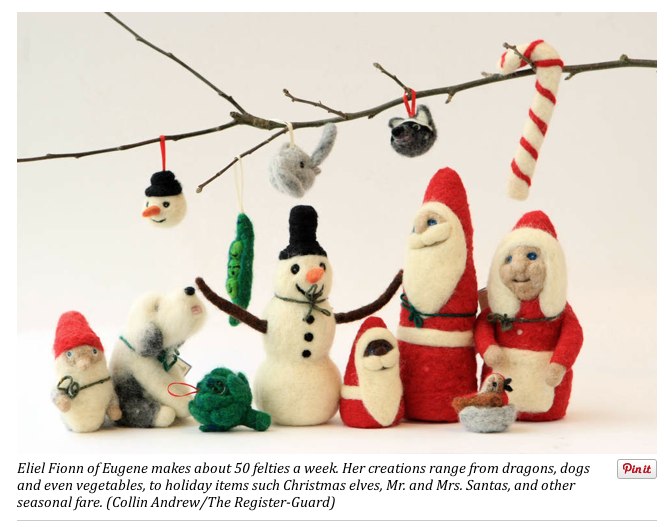