By Vanessa on March 4, 2015 in Children and Families, Health and Wellness, Outdoors, Register-Guard 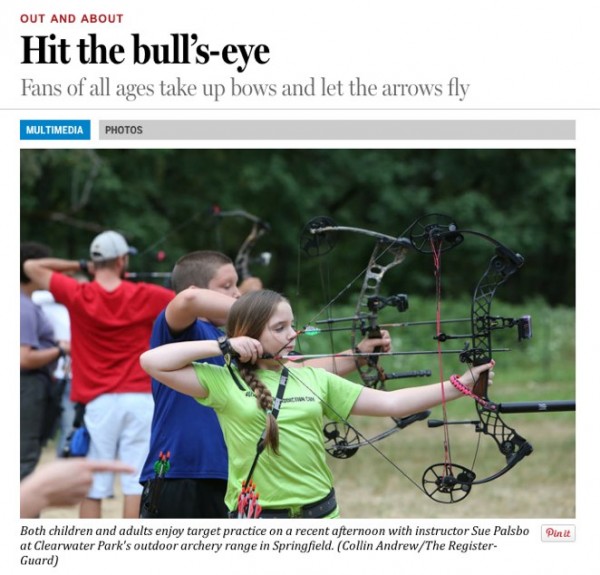 Does the thought of archery conjure images of Robin Hood’s classic longbow? High-tech carbon fiber compound bows for the modern hunter? The recurve bow, for Olympic-style target shooting? In Eugene, the answer can be all of the above, as options for many different types of archery programs abound here.

Sue Palsbo, 62, got into archery at age 50 through her son. “I went with him to one of these clubs in the Washington D.C., area and I said, ‘Why am I sitting here watching him have all the fun? I’m going to get into it too.’” She is affiliated with USA Archery, the organization that selects the members of the Olympic team and the World Team members for international competition. She is Oregon State coordinator for the Junior Olympic Archery development program, and has been teaching beginners for about seven years, including beginning longbow and the Olympic recurve bow for the Archery Club of Eugene Springfield, which she helped to charter about a year ago.

“We add two or three new members a month,” Palsbo says. “It used to be just kids, now their parents and even their grandparents are getting involved. Because archery is fun!”

Palsbo often takes her groups out to the two field archery clubs in the area that lead monthly walk-around shoots from February through August. Cascadian Bowmen and Green Valley Archers each have outdoor ranges available to members.

The Cascadian Bowmen’s 52-acre range in Noti could be thought of as a golf course. “There are little markers that indicate distance where you shoot from that you could think of as a tee,” says Scott Anstine, the club’s vice president. “There’s a route that you take that’s marked, and you can keep score or not.”

The range has four different groomed trails, each with 14 straw bale targets. Anstine coordinates the 3D shoots, which incorporate life-size, realistic foam targets such as raccoons, deer, bear and turkeys. Members can use the range year-round, along with a 7,200-square-foot indoor range.

“Sometimes you get the place to yourself out here,” says Anstine, “because there’s four trails and if there are only one or two other people out here, you don’t even see them.”

During the 3D shoot held August 2 and 3, a group of four people went out to walk the course. Bob Buckridge joined the Cascadian Bowmen in spring, and it was his first time shooting a 3D event. His 28-year-old daughter-in-law, Meaghan Buckridge, said that her and her husband, Bob’s son, were exploring archery because they wanted to go on elk hunts together. Meaghan’s father, John Hunts, also shot the course. Each of them carried compound bows from local manufacturer BowTech. Bob’s wife, Cindi, and John’s wife, Stacy, walked along as well, carrying only binoculars.

That multi-generational appeal is meaningful to coach Sue Palsbo. Just a month ago, Willamalane Parks and Recreation opened a free, public target range at Clearwater Park. “Archery is an accessible, activity perfect for families to do together,” she says. “Our club goes out twice a week, on Tuesday and Wednesday, and the place is packed.” The youngest member is in fourth grade, while a couple of members are grandparents.

Several national and regional champions live on our area. Marcola resident Ben English earned the title of National Field Archery Association pro division national champion last year. Cody Offchiss, a sophomore at South Eugene High School, is one of about 24 youth from around the nation who have been selected to train as an Olympic prospect. Eugene resident Mackenzie Caldwell, who turns 12 in October, won gold in the February 2014 youth competition. “Two years ago, I went to a Girl Scout camp in Washington that was originally for cooking,” says Mackenzie. “But we did an hour of archery for two days and I fell in love with it.” She is ranked first in Oregon in the category of female cub bowhunter free style. She hopes to try out and compete for the 2020 Olympics.

“What I really love about it is that I’m a competitive person,” she says. “Archery is all about focus, mental focus, physical focus, and all that kind of stuff. I keep in touch with all the people I’ve shot with, especially the girls my age.” Mackenzie used to play softball, but she’s happier in a non-team sport. She practices at the Willamalane archery range, and is grateful for that new option.

Palsbo likes the challenge of shooting “barebow,” which means using no sights, no arrow rest, shock absorbers or stabilizers. “It’s just you and the bow,” Palsbo says. “Some people are into the high-tech stuff. I’m not into it that much because the amount of money you spend really does make a difference, and if you are in a competition with someone, they may not be as good an archer as you but they win because they have better stuff.”

BowTech in Eugene manufactures and distributes compound bows and equipment. Spot-Hogg, in Harrisburg, makes bow sights, arrow rests, and other accessories. West 11th Archery sells some compounds but mostly longbows and recurves. In wintertime, Palsbo’s club shoots at this range. “But we’re running out of room!” she laments. That’s a testament to the increasing popularity of archery in Eugene. 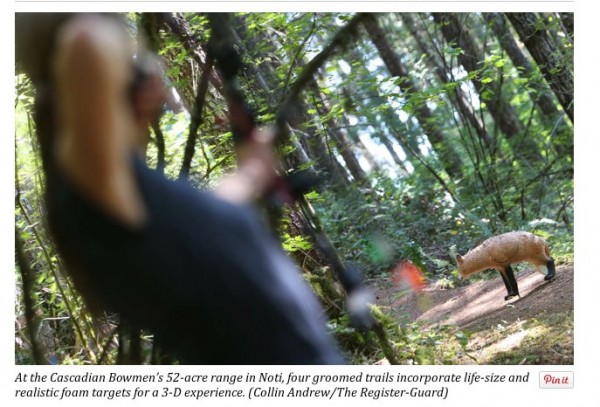 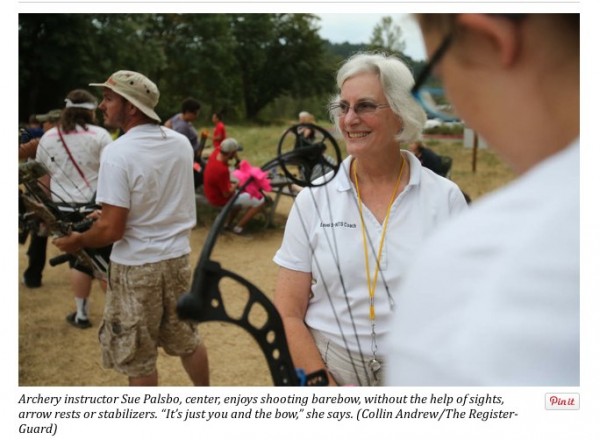 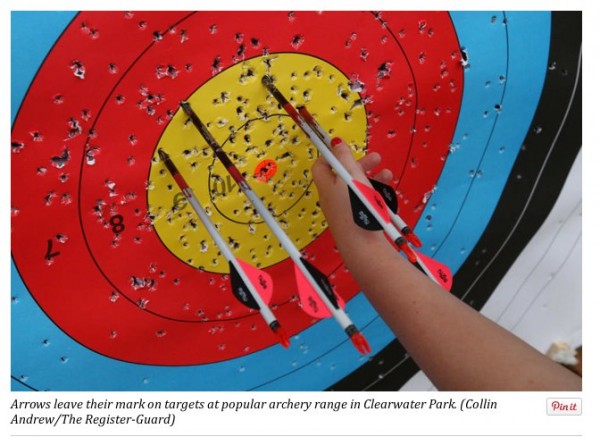 2 Responses to Hit the Bull’s Eye With Archery