By Vanessa on March 4, 2015 in Home Walkthroughs

This beautiful mid-century modern home was architect-designed and the original owners designed the home around placement of a Steinway piano selected for the home by Fritz Steinway himself. Gorgeous originally, the remodels made it perfect. Published in April 2014. 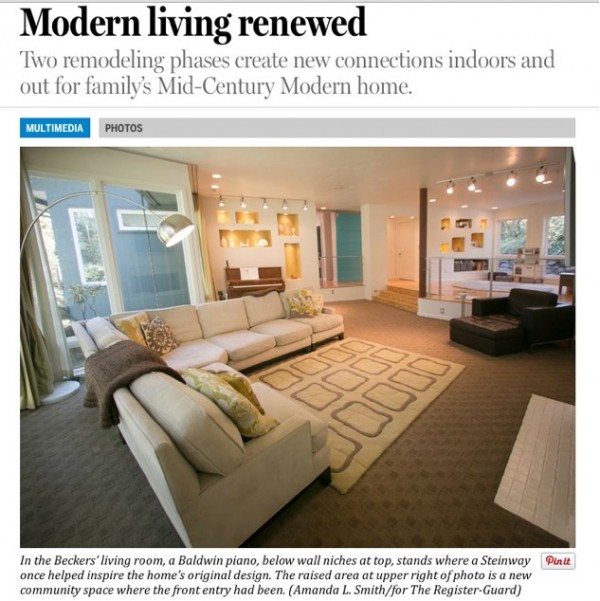 A mid-century modern home remodel brings light and space to a home in the trees.

There’s a neighborhood in Eugene where the streets are so narrow they look like driveways. As the roads wind up into the hills giving way to the 78-acre Hendricks Park, the homes become statelier. Ellie and her husband, John, are the second owners of a 1968 home, architect-designed in the mid-century modern style. The home’s original owners, Elaine and Cecil Armes, designed the home around her Steinway grand piano. The instrument was selected for the home by Fritz Steinway himself, and in 2005 was gifted to the University of Oregon School of Music and Dance.

After Elaine’s death, the home was sold through her estate. Ellie says the home sat undiscovered, because of perpetual shade from the yard’s large firs and an interior dimmed by dark walnut paneling. But that view convinced Ellie it was worth it. “At the time, I was not working from home like I am now,” she says. “I don’t go out a lot so I really wanted something peaceful and calm.” When Ellie opens the floor-to-ceiling green curtains in her living room, she sees only trees, rhododendrons and a pond with water lilies. “When I saw that, I felt like I could breathe,” she says.

The Beckers underwent two remodels—first, the kitchen and a modification of the dining room fireplace by Richard Shugar of 2 Form Architecture with builder Doug Booher. For the rest, the Beckers worked with Eugene architect Nir Pearlson and general contractor Paul Allen to maintain and celebrate the modernist lines of the home, while bringing in much-needed light and space. “It was already a very well-designed house but it had some weak points,” recalls Pearlson. “The main entry was at the back house in a spot that was seldom used. And, there was no real connection between the main living area and the back of the house or to the outdoors.”

The home was designed with the living area as an intersection of two grids. Pearlson kept those lines and planes, but extended the plane to the right off the living room for a master suite addition where the second bedroom used to be. Pearlson switched the main entry to the front of the home, and turned what was the main entry into a light-filled community room where the two Becker children, Hadley, 9, and Madison, 5, play. The living room houses a proud upright Baldwin piano in the same spot as Elaine’s Steinway.

In keeping with the modernist style, the furnishings are simple yet comfortable. Cabinetry with no protruding knobs or handles hide miscellany. In the living room next to the wall-mounted television is a custom-made cabinet that John designed to hide the entertainment system and wires and gadgets. “He had this made to put everything away so we can keep it clean and simple,” explains Ellie. “The whole house is our stress-less life. It’s about being peaceful and about family. Every surface is washable.”

To the left of the living room is a brick wall, original to the house. Beyond that is the kitchen with custom cabinetry of light-grained rift-sawn oak by The Cabinet Factory. “They made sure that all of the grain lined up across every single door front,” says Ellie. A breakfast bar is made of maidenhair fern in resin.

To the right of the living room are the bedrooms. For Pearlson, the two hefty walls in the living room represented an opportunity. Nooks holding a collection of white Jonathan Adler ceramics were carved into the thick right wall. The plane of that wall is seamlessly extended beyond the glass window to the master suite addition.

Ellie imagines the living room and community room as part of nature, and Pearlson helped achieve that effect by opening up the home to the landscape through skylights and windows. The living room is decorated in light greens and browns, anchored by a geometric Angela Adams rug. In the community room is a circular Angela Adams rug in shades of blue called “Ocean.” On the walls are prints of Angela Adams designs, one of which is a larger piece containing the “Ocean” motif.

Ellie design the cabinetry in the home’s three bathrooms based on designs she had seen in a magazine with cutouts rather than handles. The counter in the master bath is a quartz remnant the couple found, and the cabinets are gray. Rather than a tile backsplash, Ellie chose white rocks. She also chose Penny Tiles from Modwalls set in dark grout. “The tile people kept trying to talk me out of using the dark grout,” she says, “but I’ve never regretted it.” Echoing the resin in the kitchen is a privacy window near the tub of ginkgo and thatch set in resin.

Extending off the living room is a hallway, with each girl’s bedroom on opposite sides, with a bench and a large bright window at the end. Beneath the bench is a secret passageway connecting the girls’ rooms. A bright blue barn door can be slid shut once the kids are asleep. “With the door shut, the bedroom wing is private,” says Pearlson, “but when it’s open you can see through it to this big window, which again connects you to the back of the house and the landscape.” Another bright orange barn door in the master bedroom is a nod to the colorful doors on dark houses common in England, where Ellie’s parents are from.

The Beckers enjoy their patio, which was designed in a mosaic style by Allen Bosworth. A retaining wall built of native stone found on-site is in the process of being built, to help hedge in the native garden and rhododendrons and provide another outdoor area. “We come out here all the time,” Ellie says. “It really is a peaceful spot.” She and John take advantage of the proximity to the campus area and go on walking dates to dinner and basketball games. Ellie says the home is a “perfect marriage” of both her and John’s style. “And, we tried to stay thoughtful to the work Elaine did,” she says. 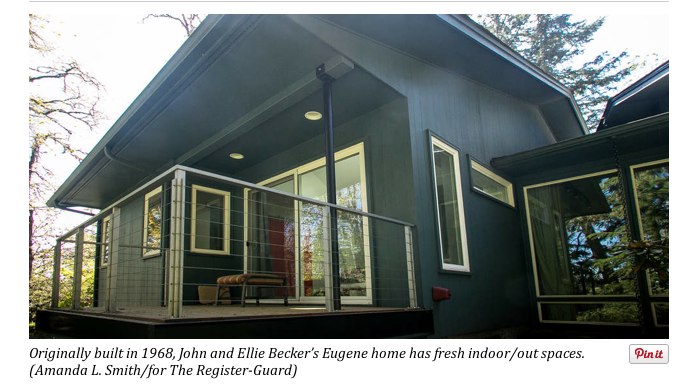 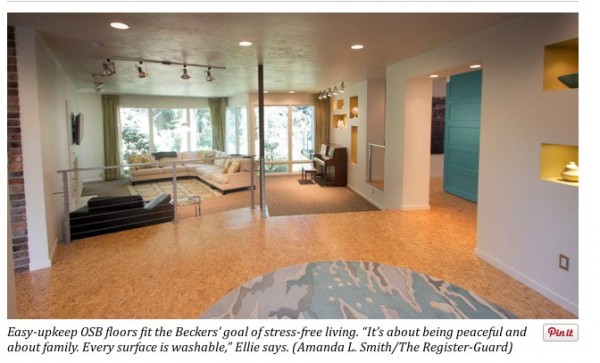 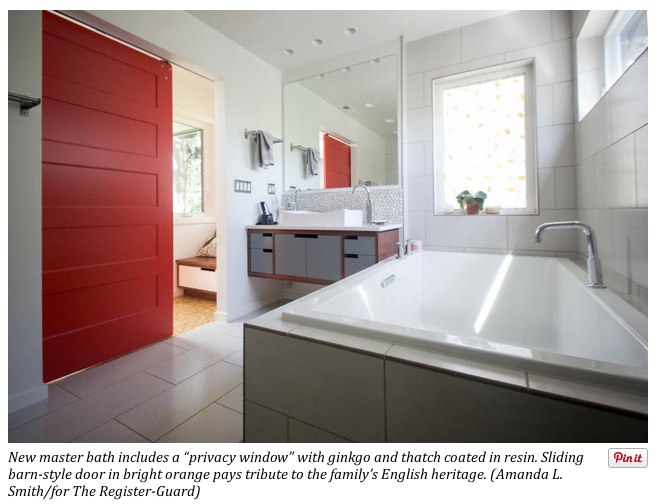 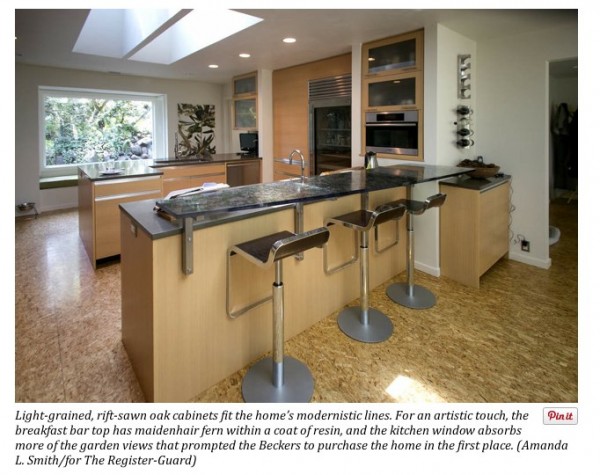 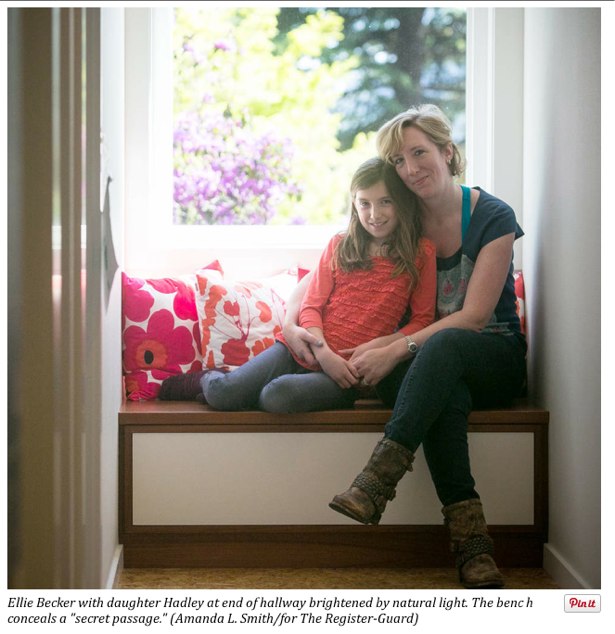