By Vanessa on July 8, 2013 in Health and Wellness, Register-Guard

The last Friday in June 2013 I attended a training camp for footbaggers. I admit I was woefully uninformed about the camp before going. While the camp is open to anyone who wants improve their footbag, or “hacky sack” skills, I had no idea just how high the caliber of the attendees of the camp was to be.

Turns out, the instructor, Mag Hughes, has been a world champion footbagger since the sport’s inception in the 1970s, and many of the champions that followed him went through his training camps in years past. Co-instructors held women’s singles and doubles net bag world championships. And, footbagers flew in from around the world — Montreal, Germany, Switzerland — to attend competitions in the United States as well as this training camp.

I was just there to observe, but I bought a foot bag to take home. Most likely, I will not end up on the world championship circuit, but as the article says, kickin’ it with a buddy is just as much fun now as it was when the game was invented, and, no gear is needed other than a squishy ball slightly larger than a golf ball. Pocket size.

After this article appeared in the Register-Guard, my editor received an email saying that the origin of the game was in fact far older than what is commonly represented. The letter appears on the right side of this article. What do you think? Anyone ever heard anything to corroborate this story? And is it just coincidence that the letter writer’s is C. Chan, the fictional detective that travels the world solving crimes? 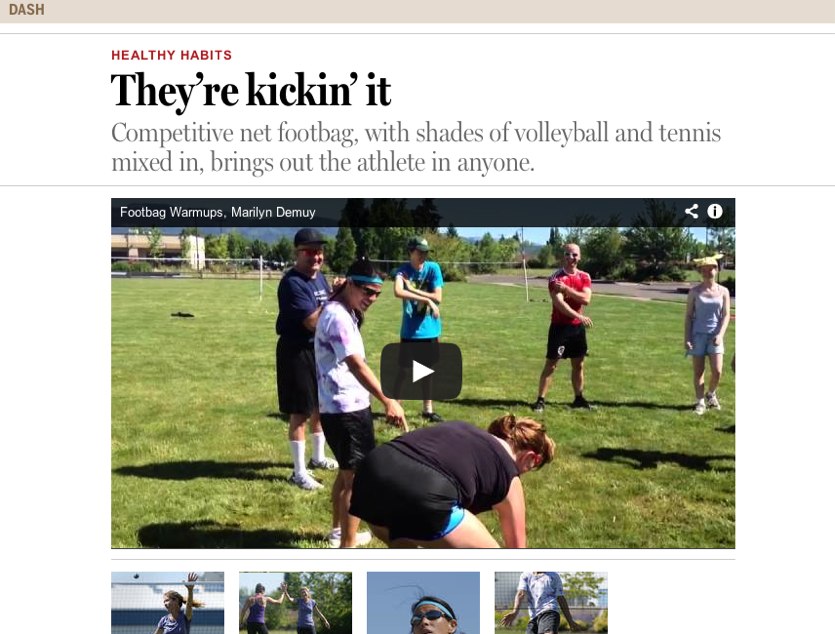 Kickin’ It
Competitive net footbag brings out the athlete in anyone.

How much can a small leather ball filled with sand do? Quite a lot, it turns out. Footbag has come a long way since its Oregon City, Oregon, origins in 1972 as a game of “Hack the Sack” with a homemade beanbag.

For years, a circle of people kicking a ball back and forth was a ubiquitous site at any campground, college campus or backyard barbecue. It quickly became a worldwide phenomenon, and in 1976 footbag became an official sport with a governing body for competitions. Following the model of volleyball and tennis, players volley a footbag over a 5-foot-high net on a badminton court, with games played to 11 or 15 points. Freestyle footbaggers compete via routines choreographed to music. Both the footbag and the sport are sometimes referred to as hacky sack, though Hacky Sack is a trademarked name.

At a recent 2-day Willamalane Rec Center class, a group gathered from around the world to train and share their footbag skills. Instructor Becca English-Ross says the sport, though welcoming and accepting to all ages and skill levels, still has far more men than women, and she wants that to change. “In 2010, a whole bunch of women got together to look at what we can do to get more women in the sport,” she says. “The men have always been very positive and have brought a lot of women into the game, but we wanted to see what we could do.” One of their ideas was a training camp. This is the third year the camp has been held here, and will be held in late June next year.

The camp is timed to coincide with the schedule of footbag competitions. Chris Bock, who came from Germany, and Marilyn Demuy (the reining women’s singles net champ), from Montreal, were in the United States for the Sixth Annual Windy City Cup Footbag Net Championships held in Chicago from June 21 through 23, where he and Demuy both placed in the open singles and open doubles categories. After the camp, they headed to Portland for the U.S. OPEN Footbag Net Championships. Recent competitions were also held in Seattle, Paris and Venezuela. “Footbag is a lifestyle,” says Chris Bock, “I’m addicted.”

Jody Welch, who is a camp co-instructor, holds the most World Footbag Net Titles ever. Camp instructor Scott “Mag” Hughes, is a legend in the sport and long-time tournament director of US Open Net Championships. A many-time World Footbag Champion himself, countless numbers of pro players have attended Hughes’s training camps.

So with the caliber of skill so high, is there room in this camp for the novice player? “Absolutely, no experience necessary,” says English-Ross. Last year her 9-year-old niece attended the camp, and this year, her 9-year-old son, Jessie, is learning to play. He competed for the first time last year. 10-year-old Joey’s parents are both professional kickers, and he’s here to improve. There’s also a woman who began playing just last year.

Net bag differs from the casual kick circle in that the ball is much harder so they travel farther. “Touching the ball with knees or above is a foul,” says English-Ross. “So you have to get out of the way of the ball. The dynamics of the doubles game is very much like volleyball. It’s super fun, and I tell people that are just starting out, if you’re having any fun now, it only gets better.”

Yes, footbag is competitive and highly athletic, yet if the competitive aspect isn’t your thing, the “energy circle” of players cooperatively keeping a ball off the ground is just as much fun now as when it was invented. Kick bags are affordable, with good quality bags available for under $10. Balls can be made of leather or cloth, and filled with sand, or plastic or metal pellets. If the bags get dirty, just wash them with dish soap. And, this is only ball sport where room in your pocket for the squishy sphere is all the gear you need. 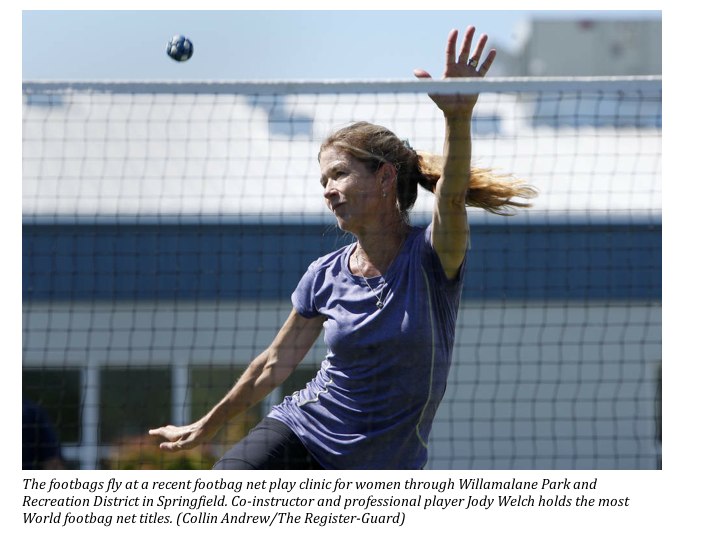 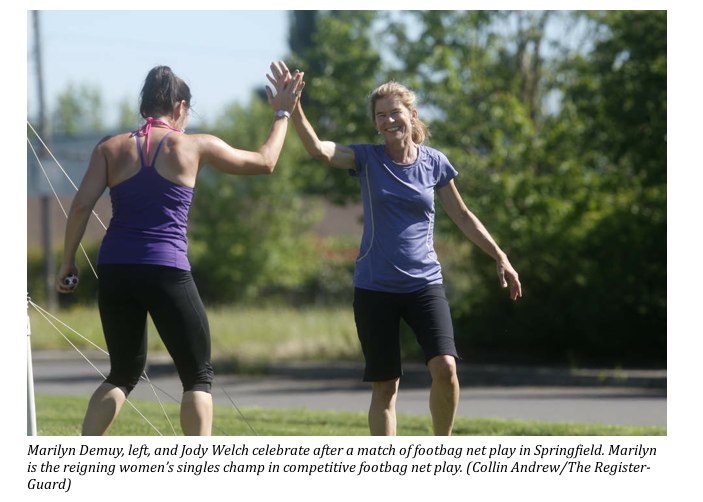 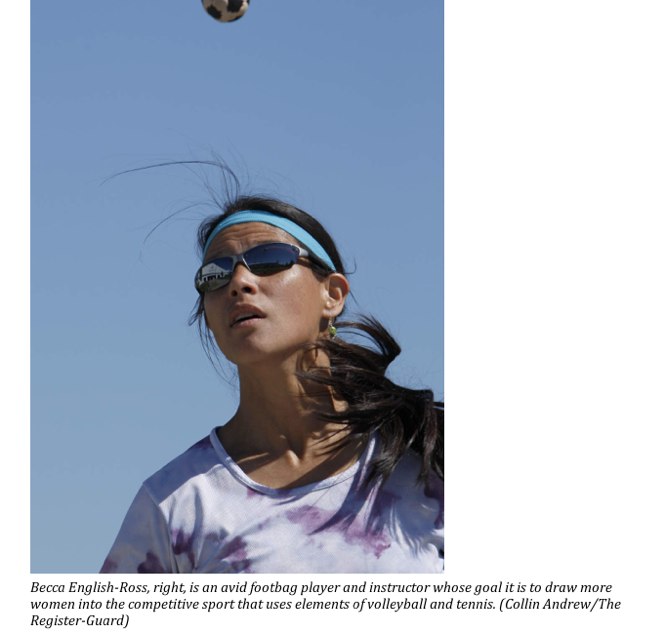 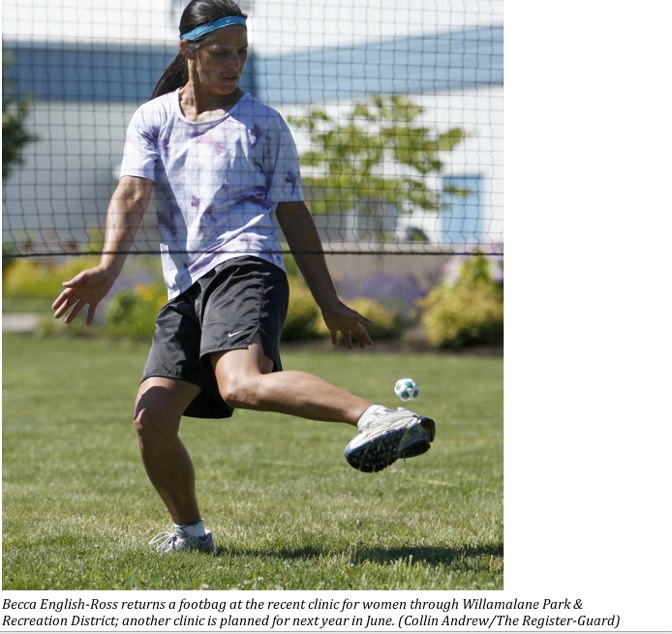 dear editor:
there was an article in “Dash”, about the game of “hack the sack” that was invented during the 70s, becoming a competitive sport. I need to tell you the true story about the game; it did not originally come from the United States, it came over from China, from an immigrant who came to the United States at the age of 14,from the northern province of Hunan. This game was played in very old mainland China, even before the communist revolution there.(the immigrant was originally born in mainland China, the same year as the Boxer Rebellion there.)

This immigrant settled in Eugene Oregon, and as an adult, during the 70s, decided he wanted to play the old Chinese game, and revive it in the United States. I know this because I was there.

He was very successful in helping other young people in the group, to learn the game, and the author of “hack the sack” was one of the young man in the group. Without telling the immigrant, he decided to take the game, give it that name, and turn it into a business. The rest is history. Unfortunately, the older immigrant, when he found out about this, was very bitter, but did nothing about it.he never sued him, he never told anyone else.that is why you had to be there, to know this information.

I do not know how much history and culture of the time before the Communist revolution in China is left as evidence. During the revolution, so much culture, and ancient tradition was destroyed, that I cannot prove that this game came from northern China, and this immigrant brought it over at that time, and settled in Oregon.

You would have to look through historical sites, or books or information about the northern province in mainland China before the communist revolution. Or, if you have very old survivors of northern China before the communist revolution, you would have to see if any of them ever talked about it, or had any memory of it, and wrote any books or leftover notes. Unfortunately, I do not know the name of the game originally in Mandarin.

however, I do know that the appropriate way to play in a group, was to stand around in a circle, trying to keep the little sack in the air, by hitting it with the inside of your foot, bounce it in the air, and even use the other foot to hit it again.you could play by yourself or with teammates. I do not know if it ever was used in China as a competitive sport.however, that is originally where it came from, and that is how old it is.

If you cannot find any very old historical evidence of this, then of course I cannot prove this, and you would have to decide either to believe it, or not. That is up to you.however, I thought you would like to know just how old the game is, and that I am sure the immigrant would be very glad that Oregonians like it so much, and have decided to make it a competitive sport. That is exactly what he intended, was for the game to be revived once again.