By Vanessa on April 7, 2015 in Boomer and Senior News, People Profiles, Retirement, Seniors

This appeared in the April 2015 edition of Boomer and Senior News. Tony Losco has so far lived for 8 decades and has had a lifetime of experienced in each one. He’s self-published a memoir about facing a court martial for mishandling a message delivered to the top-secret coded communication center where he was stationed during the 1950s in Italy.

An Italian man’s language skill led him into the military justice system and a lifetime of adventures after service. 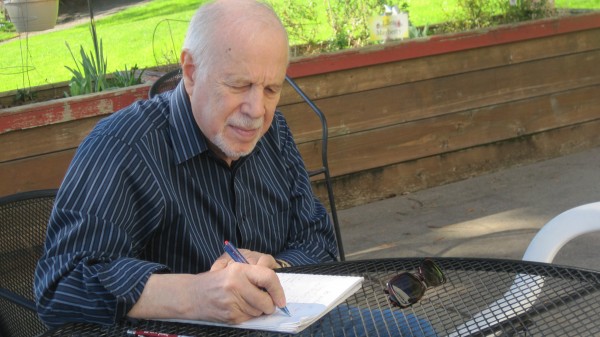 Tony Losco, in the garden of his Eugene apartment building, writes daily on his memoirs about his life and experiences in the military and after in Germany and Italy. Photo by Vanessa Salvia

The hardest thing about talking with Anthony Losco, or Tony, is deciding what to talk about. Each decade of his 81 years has brought with it a lifetime of experiences, from his upbringing in a traditional Italian family in New Jersey in the 1930s to facing a court martial in the 1950s to a non-profit video production company he set up in his retirement. “Somehow a lot of things I’ve done and experienced became important,” he says.

Losco’s Neapolitan parents, Antonio and Amalia, had two sons and a one-year-old daughter in 1931. They left their home in Paterson, New Jersey, with the children and returned to Italy by boat, so the grandparents in the old country could meet them. The girl developed an infection and died. “It really affected my mother,” he says. When Losco was born in 1933, she dressed him as a girl for his first three years, and even entered him in a beauty contest. “I came in second place,” he says. “I’m glad I didn’t win it!”

Losco’s father had a vaudeville theater troupe (which ended abruptly after Mussolini declared war), and the family was conscripted to help out, with Amalia sewing costumes and the boys making and painting scenery and props. After that ended, his parents owned a market in the Italian ghetto. They kept it stocked with salamis, cheese and coffee that Losco roasted each Monday after school. At home he and his brothers weren’t allowed to speak English. Losco was fluent, and still is, in several Neapolitan, Sicilian and Southern Italian dialects.

These factors seem to set the foundation for what Losco’s life would become numerous years later. In the military he was granted top-secret clearance because of his language skills. After the military he became Entertainment Director for the Department of the Army, directing and producing shows with American military, and on one occasion, a large show with German and American soldiers together.

After that he incorporated a company in Germany that won contracts to import goods for the Army, Navy and Air Force PX system. He’s been writing many of his experiences down as short stories, and he has a short memoir about his experience facing a court martial called Five Bells to Hell.

These things might not have happened though, if he hadn’t been able to graduate from high school. At home and on the streets he did fine, but in school Losco barely participated, unsure how to construct phrases in English. By his junior year he was failing every subject. At 16 Losco convinced his parents that he would be better off moving several miles away to a house his parents were building in the countryside. “It had a ceiling and a roof but the walls were bare,” he says. “It had water from a well.”

The house was in a different school district, where almost from the first day, he says, a teacher told him that she would help him get into college. “She did,” Losco recalls. “And that changed my life. I had no idea about college. I thought I wouldn’t finish high school.”

At 20, in 1952, Losco joined the Army Enlisted Reserve at Fort Dix, New Jersey. After two years he volunteered. “It just happened that NATO had formed the year before and Italy had joined so they were looking for people who spoke Italian,” Losco says.

He received a top-secret Italian language clearance and requested to be stationed in Italy. He was sent instead to 7th Army Headquarters in Stuttgart-Vaihingen, which was the command center for all U.S. Army forces in Germany, where he was assigned to a top-secret communication station where coded messages would come in from Army units stationed around the world. The messages were rated from 1 to 5 bells in order of importance. Five bells meant an attack was happening, and these messages had to delivered into the hands of the Commanding General within two minutes. Four-bell messages had to be delivered within 20 minutes.

“We would receive messages day and night,” Losco says. “Most of them were routine messages coming in from every unit in the world. One day five minutes before I am to be relieved a message comes in from a unit stationed on a mountaintop in Turkey and it was 5 bells.”

The message relayed that a squadron of unidentified fighter jets had flown overhead toward the Suez Canal. “I think, ‘Someone’s trying to pull a shrewdie here,” Losco says. “This doesn’t sound like 5 bells. The people on the mountain mislabeled it as 5 bells but it’s really 4 bells.”

The sergeant relieving him would have a better idea of what to do, Losco thought, so he just sat tight. “The sergeant delivers the message then comes back and tells me, ‘You’re to sit here and wait, you’re going to be court martialed.”

Losco is reluctant to reveal the outcome, which he wrote about in Five Bells to Hell, because he’d like to encourage people to read the story for themselves. It’s full of memories from that time and place, and at 80 pages is a quick read. He asserts that he never should have been given the message center assignment, because his top-secret clearance was for a special case that wasn’t noted in his files. After he made an understandable error, the chain of command then began a campaign to cover up their own mistakes in placing him in that assignment. “It’s an exiting story,” he says. “Was I punished? Yes. I was innocent but punished.” Five Bells to Hell is available for download from Amazon for $3, and the proceeds benefit Losco’s non-profit production company.

After leaving the Army in 1959, Losco’s adventures hardly slowed down. During the 1960s he returned to his entertainment and vaudeville roots, producing shows and receiving USO entertainment shows for the Karlsberg, Mainz and Wiesbaden areas in Germany.

He also had a film team and had done some work for the Wiesbaden air base, for whom he filmed a show which was part of The Ed Sullivan Show. It seemed that Losco was on the verge of being able to work on television production when Sullivan’s show was cancelled.

From 1964 to ’66 he owned a restaurant in Venice, Italy, called Club Nabucco, which was very successful. “Princess Margaret, who was the Princess Diana of her day,” was spotted eating there,” Losco says.

In the 1970s, Losco began selling new and used cars to people in the military and in 1978 was the first one to get an Esso gasoline station on military land under American jurisdiction. In the ’80s he started a business called Conusstan and traveled to England, India, Romania, Belgium and China to import fine rugs for the PXs. “I’m certain that there are thousands of people with Conusstan rugs still in their homes today,” he says.

Within his warehouse full of goods in Kaiserslautern, in the American sector of West Germany, Losco had space to spare. “I introduced Baskin-Robbins to Western Germany in 1983,” he says “I was the sole rep for them with three locations and it was going beautifully until I had an argument with the people that owned Baskin-Robbins in London.” A few years later he sold his locations to Haagen-Dasz.

In 1987, he encouraged Dominos pizza to move from Düsseldorf in the British sector of West Germany to the American sector. “The people at Dominos told me that they had set up in Düsseldorf because someone had thrown a dart and that’s where it landed,” Losco recalls. “I told them, ‘I’ve got a place in my building,” and talked to them about it for a year before they came.”

They opened up next to the Baskin-Robbins locations in Kaiserslautern. “The first week they had nine telephones to answer for orders and they sold so many pizzas they ran out of everything before the week was up!” he says. They sold over $45,000 worth of pizzas that week. They had to take the nine phones off the hook.”

After all of that, retirement seemed rather boring. From 1994 until 2000 Losco lived in Germany and Hawaii. He lived in Italy from 2000 until 2004, and worked with students from the University of California, Long Beach on a documentary of the Piedmont region. He moved to Eugene in 2004 to be near his two sons who live here.

Losco wanted to get back into video again, so he formed That’s Amore Productions in 2007. With University of Oregon students, he has documented the work of Sister Margaret Graziano, who taught art to Lane County inmates, and a huge metal recycling machine that is being installed at a Eugene scrap metal yard.

Losco works daily to write down his stories and memories of what he experienced during his military career and work while living in Europe. Just sit down with him and ask him to tell you a story, and the next question will be, “How much time do you have?” 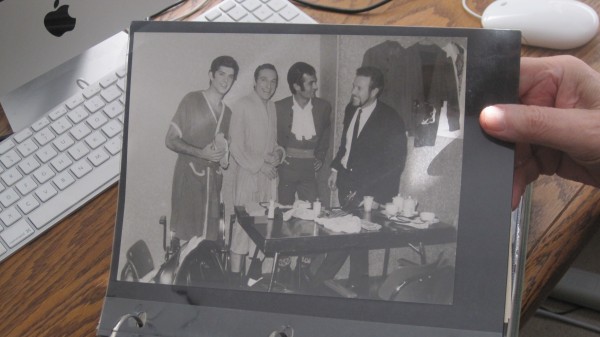 In this photo, Tony Losco, far right, stands next to entertainer Buddy Greco after one of the shows he presented in Germany. Photo by Vanessa Salvia