By Vanessa on April 7, 2015 in Boomer and Senior News, People Profiles, Retirement, Seniors

This appeared in the April 2015 edition of NW Boomer and Senior News. Dawn Baby is super cool and stylish and can cut anyone’s hair, whether they are an ’80s boy, a ’90s chick, or 80 or 90 years old. 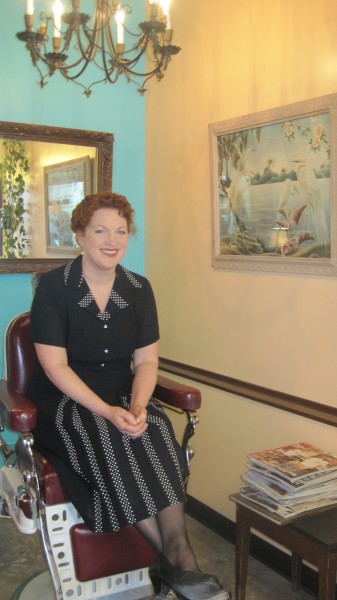 Walk into just about any hair salon these days and ask for a shampoo set or victory rolls and most stylists will have no idea what you want. Walk into Dawn Baby Salon in downtown Eugene, however, and stylist and proprietor Dawn Baby will not only get right to work, she’ll most likely be looking the part in a 1940s or ’50s dress with her own hair in a vintage style to boot.

Dawn Baby’s grandmother, Irene Thompson, was a beautician along with two aunts, Beverley and Sally. Dawn Baby’s daughter, Amelia Hart, is now the fourth generation in the family with a hair stylist license“I’ve been hair stylist since I was 17 years old and,” Dawn Baby says, “and as soon as I was old enough to get my license—you have to be 18 to take your state boards—I’ve been cutting hair and I’m 55 now. I can’t imagine doing anything else.”

Dawn Baby’s real first name is Dawn, but she wasn’t fond of what her name would be after getting married 17 years ago. “His last name was Lotz, and I didn’t want to be Dawn Lotz,” she says. “It was too much like ‘Don Knotts.’” Her husband pointed out that they could change their name to anything they wanted.

“People have been calling me ‘Dawn Baby’ since I was 15 or 16 years old. We thought about being Rockefellers or Kennedys but I was like, ‘So many people call us ‘Baby,’ why don’t you be Mr. Baby and I’ll be Mrs. Baby.’” She’s gone by Dawn Baby ever since. Their son, Sterling, received a “normal” middle name, which he chose to use as a last name when he started getting teased for being Sterling Baby.

In the 1970s, Baby got her license thanks to a work-training program that paid her minimum wage to attend beauty college. Baby’s daughter Amelia, 25, joined the salon five years ago after getting her license. Baby’s older daughter graduated from college with a lot of debt, and Baby encouraged Amelia to get her hair license, at least until she could figure out something to do that would not result in the debt load of her older sister.

Amelia grew up in Eugene, although she just relocated to Portland. She is a colorful figure, known to sport pink, orange or purple hair that may change by the week, and specializes in hair color and makeup.

Baby, on the other hand, braids and pins her curly red hair, sometimes letting the bangs curl around her forehead while the rest is in a loose bun or ponytail. She opened her salon 7 years ago after buying the shop from a barber named Johnny. “It was Johnny’s Barber Shop for 50 years,” Baby says. “It’s been a barber shop as long as the building’s been in existence, for 85 years.”

Baby doesn’t have many older clients, unfortunately, she says, but she does have one man who “came with the building.” “I couldn’t even charge him how much I charge because Johnny had only been charging $10! I only raised the price a little bit because I didn’t want to break the bank with him or lose him,” she says. “He’s in his 80’s. He trusts me to do his hair.”

Even though cutting hair is a service, working with her clients is a bonding experience, and she gets to know them. “It’s made for some really awesome friendships,” she says. “Every six weeks you spend an hour with someone, after a while you get to know them. Sometimes you don’t even see your friends that often or that long.”

She isn’t sure why her family has four generations of hair stylists, although she thinks Beverley and Sally became beauticians because their mother was one. It seems significant now that they all became hairdressers but at the time it didn’t seem like something to talk about. Grandma Irene helped run a hotel in Colorado with a salon, and also had a salon in Riddle, Oregon. “The building still exists in Riddle and it still is a hair salon,” says Baby.

Beverley had nine children, so Baby thinks she got into hair because she had so many kids that needed haircuts. “She would do all of our hair,” says Baby. “It was like sewing or cooking, you’re saving your family money.”

Baby’s father was in the military, so whenever he was gone they would go to where her mother’s parents were in Colorado. When he returned they would reconvene in California. She’s been in Eugene since 1971.

Baby says Grandma Irene had the title of beautician, but she really wasn’t that good at hair cuts. “It was all about the style then,” she says. “You would get your hair cut to have it styled and you would wear it that way for a week until you would come in and have it shampooed and set again.”

Baby provides hair styling services for men and women for special events such as fashion shows and weddings, where people want a fancier, vintage look. When she wasn’t working for a salon or driving to people’s home with her freelancer’s license, she worked with the Eugene Opera on hair and also worked with television commercial and video production companies. “When I started I wanted to be a makeup artist and it turned out I was really good at hair cutting,” she says. “Everybody needs a haircut, not everybody needs their makeup done.”

She wishes that more people would come in and ask for vintage styles, but there’s not a huge market for it. “I wish I could do more of it,” she says, about vintage styles. “I like that people used to put effort into the way they looked more than they do now. There were more rules. People wore hats and glove. You would get dressed up to do stuff because you didn’t get to do much. You didn’t go out in your gym clothes.”

Baby became attracted to vintage clothing and style when she was in beauty college and couldn’t afford new clothes. “I like the way old clothes look,” she says. “I like the way they fit and I think they’re beautiful and I like hair styling so it all kind of goes together.” She enjoys watching old movies at home and practicing the hairstyles on her mannequin.

For her, hair styling is creative, and she knows that people enjoy having their hair combed and styled. “And everyday is different,” she says. “I really get attached to my clients. I had someone in here last week that I had been doing their hair for 25 years. He had dark hair when I started and now his hair is snowy white.” She appreciates that this job lets her be a part of the transitions of people’s lives while helping them feel and look good. “I’ll do it until I can’t do it anymore,” she says. 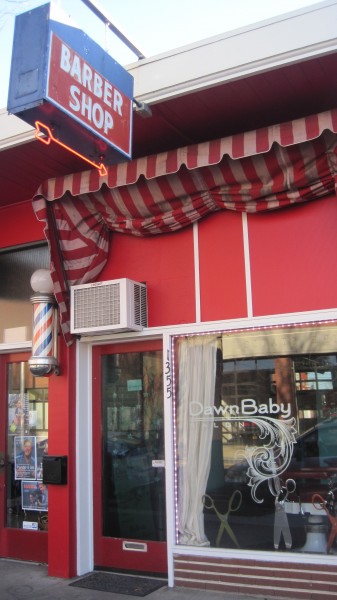 The building that houses Dawn Baby Salon was formerly Johnny’s Barber Shop. That spot has been a barber shop for 85 years, as long as the building’s been existence. Photo by Vanessa Salvia