By Vanessa on April 7, 2015 in Food, Lane Monthly, Restaurants 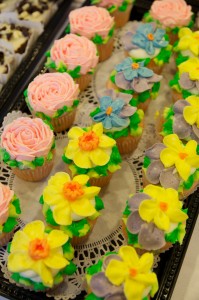 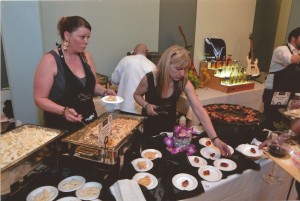 The Mac’s at the Vets team serves small bites at a past Chefs Night Out. Photo courtesy of Pat McCallum. 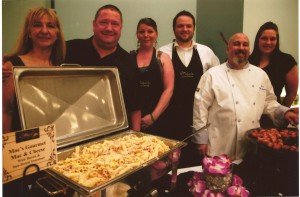 The Wild Duck team is ready for service at Chef’s Night Out. Photo courtesy of FOOD for Lane County. 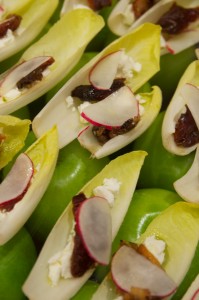 There is no single solution to hunger in Lane County, but FOOD for Lane County’s annual event Chef’s Night Out aims to take a big bite out of the problem.

Each April, Eugene’s Hult Center is transformed into a venue for more than 50 restaurants, caterers, microbreweries, distilleries and wineries to set up temporary booths serving drinks, small plates or bite-size helpings of food. Attendees purchase a ticket for admission and are then free to wander the Hult Center, from the upper mezzanine to the lower level, helping themselves to as much food and drink as they wish. This year marks the 25th anniversary of the event.

Tickets cost $75 or $90 for early entry, which allows attendees to get a head start on sampling. The participating food and beverage providers donate their time and the items they serve. “Because we have such generous sponsors, we’re able to keep 100 percent of the ticket sales to directly meet the needs of people who are hungry in our community,” says Dawn Marie Woodward, FOOD for Lane County’s events and media relations coordinator.

The event got its start when well-known restaurateur Mike West wanted to do something about hunger. Early on, West and his brothers, Jim and Phil, owned West Bros. BBQ. They opened Mona Lizza Ristorante in an adjoining space. They moved on to three Mucho Gusto Mexican Kitchens and Fina Taqueria. The other Wests becams known for Dickie Jo’s Burgers, and Dickie Yo’s ice cream and yogurt shop. They also opened Bill and Tim’s Barbecue on 13th and Pearl streets. Mike West died unexpectedly in 2011, and Jim passed in 2014.

“Mike West started Chef’s Night Out when he decided to hold the first dinner 25 years ago in 1991,” says Woodward. “He was co-owner of Cafe Zenon at the time and decided to host a dinner one weekend inviting his friends and people from the community and the proceeds went to hunger relief.” It grew so quickly that in the third year he moved it to the Hult Center. Twenty restaurants hosted that event with 250 people attending. “Now we have 50 or 60 restaurants participating and almost 1,000 people attend.”

The event is a significant portion of FOOD for Lane County’s annual budget. “Over the years, Chef’s Night Out has raised $1.5 million for hunger relief, which is the equivalent of 4.5 million meals,” says Woodward. If Chef’s Night Out sells out, which it regularly does, it brings in $80,000, or the equivalent of 240,000 meals. While that seems like a lot, FOOD for Lane County provides about 6.7 million meals a year—that’s how great the need is in our community.

It seems hard to believe that hunger would be such a problem in an area of the country with so many gardens, farms and orchards supporting local food. And that’s partly why the area’s chefs are so committed to helping with this event.

Ed King, CEO and co-founder of King Estate winery, supports Chef’s Night Out as Title Sponsor. Since 2011, King Estate has also been the Wine & Dinner Sponsor for FOOD for Lane County’s Empty Bowls Dinner & Auction in the fall. Prior to the sponsorship, King Estate provided the wine for the event.

King served on the FFLC Board from 2004 to 2007 and has been involved in various ways over a 20-year period. His estate’s gardens have provided the food bank with potatoes, and they regularly donate fruit. “Beneficiaries of these meals actually include a large number of children, elders and disabled,” he says. “I would argue that part of the measure of a society is the equitable treatment of those who are least able to fend for themselves, in a non-judgmental environment.”

King supports FOOD for Lane County in part also because they are efficient in delivering a lot of help per dollar received, thanks to an army of volunteers. “It’s an efficient, non-governmental entity which really represents our community taking direct action to take care of community members who indicate they have need,” he says.

The food and beverage providers who participate all know that they are tackling hunger in our community, and they feel strongly about the subject. Of course, Chef’s Night Out is a lot of work for the participants, but it’s also fun. And because they get to interact directly with 1,000 or more attendees, it’s a great way to showcase their menus. The participants compete for awards and bragging rights, such as Best Vegetarian Bite, Best Savory Bite, Best Sweet Bite and Best Presentation & Hospitality Award. The name of the overall Best Bite Award was changed to the Mike West Best Overall Bite award in honor of his passing and the commitments he made to fighting hunger. “This year his family is also contributing to a $2,000 culinary award for a Lane Community College Culinary Arts student because they believe it is important to support the chefs of the future,” says Woodward.

LANE COMMUNITY COLLEGE
“We’ve been doing Chef’s Night Out for over 10 years now and the last six years we’ve won awards and the students get so excited,” says Lisa Benson Aherin, and instructor in the Culinary Arts & Hospitality Management program at LCC. “For them to work so hard and to get that recognition has been a highlight.”

Lane Community College excels at presentation. They’ve won Best Sweet Bite in 2012 and Best Presentation & Hospitality in ’09, ’11 and ’14. “Our theme for 2014 was “The Science of Food” where we focused on molecular gastronomy,” says Benson Aherin. “The students wore lab coats and we had decorations of beakers and flasks. We had three food offerings, a pork belly sous vide with a smoked hay BBQ sauce, a deconstructed gin and tonic infused with elderflower liquor—the gin and tonic was actually spherical and popped in your mouth—and orange “creamsicles” made with liquid nitrogen.”

There are up to 100 culinary arts students and up to 50 hospitality students enrolled at LCC. “Many of our students come from humble beginnings and weren’t really exposed to food or going out to eat, so giving them the chance to develop their palate and their culinary sense of the world but also giving back to the community from which they came definitely feels like a full circle experience,” says Benson Aherin. The students get to talk to the public, meet other chefs and potentially network for a job. “It’s a well-rounded experience for everyone,” she says. “As a chef myself it’s super fun to get to hang out with our peers, but for the students, we want them to have the opportunity to roam around and see what everybody else is doing to get inspired because this is their future career.”

Culinary Arts and Hospitality Management Program students test their curriculum in the Renaissance Room, with full service menu that changes seasonally and to support the focus of study.
www.lanecc.edu/culinary/renaissance-room

CORNUCOPIA
“Chef’s Night Out is a great event! We love it because it does several things,” says Eryn Derderian, Cornucopia’s catering sales manager. “It’s unfortunate that we have so much abundant food growing here but there’s still so much hunger, so that’s one of the things we as a company really love about it. It’s such a great opportunity to get the word out and help feed people.”

Cornucopia focuses their catering menu on what’s local and abundant, sustainable and organic. “I’ve been in catering 20 years now and we have some of the best food available locally of anywhere, so we focus on menus that really represent what’s great around here, which is cheese and vegetables and fruits.”

Chef’s Night Out is a good marketing opportunity, particularly for caterers, with 1,000 plus people sampling their offerings. “But it’s also a fun event for us to go mingle with other restaurant owners and food people in town,” Derderian says. “I think the general consensus is it’s a fun night. Catering is a hard job and this is a night when everybody gets to just enjoy each others’ food and company.”

Koho Bistro has participated in Chef’s Night Out each year since opening. “Jeff and I are both active in the community and participating on different boards and advisories,” says Chan. “FOOD For Lane County is a very important one. I use to volunteer there prior to opening Koho and we wanted to continue to help such an amazing organization. Plus, Chef’s Night Out is not only for a good cause it’s also so much fun. It’s nice for Jeff to get to see people enjoy his food because he is always in the kitchen. It’s a privilege to be able to take part in one of the largest events that helps benefits the needy.”

This year Chef Strom will prepare two bites. One will be a Cattail Creek lamb neck roulade with wild stinging nettles, heirloom freekeh (a grain) and umami steak sauce. For a sweeter bite, they will offer a vegetarian black garlic panna cotta with honey lemon crumble.

“Nobody should go hungry,” says Chan. “My dad grew up very poor in China and there was never enough food for everyone. Even to this day when our relatives get together, the first thing that’s asked is, ‘Have you eaten?’ Food brings people together, it’s one of our basic needs.”

MAC’S RESTAURANT AND NIGHTCLUB
Pat McCallum has participated in Chef’s Night Out since the first event 25 years ago with The Treehouse, a restaurant he owned from 1977 to 1997. In February of 1996 he helped opened the Wild Duck Brewery. He and his brother opened Mac’s Restaurant and Nightclub and catering in 2002.

“It’s a great event and of course there’s no greater need than helping folks who aren’t getting enough to eat,” says McCallum. “As people that feed people for a living it’s a natural for us to support FOOD for Lane County and their efforts to help eradicate hunger here in our community.

Mac’s hasn’t completely decided on their menu for this year, but they will for sure serve Reuben sliders. “We make a killer Reuben sandwich,” he says. “It’s piled high with corned beef, of course. It has sauerkraut and Swiss cheese but it also has bacon on it and a nice stone-ground horseradish mustard sauce.” McCallum says their gourmet mac and cheese from past years is so popular that they may serve that again. “We make it with gorgonzola, jack and parmesan,” he says, “and I’m telling you it is one of the best you’ll ever have.”

Events like this do offer valuable exposure to restaurants and other service providers such as caterers, and McCallum says he has “definitely” had people come into the restaurant as a result of them tasting their food at Chef’s Night Out, but there’s a fair amount of cost that goes into participating. Each restaurant will serve more than 1,000 samples of each item they choose to prepare, and they pay for that, as well as the staffing for their booth and any decorations or serviceware. “Yeah, it comes with a cost,” says McCallum. “But that cost is offset by the knowledge that we’re assisting people who aren’t getting enough food. It’s such a basic need that we really feel strongly about participating. It’s to help feed hungry people. I mean, that’s the bottom line.”