By Vanessa on March 4, 2015 in Boomer and Senior News, People Profiles, Retirement, Seniors

Written for the March 2014 edition of Boomer and Senior News.

Giving back to the community keeps her going. 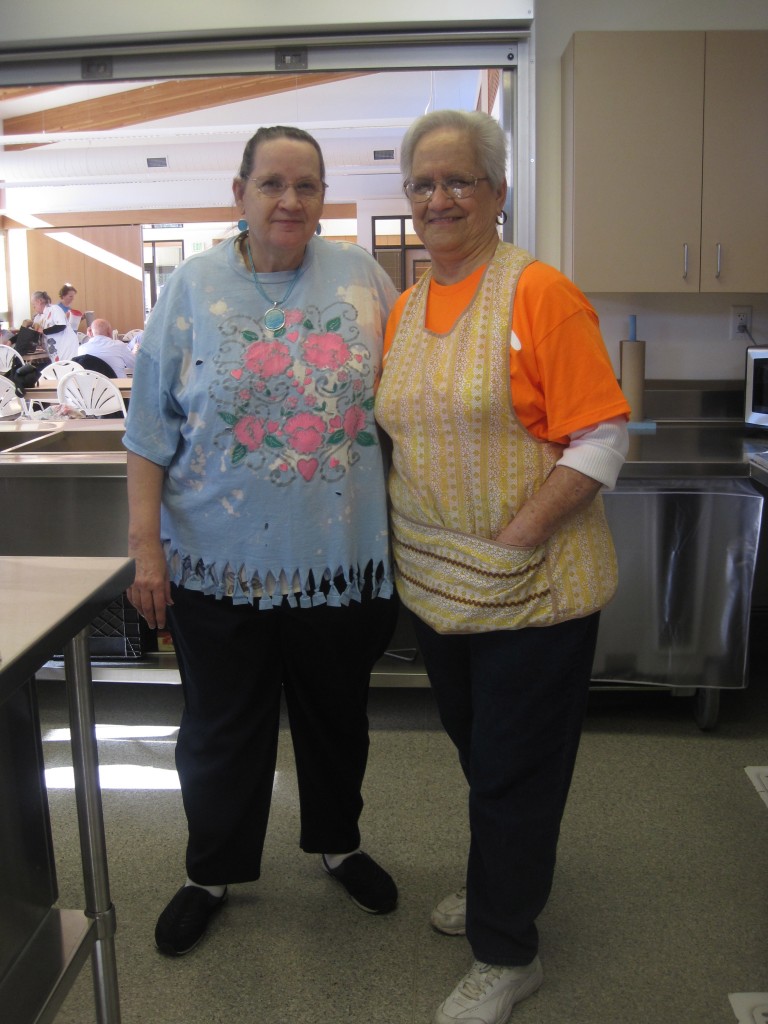 Anne James stands with Nina Pew, 82, at right. Pew has been volunteering for the meals program for six years. Photo by Vanessa Salvia

It’s nearly 11:30 in the morning at the Veneta Senior Center. The tables in the dining room are nearly full, and the bingo caller has just called out “B-65.” Anne James is bustling around, checking paperwork with other helpers, making sure that the coffee is full and that each person has silverware.

James, 67, is the director of the Veneta Senior Meals program. Three days a week James coordinates a team of volunteers to prepare meals for the Café 60 dining room and the Meals On Wheels program. “I have 20 volunteers in the kitchen and dining room,” says James. “It’s a program that absolutely would not be able to function without volunteers. They are the backbone of the program.”

Veneta Senior Meals is one of several programs being housed in the new Fern Ridge Service Center. On Mondays, Wednesdays and Fridays the dining room serves meals to anyone over the age of 60, at no cost and regardless of income. James’s mother was a manager for the senior meals program in Crow and would often enlist James to help wash dishes. “She would say, ‘You’re not doing anything and I need someone to wash dishes so come with me,’” recalls James. James started working with the senior meals program in 1978, when she was hired as a substitute site manager, though she had been volunteering for the program for many years before that. “My parents were very involved in the community. I’d been washing dishes at the Grange since I could reach the counter, and so when you’re raised that way you’re just expected to give back,” she says. “It’s just what you do.”

Giving back to the community is not all this inspiring lady does. She and her husband, Eugene, have been married 50 years. She grew up in Crow and raised her family there until 30 years ago, when Eugene was injured and became disabled. James became his caregiver while also raising their two daughters, and the family moved to town to be closer to doctors. Eventually, James became manager of the senior meals programs in Crow, Lorane and Veneta and was working five days a week at that job and the evening shift, from 5 to 11 p.m., as a manager at Lok Yaun, a Chinese restaurant. She would work double shifts at Lok Yaun on Saturdays and Sundays. “I was the sole support of my family,” James says. “You just do what you have to do.”

James currently has an adult nephew, a retired cousin, and three homeless friends living with her, along with four cats and two dogs. Last October, James retired from Lok Yaun, but not because she wanted to. Her knees and hips could no longer take the constant walking. “My body just won’t do it anymore,” she says. “Otherwise I would still be at the restaurant. I loved it.”

At the age of 39, James wrote a letter to herself about lessons that she had learned from working with seniors. One of the things she wrote down was to not assume that your family is “psychic.” “If you’re out of bread, tell them that you’re out of bread.” Another thing she learned was that time will seem like it goes by faster as you get older. “The days drag but the years fly by,” she says. Another piece of advice was that her body will give out before her brain does, and she won’t be physically able to do all the things she wants to do. “I thought by the time I got to this age I would know all the tricks about getting old, because I’ve seen it all and believe me I’ve seen it all,” she says. “But it still surprises me that my body won’t do what I want.”

The three days a week that James is at the Veneta senior center keeps her motivated. “It’s really fulfilling,” she says. “You feel like maybe you made a difference in somebody’s life. I really feel it’s my niche.” The dining room serves at least 30 people each day, and Meals on Wheels serves about 15 people. James says one of the most rewarding things is seeing people open up to new friendships. “I’ve had seniors come into the meal site and weren’t really sure why they were there,” she says. “Maybe their daughter or granddaughter told them they needed to get out more. And all of a sudden they’re having conversations with someone who understands them, that understand what they’re going through and what they’re trying to say,” she says. “Then pretty soon they’re just talking away to everybody. It really makes the difference and they just bloom.”

Greg Cunningham, 31, has been bringing his grandmother, Georgene Doyle, 73, to the meal site three times a week since summer of 2013. “I like meeting new people here,” says Doyle. “It’s nice to visit and then to see people around town that you know. It’s good.” Doyle often sits with Kathy McClemons, 70, who also helps out in the kitchen. The relationship between McClemons and Doyle goes back decades. Doyle was a teacher with Head Start, and knew McClemons’ daughter as a 5-year-old child. “I like the people,” says McClemon, about why she volunteers and eats here herself. “Most all of these senior citizens are awesome people.”

And, it doesn’t hurt that James is “very persuasive” about getting people to volunteer, laughs McClemons. Nina Pew, 82, has spent six years volunteering for the program. Michele Thorn, 59, just began volunteering two months ago. Thorn found herself unemployed recently and needed something to do. “I would have gone crazy not doing anything,” Thorn says. “This center is only seven blocks from my house, and it’s a great crew.”

Though James manages the kitchen, she says she’s not a good cook herself. “I don’t profess to be a cook but I have wonderful cooks here. Sometimes I’m allowed to open the cans,” she jokes. But getting more serious, she says, “My skills are people skills not domestic skills.”

If James had a chance to go to college and study what she wanted to rather than jumping headfirst into the working world, she believes that she would have studied geriatrics. “If I was 20 years old and know what I know now, I would have done this kind of work anyway. I love working with seniors,” she says. “They’re very real, no pretense. They figure they’ve lived this long they can tell you how it is.”

She’s had people over the years ask her why she’s not “higher up the ladder.” She replies that she’s exactly where she wants to be. “I don’t want an office job,” James says. “I want to be working right with the people.”

In May 2013, James was a recipient of the “Embracing Life” award given by the Age Knows No Limits Project of Lane Council of Governments. “I know people that are 50 that you would swear are 100 and I know people that are 90 that you think would be 50,” James notes. “Age has no bearing on attitude or ability. Sometimes the body goes out before the mind does but that’s doesn’t slow these people down.”

Bets Cole In Her Studio
Bill Kievith, Award-Winning Volunteer and employee at 75