This article appeared in the December 2017 issue of 1859 Oregon’s Magazine. Read the article on 1859’s website. 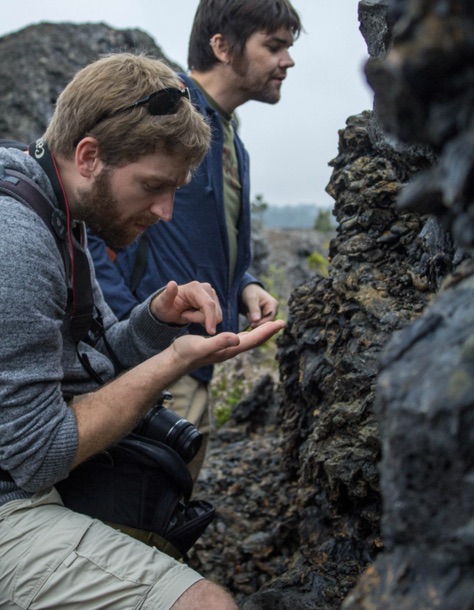 University of Oregon Volcanologist Thomas Giachetti Takes Us Inside an Eruption

For University of Oregon volcanologist Thomas Giachetti, studying volcanoes is his dream job—a dream he’s held since he was 12 years old and watched a documentary on volcanologists in his native France. While he doesn’t get to perch on the edge of active volcanoes as much as his predecessors from decades ago, he gets close enough to realize how cool an eruption can be, and how much there is still to learn—especially in our volatile Pacific Northwest.

You’re studying magma degassing during volcanic eruptions. What does that mean?
A volcano is similar to a soda bottle. You can’t see any gas bubbles in the soda bottle until you open it, which releases the pressure. If the pressure release is relatively slow the eruption may be gentle enough that you could get close to it and be fine.
If the pressure releases too fast, the magma could explode in a Mount St. Helens-type eruption, for example. I’m currently looking at both the last eruption of Newberry Volcano in Oregon and that of Medicine Lake Volcano in California because they are very similar. Both experienced a transition from explosive to effusive eruption, and I’m trying to figure out how you can tell what type of eruption you’re going to get from the deposits they produced.

How doe your work intersect with the Pacific Northwest’s increased risk for seismic activity?
Because the Juan de Fuca Plate is going under the North American Plate, that creates a lot of seismic and volcanic activity. You better know if an eruption will be gentle enough that you can watch it with your cameras or if it will it be big enough to shut down all aviation.

How do you get your data?
I first read what my colleagues have published. Then I take my shovels, pickaxe, hammer, GPS and camera to the field. I collect pounds and pounds of pumice and obsidian rock that I bring back to the laboratory. What most people don’t realize is that most of the time pumice and obsidian are exactly the same type of rock, except one erupted really explosively and the other one erupted effusively, like a lava flow.

Are there any truly predictive events prior to an eruption?
Not really. You might be able to say a few weeks or a few months in advance that something was going on. Most of the time you wouldn’t actually see anything, but the monitoring instruments would detect something.

What’s next for volcanology?
At the University of Oregon, Gwen and Chuck Lillis have committed $10 million to create the volcanic cluster, meaning we will hire more volcanologists and Eugene will be the place to be in the U.S. to study volcanoes. That is a game changer and is really exciting.