By Vanessa on June 23, 2018 in Eugene Magazine, Science and Technology 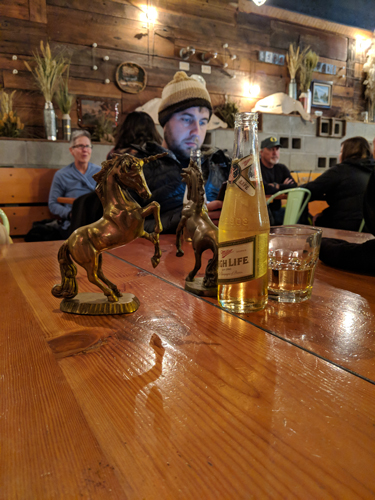 The golden unicorn is the official mascot and symbol of Eugene’s tech community that meets weekly at the Barn Light. (Photo by Vanessa Salvia)

To most people, the tech industry in Eugene isn’t very noticeable. The large companies, such as CBT Nuggets (online video training), IDX Broker (real estate technology), Concentric Sky (web and mobile apps), and Palo Alto Software (business planning software), among others, do have a known presence. But more often, tech in Eugene means unassuming, small offices of two to 10 people. Though easily overlooked, the tech industry has been here for quite some time, and it’s finally growing to the point when it can’t be ignored.

Software publishers provided 10,000 Oregon jobs and sales of $4.4 billion in 2015, according to a Technology Association of Oregon-commissioned report. In November 2014, the Lane County Sector Strategy Team convened for the first time to gather data about our highest growing job sectors—food and beverage, wood products, and technology. Until then, tech leaders had no seat at the county table. Now, there’s an agenda to help that infrastructure grow.

Joe Maruschak, a computer game developer who moved here in 1993 from New Jersey, began leading the state-funded Regional Accelerator and Innovation Network (RAIN) in 2014. Through RAIN, businesses can quickly and easily access the three vital components of growth: capital, infrastructure, and workforce. “We work to make sure that all these components are here in abundance, and, where they do exist, we created a pipeline,” he explains. “We want to make it really easy to start and grow companies here.”

Eugene’s tech industry is fueled partly by the many people who succeeded in tech’s early days and who then went on to form their own companies. Many of them chose to either relocate to Eugene or stay in Eugene because they didn’t want to live anywhere else.

Tom Keating, CEO and co-founder of Cognitopia, maker of apps to help people with cognitive disabilities, moved to Eugene from New Jersey in the ’70s and has been in the tech world since the mid-’90s. “I think one of the reason Eugene’s been a nest of R&D is because people like the community and the culture and the proximity to the outdoors,” he explains. “The quality of life is a big factor.”

One of Eugene’s gifts to the tech world is the ability to spend less time in your car getting from one place to another like you do in larger metropolises. “And the craft beer!” jokes Julie Henning, Cognitopia’s marketing manager. Eugene has fiber internet, skilled workers, jobs for those workers, less traffic, cheaper rents, more farmers markets, and better beer—who wouldn’t take that deal?

Steve and Michele Zimba, both from New York, launched Nulia in Eugene in August 2017. Nulia helps businesses close the gap between the adoption and use of Cloud software. The Zimbas’ children, both now attending the University of Oregon, introduced them to the town. “As we saw the bubble-up of fiber and the Technology Association of Oregon being here and the impact of the city itself supporting the tech community, it seemed like a good fit,” Michele says. “It’s always easier to start where there’s an educated workforce and a slightly lower cost.”

Henning says she hears grumblings about how much the cost of living here has grown over the past five years. She’s right: home rental costs have doubled and commercial rates have risen rapidly. Does Eugene’s future look similar to what our tech workers are trying so hard to escape from? Maybe, but not if the tech industry can help it.

“Now it’s about the community coming together to make the choices to be what we want to be, to not be Portland, to not be Seattle,” says Maruschak. “There’s a reason people live in Eugene, and the people that moved here don’t want this to become one of the places they moved away from, so the tech community has to be a solution to those problems. That’s our big challenge—to make sure we truly have the resources for people to succeed and not screw it up in the process.”

Gigabit-speed fiber internet is up to 250 times the speed of average internet connections— that’s a game-changer for tech and a building block for the future. The nonprofit Mozilla Foundation, which works for an accessible, open internet, named Eugene a Gigabit City in March 2017. The designation brought $83,000 worth of grants and, in coming months, other local organizations will split $75,000 more. The awardees have four months to use their grants.

“We are a community improvement program,” says Craig Wiroll, a Mozilla manager and a resident of Eugene. “We want the grants to push the boundaries and make people curious about the limitations of high-speed internet and emerging technology.”

Lauren Jerome, founder of Mindbox and Redefining Women in Tech, received a $12,000 grant. Her group is creating interactive video learning events. “We are piloting an event program that will help break down location barriers for people that want to collaborate on learning,” she says. “It’s like live-streaming ‘plus.’ Instead of one location broadcasting and the other location just watching, it’s a more participatory format where we’re asking the audience to participate through digital tools.”

In November 2017, US Ignite, a National Science Foundation program, chose Eugene as a Smart Gigabit City. Wiroll says that designation was made partly because Eugene was already a Mozilla Gigabit City but also because Eugene had some fiber internet downtown with plans to install more. “Fiber’s around, but it’s being underutilized,” says Wiroll.

One of the most visible places to find tech industry people is at Tech Tuesday at The Barn Light cafe and bar in downtown Eugene. Look for the golden unicorn, the unofficial mascot of the tech groups that meet regularly. Mark Davis helps manage CodeChops, a co-working space catering to the tech industry. CodeChops opened up six years ago in the Broadway Commerce Building, above The Barn Light.

“The Barn Light has been ground zero,” Davis says. Each week, Davis’ team live-streams to Facebook, recapping the week in local tech. Davis is also the “developer evangelist” at CBT Nuggets, where he’s on the app team. For the past 10 years, he’s split his time between Eugene and Portland

“Before downtown got revitalized, there was no epicenter for tech folks,” he says. “They might have meetups, but it was in so-and-so’s basement. Now we have a centralized location downtown for tech folks to meet, and that’s where you get your innovation because people are bumping into each other.”

Michael Jones got into game music and sound design after a post–high school realization that creating audio for games was an actual career. He moved here from Washington in 2008 to work for Pipeworks, a studio making games for PlayStation, Nintendo, and other platforms. Wanting to see more job prospects in this area, he sought to build connections between Eugene’s game and tech communities.

In 2015, Jones established a Eugene chapter of the International Game Developers Association. Through his group, BitForest, Jones promotes meetups and events, such as weekend game development jams. “We wanted to turn the groups that were already here into a community that thrived,” Jones says. “We want to do outreach to schools so the younger generation knows if you want to get into games, you don’t have to look to Los Angeles for it.”

A successful industry means that people have another job to go to if they leave their old one, and many of the successful tech companies know that the skills brought by game developers aren’t just for use on toys.

The next five years

Eugene will host the Track and Field World Championships in 2021. Future projects Davis is working on will focus on ways to make Eugene more discoverable. “Wayfinding apps for visitors,” he says, “ridesharing for people to get around, apps to help people find coffee shops, or homeless people find resources.”

“Eugene has such a strong sense of collaboration and community pride of working together,” Jerome says. “Tech has an opportunity because there’s so much crossover to help those other industries come along with this evolution. I’d like to see our community help us approach the industrial revolution in a way that’s sustainable to Eugene.”