By Vanessa on December 15, 2014 in Food, Register-Guard, Restaurants

The Register-Guard publishes a special business section twice annually that focuses on businesses in the Coburg Road and Oakway Center area of Eugene. For the December 2014 issue I contributed three articles, this one about a new restaurant called The Kozy, one about Mirage Hair Systems, a salon that offers hair replacement therapy, one about personal trainer center Ultimate Fitness. 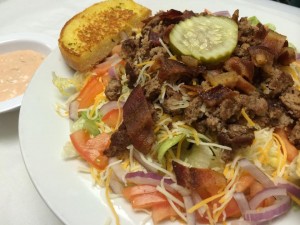 The Kozy owner Linda Grover has three things she wants highlighted about the new restaurant that opened in the former Wild Duck Brewery space on Coburg Road. The first is that it’s not a chain. The second is that their loyal staff is the biggest part of their success. And the third is that Eugene is a good place for her 28-year-old son, Luke, who is managing the new Eugene restaurant. He’s also single. “Put that in big letters, single,” jokes Linda.

Luke rolls his eyes and sighs, like any son would who has heard that line before. Linda, her husband David, Luke, and her other children, Angela, Katie and Nicki, are a close family, and that’s partly due to their restaurant work.

The Grovers own five other restaurants along the Oregon Coast. Katie, 25, runs Shake N Burger in Coos Bay. The others are Kozy Kitchens in North Bend, which they bought 14 years ago, Coos Bay, Myrtle Point and Florence, which they bought 4 years ago. “Luke ran that one for 4 years before he was ready to have his own,” says Linda. “We are a family run restaurant. The kids all run one or work at one or go to all of them to work, wherever they’re needed. My mother’s 80 and she’ll go in and bus once in a while if we need her to.”

Linda laughs a lot and clearly enjoys the camaraderie with customers. “The reason this one is called The Kozy is because everybody refers to The Kozy Kitchen in North Bend as The Kozy,” she says. “It’s always like, ‘let’s meet at The Kozy.’ We have a lot of tourists on the coast, but it’s our locals that keep us in business.”

The Eugene restaurant is also their largest location, with a 50-person banquet room and tables to seat 180. They employ 30 people and opened July 7.

Meals at the Kozy are hearty and homestyle, along the lines of Marie Callender’s or Denny’s, with full breakfasts served all day. There’s no skimping on flavor or portion size, and prices are reasonable. For instance, the Ultimate Chicken Fried Steak Platter comes with the country gravy-smothered steak on its own plate, because there’s no room for the two eggs, hash browns and French toast that also comes with it, all for only $9.95. “You get a lot of food at a good price,” says Linda. “Instead of getting you in here once a month for an anniversary we want you to be able to come in all the time.”

The Grovers lived in Roseburg for many years, before moving to Denver. While there, Linda catered meals for the Denver Broncos, while David was Vice President of Ingram Book Company, a demanding career that kept him from his family. After a neighbor was diagnosed with cancer and died suddenly, the Grovers began rethinking their lifestyle. “We thought, ‘Our someday may never come,’” recalls Linda. “We put our house up for sale that day, gave our notices and bought The Kozy Kitchen site unseen over the Internet.”

Luke was 14 at the time. “I’m an easy-going person,” says Luke. “So I said, ‘let’s do it.’” Luke worked at the original Kozy Kitchen, and at first wasn’t sure the restaurant industry was right for him. “But then when I got older I realized it was exactly what I wanted to do,” he says.

Despite a rough opening when they didn’t have air conditioning for three weeks and lost customers because of it, they are already becoming the neighborhood spot with repeat business. “At the Florence location, it got to the point where I knew the customers so well that I would have their order ready before they even walked in the door,” says Luke. “It’ll happen that way here too.”