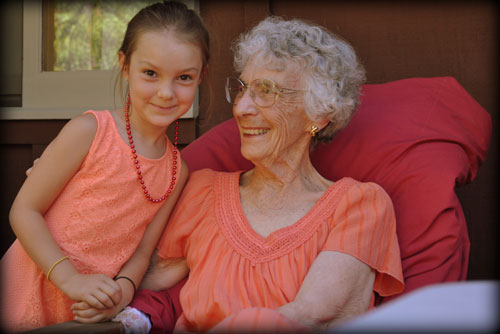 The Joy of Becoming A Grandparent

When your children have children, you’re no longer “just” a parent.

According to “60 Minutes” journalist Leslie Stahl, the crowning achievement of her life wasn’t her four decades of reporting, covering news from the White House or interviewing heads of state. It was becoming a grandmother. She put her investigative journalist skills to use on a book she published in 2016 called Becoming Grandma: The Joys and Science of the New Grandparenting.

In that book she writes, “Becoming a grandmother turns the page. Line by line you are rewritten. You are tilted off your old center, spun onto new turf. There’s a faint scent of déjà vu from when you raised your own children, but this place feels freer. Here you rediscover fun and laughing, and reach a depth of pure loving you have never felt before.”

In Eugene, Minalee Saks recently turned 70. In 1978, after she became a parent, Saks co-founded a group called Birth to Three which connected new parents with other new parents so they could learn about childrearing and build a support system with other parents of same-aged children.

“I think becoming a grandparent is one of the most profound experiences you can have,” she says. “It’s not the same degree of profoundness as having a baby, but it changes your life forever. It’s such a joyful experience and it helps you look at your own child in such a very different way.”

When Saks became a new mother, her husband maintained his work life but she was home alone and isolated. And, she had “a million questions” about parenting and no one to ask. She was invited to be part of an infant temperament study, and through that group discovered that the other parents felt the same way. The two infant temperament researchers and herself formed Birth To Three and started offering support groups and classes for parents. In 2012 after Saks retired, Birth to Three became known as Parenting Now.

Birth To Three became Saks’s life work. She spent 35 years as the group’s executive director, and oversaw more than 100,000 parents through the programs. Her curriculum has been used in trainings in Romania, Ukraine and India.

If parenting came with few road maps, becoming a grandparent comes with even less. Now that Saks is a grandparent herself, after having two sons, she has started leading workshops for grandparents called The Joy of Grandparenting along with fellow grandparent and psychologist Kris Hallenburg. Saks has three grandchildren, an 11-year-old grandson, and granddaughters aged 8 and 3.

“What we’re doing now is helping grandparents understand that changed relationship with your adult children that can be so enriching and joyful for the parent,” Saks says. “When your children have children you’re not the parent of the child, you’re the grandparent, and it does really change your relationship.”

Willie McEachern and his wife Monika are parents to three children, aged 33, 31 and 29, Tyler, Keegan and Carson. They have six grandchildren aged 13, 8, 7 and 3, along with 6-year-old twins. One of the biggest changes can be accepting that the parents are in charge of the decision-making.

“You have to watch how your children raise their children and it’s sometimes not what you would do or what you think you would have done in that situation,” Willie says. “But Monika and I both sit back and say, ‘OK, this is their thing to deal with and we don’t want to get in the way.’ So it’s a little bit of holding your tongue.”

The McEacherns see their youngest grandson, 3-year-old Milo, every day, because his parents live with them. The different parenting styles is the biggest challenge. “Everybody has their own way of parenting,” Monika says. “When I had my first child I sat down with my mom and my mother-in-law and I said, ‘I know you are full of advice but will you let me try it my way and if I need advice I’ll ask.’ They were very good about that.”

As parents have to set the rules for their home, grandparents set their own rules too, and the grandkids will adjust. “When we have the kids they know what to expect from us,” Monika says. “They’re very adaptable and they don’t talk back to us when we say no because they know that really is, ‘No.’”

Because Milo lives with them, Monika says it’s almost like having another child but with less responsibility. “I love watching my kids be parents,” she says. “I think that’s very fun. My oldest son every once in a while will call me and he’ll say, ‘I’m so sorry for everything!’ when he’s had a difficult time with his kids, so I appreciate that.”

For Willie, when little Milo asks to play or comes up and sits in your lap, it’s all worth it. “It melts your heart,” he says.

“After Michael (the grandson) got a little older she asked for some advice but I tried not to stick my nose into my childrens’ affairs, you know,” Nordquist recalls. “But it was fun. We did a lot of going to parks and visiting ourselves more than we were able to do when she was a younger person. We became closer even. During the time we shared as a young mother and grandmother we probably became closer than we were than when she was living at home because, you know, teenagers don’t like to talk to their parents much.”

Minalee Saks’ grandparenting workshops cover different topics and are held every few months at the Eugene office of Parenting Now. One topic they regularly cover is called Creating Your Grandparent Legacy.

“It’s really about helping grandparents to be thoughtful about what is it that we want to pass on to our grandchildren, traditions, values, what kind of family history, skills, memories,” she says. “It really can enrich that experience of being a grandparent.”

“There’s a lot of pleasure and joy in being with your grandchildren but you can also be thoughtful about the kinds of things you want to do to build that relationship,” Saks explains. “It could be as simple as having little traditions, things you cook or bake together, walks you take, interests you follow together.”

One wonderful thing about being a grandparent is that grandparents often have a lot more time than the parents do, so they can take that time to get to know and interact with their grandchildren.

Saks’s 11-year-old grandson is doing a year-long school project on fruit, so they go to the store together and by interesting looking fruits and look up recipes. The 8-year-old loves to read, so they talk about the books she’s reading and what she likes about them.

“It’s taking the time to know them,” she says. “Another joy of grandparenting is that it gives us a chance to be silly, to return to a playful part of ourselves. Singing, dancing, laughing at silly jokes, looking at bugs. It’s wonderful for both grandparents and the grandchildren.”

Of course, being a grandparent is not always joyful. If there’s a history of tension between a parent and their child or stress between their husband or wife, that causes problems and Saks’s workshops talk about this.

“I think because grandparents really have more to lose, it’s worth figuring out how to make it work,” she says. “Parents have so much stress in their lives, usually a lot more than we do because they’re balancing jobs and 24-7 with the kids and doctor appointments and activities and school. It’s tough being a parent and the more we can support them and the more we can respect them as adults the better we can get along.”

Many parents still think of their adult child as the person they were when they were younger, and many adult children may still sense that they’re being treated like children.

“We need to leave behind some of the old patterns and look at your adult children the way you would as an adult or a spouse,” explains Saks. “Not as children or your children. Giving them that respect is really important.”

Parenting itself has changed since the decades when grandparents were first parents. Saks urges grandparents today to educate themselves and be current on today’s childrearing practices. Some things have changed. For instance, grandparents were taught to put their babies to sleep on their stomachs and now it’s on their backs. All in all, it’s about being as respectful and supportive to your adult children as you would be to your friends.

“I think grandparenting can be the most satisfying and joyful thing that you can have beyond parenting,” Saks says. “Love, fun, joy, adventure, and it’s not nearly as exhausting as parenting. It’s a great bonus for this time of life.”

For the most up-to-date information about Parenting Now’s grandparenting workshops, email Minalee Saks.