I enjoyed contributing about farm and agriculture topics for In Good Tilth, the magazine of Oregon Tilth, an organic certification organization. This one appeared in the October 2016 issue. Read the article as it appeared on the website of Oregon Tilth.

How Farmers Can Close the Farm-to-Fork Gap

If farmers want to increase their base of consumers who value local, fresh, organic food, it pays for them to cultivate more than just the plants and animals on their fields.

Customers are challenged by too little money and time, not having culturally relevant foods and not knowing how to cook something that their families will eat. Anything you can do to offer solutions for these issues will help bridge the food-literacy gap in your community.

Challenges for shoppers
The farmers’ market can be intimidating for a variety of reasons. “At the grocery store, it’s easy to tell how much things cost and pretty much everything is recognizable,” says Cara Strickland, 28, a graduate student in Spokane, Washington. Although a food writer and restaurant critic, she describes herself as “not much of a cook.” Lately, though, she’s been on a quest to introduce more foods into her life and likes the idea of supporting local farmers, yet, “Farmers’ markets are intimidating because there are a lot of things I don’t recognize.”

Take, for instance, garlic scapes, candy cane beets or beets in general. In most grocery stores the beet greens are removed before they’re ever put on display. Strickland says she’s never seen garlic scapes in a grocery store, although she stumbled upon them in a farmers’ market recently.
“So I asked, ‘What are these and what do you do with them?’” She learned scapes can be cooked with eggs, so that made them seem accessible. “It was inexpensive enough and they made them sound good enough that it was worth the experimentation,” she says. 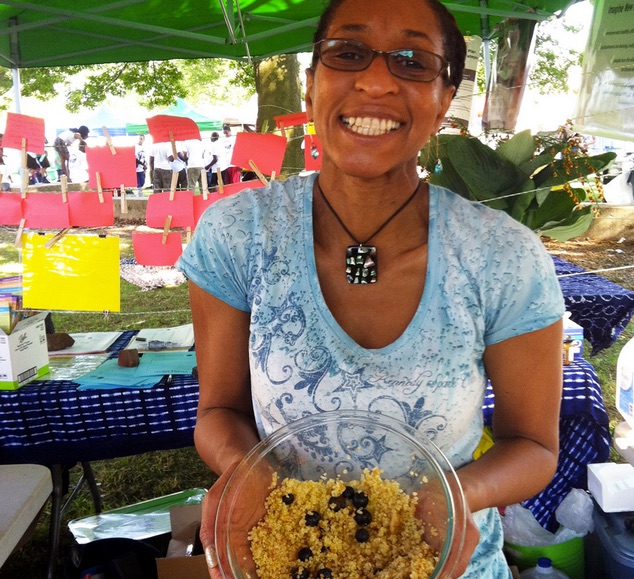 How farmers can change things
Some market staff can make visitors feel uncomfortably scrutinized. Strickland appreciates the market staff who are willing to open up conversations. “Don’t wait for me to say, ‘Hey, what is this?’” she says. “When you’re at a grocery store you just have to read a label, but at a market you have a chance to have interaction.” But if the price difference isn’t significant enough, and the staff isn’t friendly, going to a grocery store can seem like a more comfortable option.

Recipe cards & storage
Hand out recipe cards and storage tips at your market booth and train staff to offer cooking tips. Strickland recently spoke with a farmers’ market employee about buying beets with the greens attached, which was new to her. He told her that removing the greens would make them last longer. “Storing beets is certainly something I could Google,” she says. “But it’s intimidating to come home from the market and do 12 searches to figure it out.”

Offer smaller quantities
As a grad student, Strickland’s money is tight. She’s much more likely to buy one beet rather than four. “A lot of purchases are geared toward families and that’s not everybody’s story,” she says.

Take cards or tokens
Grocery stores count on impulse buys, so make it easy to pay. Many farmers’ markets accept credit or allow people to use plastic to buy tokens, which are then exchanged for food. Not knowing what you’re going to find at the market is part of the joy, but it’s also intimidating if you can’t pay for it.
“If I didn’t plan ahead and bring enough cash to the market, I might not feel like I can afford what I’ve picked out,” says Strickland. “It’s embarrassing to not have money and have to ask if they take credit, and then find out they don’t and you can’t purchase something from them.”

Take a community-focused view
For eight years, Tagan Engel held the position of community food-systems coordinator for CitySeed in New Haven, Connecticut, and was chair of the New Haven Food Policy Council. The two groups collaborate on their goals of promoting and supporting a local food system.

Engel worked as a chef before joining the council and has a personal interest in helping people learn to cook. “A lot of food knowledge has been lost for generations because people aren’t learning as much about food from their parents,” she says. The minimum wage hasn’t kept up with price increases, and packaged food has proliferated. “We had to start thinking about how we could help people learn to cook food that is nutritional and culturally relevant so it makes sense to them. Food that is affordable and is delicious, and doesn’t take too long to prepare.”

Those four things are the pillars of the organization’s food education. To achieve that, they offer farmers’ markets around the city and frequent cooking demonstrations. They also have a mobile market that drives to senior centers and housing projects in low-income areas. They offer cooking demonstrations at libraries and churches, and ran a program a few years ago training people in the community to go out and lead their own cooking classes.

One popular demonstration series was run in partnership with Global Local Gourmet using Leanne Brown’s free online cookbook,  Good and Cheap: Eat Well on $4 a Day. “People are hungry for information about how to make a bean burger or what to do with chard,” Engel says. “We definitely look at education as an important piece of the access issue, because just putting items in a farmers market doesn’t mean that people will know what to do with the food.”

Offer tastings
Engel says that tastings are a “super” way to reach potential customers. People want to know what a yellow tomato tastes like and whether the candy striped beets are different than red or golden beets.

“It could just mean that farmers chop up food and offer samples,” she says. “Sometimes we have volunteers come in and cook a recipe at the farmers’ market, and that gets people tasting stuff. We have all the supplies and the health permit and set up. It takes away that intimidation factor.”

Grow (and cook) for your demographic
New Haven has a large Caribbean-American population that is used to callaloo, a dish of stewed leafy greens traditionally made with amaranth, taro or water spinach — none of which are common in New Haven. To accommodate, CitySeed’s cooks explain how kale or chard can be used in the same way.

“What is the background of the people that are shopping?” Engel asks. “Try to grow things they want, but if you have something that is similar try to bridge that gap for them. Put up a sign saying, ‘If you like collards, try kale.’ Know your market and change what your products are or relate what you have to them.”

Open your farm to schools or visitors
CitySeed tries to teach kids about MyPlate, the new version of the food pyramid. Half of the plate is supposed to be fruits and vegetables, which is hard to achieve if people feel they must eat nothing but two fists of broccoli.

If you can show people that they can fill their plate by having roasted potatoes, cucumbers, a carrot salad, apple slices and berries, it seems more achievable. If you have time, welcome people onto your farm to learn more about what you grow and how to use it. Or take half a day and visit a couple of schools to bring samples of cherry tomatoes or apples. People who know what food tastes like and how to use it are much more likely to become customers.