By Vanessa on March 18, 2015 in Art and Artists, Business, Lane Monthly
This was the lead story in the first issue of the new publication Lane Monthly (LaneMonthly.com), which first published in February 2015. 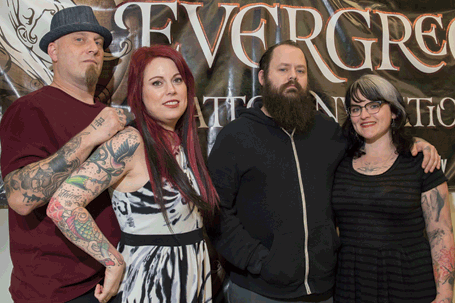 There’s a buzz surrounding the Evergreen Tattoo Invitational, and it’s not just the sound of tattoo needles. Last February’s inaugural convention brought tattoo artists from around the world to Springfield’s Willamalane Center for Sports and Recreation. This year a tattooist from California who wasn’t invited to the 2015 show tried to hack his way in. “He called the company that runs our website pretending to be one of us so he could get the password to log in and add his name to our database,” says Riley Smith, one of the show’s organizers. “He’s been trying to get into our show for nine months.”

Smith, Smith’s wife, Erin Rust, and Joshua Carlton and his wife, Nikki, have developed a tattoo expo and invitational that has quickly become a prestigious event. This influx of travelers spending cash brought a surge of revenue to Springfield over a 5-day period and compelled the tattoo world to notice what a handful of determined people can do.

Smith tattoos at Lifetime Tattoos in Springfield, where he grew up. Carlton, originally from Corvallis, tattoos at Crimson Torch Collective in Eugene. The idea for the convention started as a not-so-serious conversation. “We were talking about how Oregon has so much to offer,” says Carlton. “Then Riley went home and he and Erin put together a proposal and presented it to me and it was undeniable. So it went from, ‘That would be kind of cool’ to, ‘We’re doing it!’”

A lot of tattoo shows are open to anyone who pays for a booth, but at Evergreen artists exhibit by invitation only. It’s this pickiness that has given Evergreen its esteem. They invite only the best artists, not necessarily those that are the most well-known. “We want it to be like when you get that invitation it’s really something,” says Carlton. “We literally handpick the best artists from around the world.” And visitors don’t come just to get tattooed. Evergreen features educational seminars about artistic techniques, artwork displays, music and food. Last year, Butch Patrick, the original Eddie Munster, was in attendance. They also do have well-known names, such as Jason Clay Dunn, winner of Spike TV’s “Ink Master,” and Paul Booth, from New York, who Nikki describes as “like the Rolling Stones of tattoo.” “As a 24-year veteran tattoo artist, it’s all the things that I wish would happen when I go to conventions,” says Carlton.

There are no gaudy, carnival-like displays at Evergreen. “We’re focused more on the art side of it than the novelty,” says Rust. Of course, even the tattooless are welcome at the convention. But those with bare skin may find it hard not to stare at the hard-core tattoo collectors who have transformed their bodies into multicolored canvases for all manner of artwork. Carlton is widely known for his expertise in the art of realism, which features portraits, animals or even epic landscapes so detailed they can trick the eye into thinking they’re real. Tattoos are better now than they’ve ever been— more artistic and safer, because for the most part, they’re applied by serious, highly skilled body artists.

Carlton discovered tattooing when his 18-year-old sister got one. “The tattoo was terrible!” he laughs. “I was a 16-year-old kid and I thought, ‘I can do that.’ I started buying tattoo magazines and got involved but I never expected to be where I am today.” Carlton’s work is sought after, and he wrote the bestselling book on tattooing called Advanced Tattooing Techniques: A Guide to Realism.

He believes tattooing is enjoying a renaissance. People pay a lot of money for tattoos, and art by skilled tattooist is considered highly “collectible,” just like art on canvas. “Students of fine art are realizing that tattooing is a viable option for a career,” says Carlton. “Literally some of the best artists alive today are doing tattoos. That’s what the convention does, it shines a light on what tattoos can be.”

Lifetime Tattoos opened in 2008, just as the economy began to bottom out. Their business is on an upswing, and Smith sees this as not only an opportunity but a responsibility to invest in the community. “When the economy started coming back I thought, ‘There has to be some way to breath new life into this community because it’s got to come back,” Smith says. “The amount of commerce that we’re bringing to the area is exciting. The influx of cash that we generated staggered me when I saw it.”

When Smith told one of his tattooist friends about the plan for a convention, the friend said no one would come. Not to Springfield and especially not in February. But they did come. Last year artists from 30 states and five countries attended Evergreen and this year three additional states are represented. This equals substantial revenue for the Oregon health licensing board, which charges $70 for out-of-state licenses. Lisa Lawton, director of community relations at Travel Lane County, calculates an economic impact of $828,360 for the 2015 event, which is expected to be attended by nearly 5,000 people.

Outside Lifetime’s window on Main Street is a roughly 80-foot tall Douglas fir tree, a common site in our part of the world. But Smith says one artist from Santa Fe stood at that window just staring at the tree-covered butte in the distance and the “Christmas trees” lining the road. “We don’t think of that here,” says Smith. “He said, ‘It’s like Christmas everyday around here for you.’ That’s pretty unusual for a lot of the people that came here. Everybody fell in love with Oregon.”

Guaranty Chevrolet in Junction City and Latus Motors, a local Harley-Davidson dealership, are both big supporters of the tattoo convention. Guaranty will be shuttling exhibitors and attendees from the Holiday Inn and Holiday Inn Express hotels to the venue. Last year, the after parties were held at Hop Valley Brewing Company. The hotels were full, and Hop Valley was hopping. When tattoo artists finish their day’s work they don’t go home, says Smith. “They go out, and that money goes right back into our economy.”

Smith says he and Rust warned the hotels to be fully stocked for the weekend, and yet, one hotel ran out of beer and sent a cart over to Hop Valley to get a keg. “Oh yeah,” says Hop Valley general manager Cassia Sexton. “We were busy that weekend.” Hop Valley stayed open later than their normal weekend hours, and Sexton says as soon as the convention closed they filled up and stayed busy.

Dan Kuske, general manager at Latus Motors, knows a good partnership when he sees one. “Tattoos and Harley-Davidsons . . . they go together like PB and J,” he says with a laugh. “It’s kind of a no-brainer but it’s not just that, it’s the right culture. The impact for us at the festival was very positive. We sold some bikes that weekend. I’ve had people throughout the entire year come in and tell us, ‘Saw you at Evergreen,’ so it’s paying dividends.”

Some people browse the store and leave without buying anything, but they’ll mention they saw him at the tattoo fest. “That’s money well spent,” Kuske says, on building relationships with the community and making a connection to people, whether they make a purchase or not. “I can tell you I’ve spent money on other things and other events and not had one person walk in and say, ‘Hey, I saw you at . . . ‘” he says. “That’s why we didn’t hesitate to get involved again this year.”

Because of the event’s success, the venue, too, was cast in the spotlight. “There aren’t a lot of venues around here for events like this, but Willamalane was perfect,” says Carlton. “It was almost like it was designed for our show.”

The building’s 97,000 square feet has seminar space and private meeting rooms where photographers from big-name tattoo magazines could photograph work with nice backdrops. The teen facility, with couches and video game screens, was used as the VIP room. The venue even has a rock-climbing wall.

“It’s such a nice venue,” says Rust. “They were able to accommodate us and it went so well that other events came to them and said, ‘Hey, we didn’t know you could do this, we want to have our event there too!’”

All four of the organizers toiled for nearly a full year and all night setting up the venue before opening day of Evergreen last year. When they saw thousands of people walking around and the tattoo machines started to buzz, they could hardly believe what their hard work had turned into. Carlton says, “I’ve had people come up to me and say, ‘Now that I’ve done Evergreen, everything else is a little lackluster.’”