This was one of two articles I wrote for the Register-Guard’s first-ever special section on cannabis, called Cannabis Culture. It published April 19, 2017. Want to watch a short video of Ross Mills explaining what she does? The published article has a video. 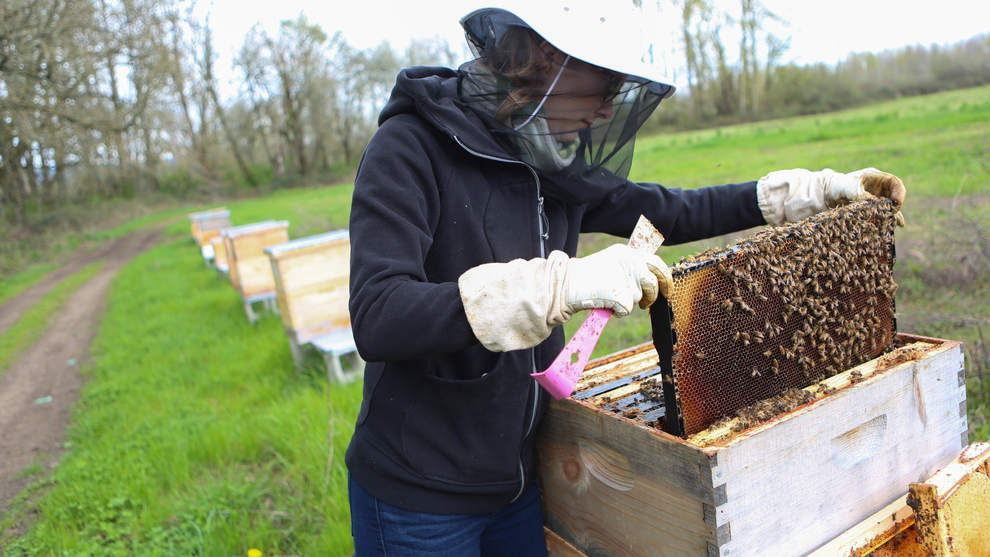 “Honey is a nourishing superfood and it is such a gift for mankind,” says Ross Mills of Echo Elecutary. “It seems so natural to infuse honey with cannabis.” (Kelly Lyon/The Register-Guard)

Sometimes, there’s no better language in which to say something than ancient Latin, and going back even further, ancient Greek. Take the word “electuary.” It’s actually from the Latin word “electuarium” and the ancient Greek “ekleikton,” meaning “medicine which is licked away.” Specifically, an electuary refers to medicinal herbs — and in this case, cannabis oil — mixed with honey. It also speaks to the ancient relationship that humans have with honey.

“Honey is a nourishing superfood and is such a gift for mankind,” says Ross Mills, the 27-year-old owner, along with her 28-year-old partner, Regan O’Reilly, of Echo Electuary in Eugene. “Humans have been seeking honey and beeswax since the dawn of time. It seems so natural to infuse honey with cannabis. Some people don’t want to taste the cannabis oil, so the delicious honey helps to make it palatable.”

Mills produces Willamette Valley honey thanks to her 25 beehives, soon to be expanded to 35. These hives are located on the grounds of Groundwork Organics. Mills combines this honey with cannabis and with medicinal herbs such as turmeric and ginger also grown on the farm.

“We always wanted to be stewards of land and we want to be a single-source, trusted company, so that means harvesting our own honey,” Mills says. “I consider working with the bees a sacred relationship.”

Mills and O’Reilly donate 3 percent of their company’s profits to bee causes.

Changes in regulations have been a setback. Previous testing for cannabis products required four categories of tests, costing $125 per test per product. Changes in 2016 require the testing of 60 samples per batch from three consecutive process lots per product at a cost of hundreds of dollars per test. For Echo Electuary’s 18 different products in small handcrafted batches of less than 200, that was simply impossible.

As a result, the company has put its production on hold since October. “It feels like a lifetime!” says Mills, who has bided the time waiting for the rules on packaging and labeling requirements to be firmed up. Echo Electuary is now in the process of moving its production to a larger facility in west Eugene, and will resume production of medicated varietal honey in jars.

“Our blackberry honey is the most delicious, and blackberry is what the bees have a lot of around here,” Mills says with a smile. “We also use clary sage honey from Old Blue Raw Honey in Philomath.”

Currently, 12 dispensaries in Eugene carry Echo Electuary products. Mills herself uses the ginger chews to manage menstrual cramp pain, while some of her patients use the medicated honey for relief from cancer pain. “People tell me they use our honey for anti-inflammation, digestion stimulation and anti nausea. Patients have experienced relief from carpal tunnel, broken bones, irritable bowel syndrome and even glaucoma.”

To keep her patients, and her bees, happy, Mills follows best practice standards for her bees — not feeding them sugar water and leaving the bees enough honey for themselves.

“We want happy bees,” she says. 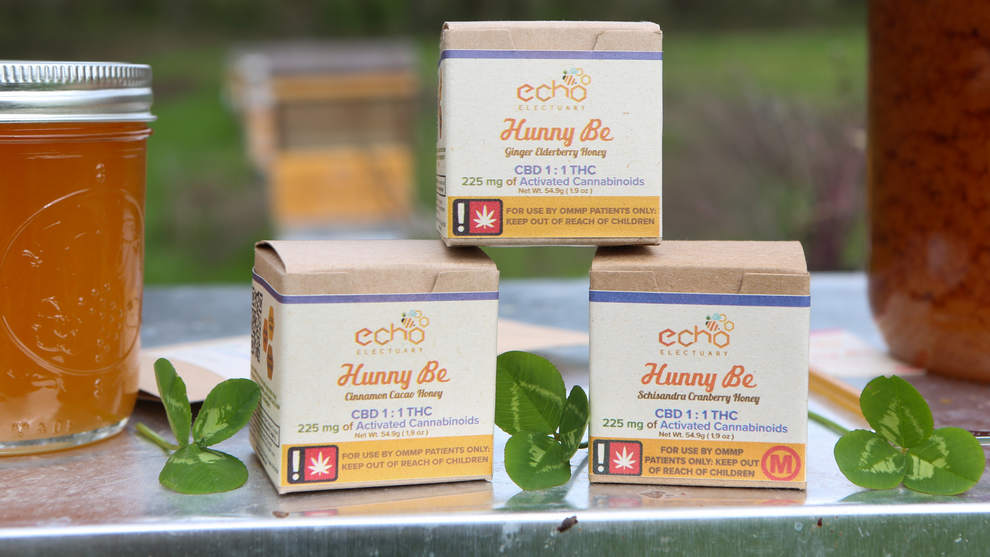 “Honey is a nourishing superfood and it is such a gift for mankind,” says Ross Mills of Echo Elecutary. “It seems so natural to infuse honey with cannabis.” (Kelly Lyon/The Register-Guard)