This was one of two articles I wrote for the Register-Guard’s first-ever special section on cannabis, called Cannabis Culture. It published April 19, 2017. On April 20, 2017, this article had been liked on Facebook 830 times, a record number for one of my articles on the Register-Guard website! Want to watch a short video of Adam Jacques explaining what he does? The published article has a video link. 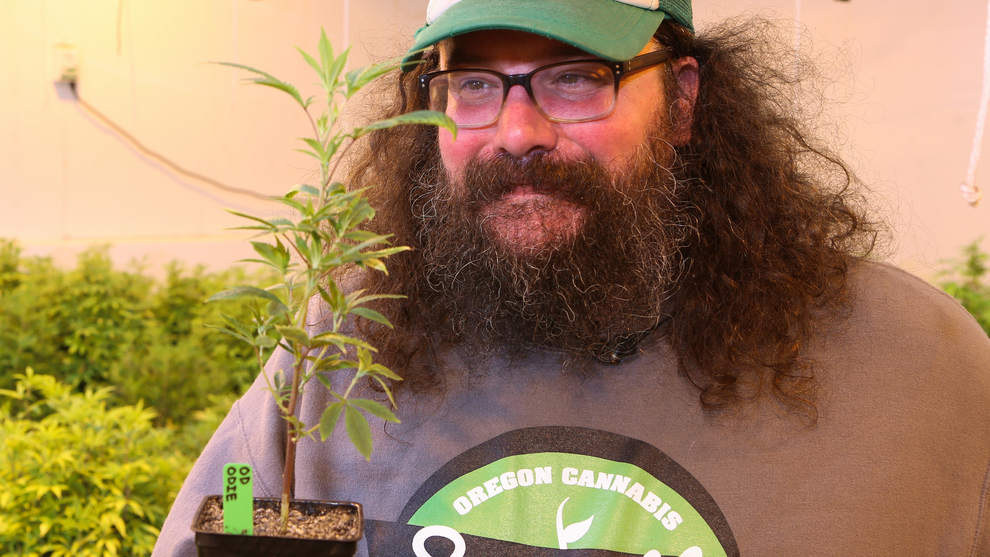 Adam Jacques grows medicinal and recreational cannabis for the west Eugene-based OLCC-licensed shop Sproutly. Through his breeding techniques he has achieved a line of seeds that is 100 percent dominant in cannabidiol, or CBD, the component in cannabis believed to hold medicinal power. (Kelly Lyon/The Register-Guard)

When Adam Jacques of Eugene looks at his cannabis plants, he doesn’t see the Schedule 1 drug as it’s classified by the federal government. He sees medicine.

Jacques is the premier grower in Oregon, if not the United States, for growing plants with the highest known levels of cannabidiol, or CBD, the non-psychoactive component in cannabis that is believed to hold medicinal power.

After years of cross-pollinating high-CBD plants, he has achieved a line of seeds that is 100 percent CBD dominant, something that has not been demonstrated before.

Tests conducted in February by Green Leaf Lab in Portland on 75 of Jacques’ plants showed some plants with a 43-to-1 ratio of CBD to THC. Some of the tested plants showed no detectable THC, the psychoactive component in cannabis.

“I wanted to provide people with an alternative to pharmaceuticals for treating things like cancer or conditions that cause chronic pain,” Jacques says. “When I got started there weren’t plants that were high in CBD that you could just go out and get.”

Sharing knowledge for the good

Jacques grows cannabis for the Eugene dispensary Sproutly, where customers can choose from 20 to 30 flowers and 10 to 15 concentrates, topical treatments and medibles for both recreational and medical use.

His signature variety, Frank’s Gift, was named for Frank Leeds, a friend of his and his wife, Debra Grosella, who was treating his advanced cancer with high-THC marijuana.

“He was getting outrageously high from the THC, but being blasted was not what he wanted,” Jacques says.

Where some growers would have tightly held on to these high-CBD plants, Jacques began giving them away to growers along the West Coast. His generosity with his knowledge, time and effort to help medical patients has been recognized across the United States. In 2016, Jacques received a CannAward for most influential person in the Northwest cannabis industry.

He regularly presents at conventions such as CannaGrow Expo, Science of Cannabis and DispensaryNext on the process of breeding new high-CBD varieties. It’s not an easy thing to do. “When you’re growing a strain that is considered CBD rich you have only a 1-in-4 chance of growing a plant that has any CBD at all,” Jacques explains.

Because the federal government classifies cannabis in the same category as heroin, as a drug with no medicinal value, the scientific research to support the belief that CBD helps sick people simply isn’t there.

But there’s no lack of anecdotal evidence that CBD, in the form of flower for people who want to smoke it, or extracts such as oils, helps greatly.

“There are theories about why CBD works medicinally but no one really knows,” Jacques says. “Cannabis is widely regarded as a neuro-protectant, so it helps people with cerebral palsy, Parkinson’s, multiple sclerosis, cancer, seizures, pain and opioid addiction. People come in to Sproutly all the time and say, ‘I don’t want to get high but I want to cut down on my opioids.’ ”

While the scientific world still needs to catch up, the idea of “individualized cannabinoid therapy” is catching on among growers and patients. This is the theory that every person is different, and that a certain ratio of marijuana’s beneficial components can be combined in a medicinal extract or bred into a flower in just the right way to help that patient — similar to the services that a compounding pharmacy provides.

“I consider breeding like painting,” Jacques says. “The more genetic material you have to work with, the more you can create. If someone wants a strain that is 1:1 (CBD to THC) indica dominant that tastes like grapes, I can do that. At this point I have access to more than 350 varieties of plants each with their own unique phenotype.”

With current laws as they are, it’s practically impossible for Jacques to be able to do this, because each individual therapeutic product would be subject to expensive and lengthy testing.

“It’s unfortunate, and it’s a lot harder to get medicines to patients now than it used to be,” he says. “But individualized cannabinoid therapy should be the future of medicinal cannabis.” 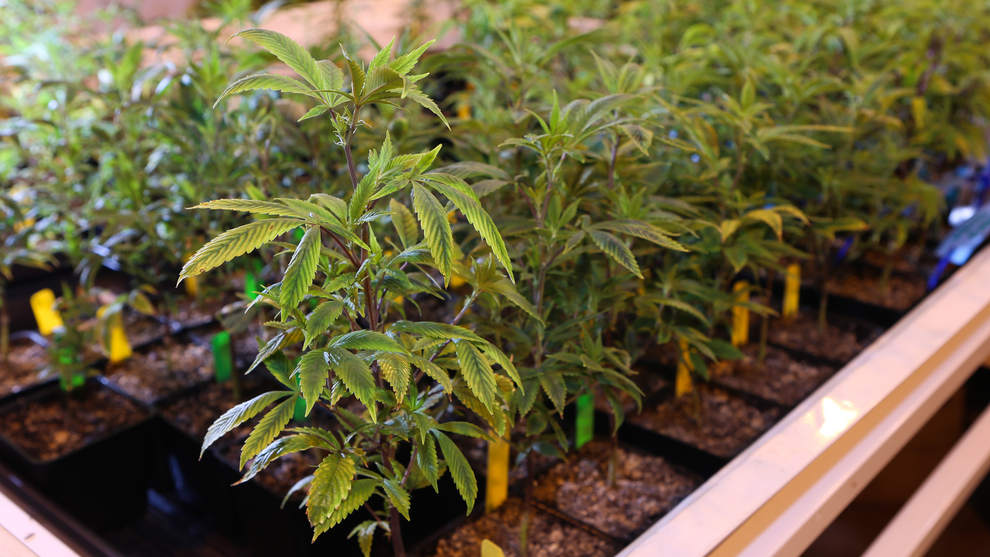 At Adam Jacques’ cannabis farm, plants grow indoors before moving outdoors to be planted in May. (Kelly Lyon/The Register-Guard)