By Vanessa on April 7, 2015 in Eugene Weekly: Chow, Food, Restaurants

This was in Eugene Weekly’s quarterly guide to food and dining, Chow, published April 2015. 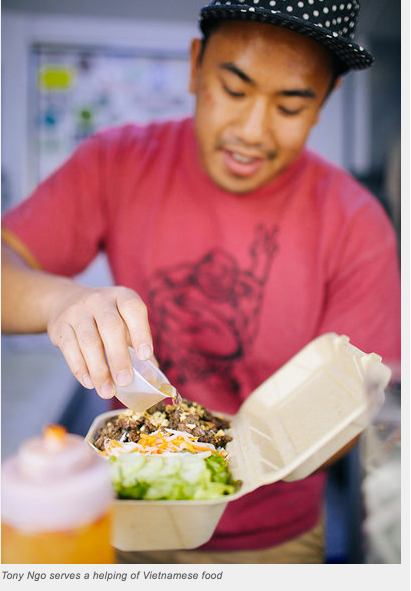 “The term ‘fusion food’ gets used so much nowadays,” says Tony Ngo, co-owner of Da Nang Vietnamese Eatery, which won third place for food carts in EW’s Best of Eugene. “Vietnamese food is one of those organic fusion foods.”

Tony Ngo and co-owner James Ngo (no relation) are long-time friends with families here in Eugene. They opened the Da Nang food cart last May and named it after the city where both of their families are from. Earlier this year both men traveled to Vietnam for six weeks to see family and research food.

“What makes Vietnamese food so unique is it’s influenced by so many different cultures,” Tony says. In particular, France, along with China and Japan, left a mark on the country. “Vietnamese food is really balanced. You get every flavor spectrum — sweet, salty, sour, spicy and bitter. And the other key is it’s really fresh. It’s vibrant and crispy.”

While bread is not common in most Asian countries, a popular Vietnamese breakfast is coffee with eggs and toasted baguette, harkening to the French influence.

Tony and James met through family. About three years ago, the friends began talking about opening a food cart. Both of their families work in the nail salon business, and both Ngos were attending college at the time with no real desire to continue working at salons. Once they realized they shared a vision of serving food, the cart became a reality a short time later.

“In Vietnamese culture everybody is community, everybody knows each other and food is a very big thing,” James says. “With families it’s always about dinner at the table. It doesn’t matter how old you are: When it’s dinnertime, you’re at the table. That’s how people get together.”

Tony says he grew up shadowing his mother in the kitchen, and food service made sense as a way to put his business minor degree into use.

The pair took advantage of the winter lull in the food cart season to fly out on New Year’s Eve to their families’ hometown of Da Nang, a large port city in the country’s center. It was the first time either of them had been there without their families and the first time since they were young teenagers.

“We definitely did a lot of eating!” Tony says. “My cousin owns a bakery and sells bánh mì sandwiches. My auntie owns a bánh mì cart that you would see on the stoop. I got to hang out with her for a couple of days and watch how she does it.”

Another aunt sells a noodle soup called mi quang, also from a cart. It’s quite common for restaurants or individuals to prepare and serve only one signature item.

This notion of specialization helped shape their menu. They offer a minimal selection of four different entrees — rice bowl, noodle bowl, salad or sandwich — and three proteins — tofu, steak or chicken. “When we were starting up we thought if we did less things, but we did them really well, it would be better than trying to offer a wider array of things that weren’t as good,” Tony says.

James says the entrees are similar because they can all be topped with a fresh combination of pickled veggies, cucumber, mint, lettuce, sprouts and cilantro and other garnishes and a house blend fish sauce, but the options are versatile. “We definitely have people who get hooked on one combination and stick to that, and we have people who try every combination,” he says.

It’s the fish sauce that trips most people up. “The ‘holy trinity’ of Vietnamese cuisine is garlic, lemongrass, Thai chilies and fish sauce,” Tony says. “That’s the thing that scares people. But fish sauce is very sweet and savory and helps tie everything together. It’s almost like a vinaigrette, and just balances it all out.”

They source ingredients locally as much as possible, except for the bread, which they get from a Vietnamese bakery in Portland. They haven’t yet found a local baker willing to make the Vietnamese baguette to their strict specifications, so for now it’s twice-weekly deliveries.

They’re reluctant to serve sandwiches once the bread is past its prime, but judging from the positive Yelp reviews, even the occasional dry bun doesn’t dampen their patrons’ enthusiasm for this cart’s small menu with big taste.

The cart is closed on Tuesdays and Thursdays and rotates between three other locations in the Whitaker neighborhood. Tony and James suggest following the cart on Instagram or Facebook, or downloading the Eugene Street Food app to find them wherever they happen to be.