I got to interview the group of women who raise guide dog puppies for the blind for two publications, the Register-Guard’s Dash special publication and Spot Magazine. These trainers spend a huge amount of time making sure the puppies are good citizens. They are the best-behaved dogs I’ve ever met, and the people who receive the trained dogs are truly grateful for how the relationship with the dog will change their lives. 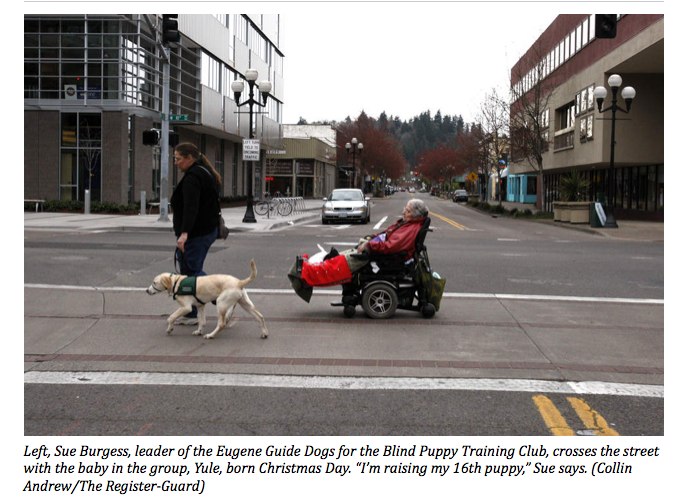 Florida sat cross-legged in the coffee shop, barely raising an eyebrow when patrons came and went. She occasionally moved a paw and breathed deeply a couple of times. But otherwise, she kept quiet and kept to herself, which was exactly what she was supposed to do.
Florida is an 8-month old, thick-furred, buttery yellow cross between a lab and golden retriever, about a third of the way through her training to be a service dog. She’s the fourth puppy that Louise Hackett has trained to be a guide dog through the organization Guide Dogs for the Blind. After about 10 more months, Louise will have to say goodbye to Florida, and that’s not going to be easy. “But the dogs have a higher calling,” she says.
Training a puppy is always a difficult and time-consuming endeavor, but the ladies of Eugene’s puppy raising club approach sainthood. Just as they get the puppy through the period of trying behaviors, they give them up. But the dogs’ visually impaired partners are so grateful, it makes the sacrifices worthwhile. “You just can’t imagine how grateful they are,” says Marsha Miller, who’s training a year-old black lab named Victoria. “They can’t imagine that you would take this dog and raise it and then give it to them, and they’re so overwhelmed with how it’s going to change their lives.”

Marsha began training guide dogs in 2008. Her daughter works at Guide Dogs for the Blind as a trainer, and told Marsha that a dog she had trained was going to graduate. “It was the first time of my life l that I hadn’t had a full-time job outside of the home,” she says. “I was looking forward to something fulfilling to do with my time so I went to one of the graduations. It was so moving. I decided that it was something I wanted to be a part of.”

Louise grew up with animals on a ranch in Montana. “I didn’t feel whole unless I had animals, preferably horses,” she says. After retiring, her and her husband, Lewis, moved from California to an 18-acre farm near Cheshire 5 years ago. It was nice, but Louise, too, sought something more fulfilling. She still rides horses daily, but Florida and the other puppies have burnished the satisfaction she gets from everything else. At 79, Louise’s only worry is that she won’t physically be able to train dogs for much longer. “I’ll do it until I physically can’t do it,” she says, “but I don’t know what I’ll do without it.” (Louise’s mother is 104, so she’ll likely have many more years to train many more dogs.)

Sue Burgess, the leader of Eugene’s Puppy Club, began raising guide dog puppies in the 1970s, raising three while in high school. Her children eventually grew up and didn’t need her as much anymore, and that memory of raising guide dogs called to her. “I just really believe in volunteering,” Sue says. “I looked into the training again and got involved in 2002. I’m raising my sixteenth puppy.”

When the Guide Dogs organization has enough trainers and puppies to match, they transport the pups up I-5 from San Rafael, Calif., and arrange for their trainers to pick them up. The trainers do what anyone would normally do for a puppy—housebreak them, socialize them, teach them obedience and manners—but they have higher expectations. “Our training is pretty strict,” says Sue. “The end result is they’re going to be a guide for a visually impaired person, so I want their manners to be very, very, very good.” That means no running in the house. They can’t get too rowdy. Being distracted by squirrels, cats, birds, Frisbees or bouncing balls is not allowed. The dogs need to be 100% focused on their blind partner. This training takes daily work, both at home and out and about. The Puppy Club meets weekly to take their small charges out—to the grocery store, on the bus, to the library. The dogs are the trainers’ constant companions. Sue says that to get involved people don’t need any special training or prior experience, other than, perhaps, common sense. The organization provides a thorough manual on what is allowed and what is not. “We train our people,” she says.

Once their behavioral goals are achieved, the puppies have to move on. “When they’re at that age, the organization sends us a letter that it’s time for them to come back to their training campuses,” says Sue. “When you get that letter that’s the worst part.” Once back at either the California or Boring, Ore. “college” campuses, the dogs undergo personalized sessions with their blind partner and an 8-phase training schedule to learn how to maneuver in their harnesses.

After that, the dogs are presented to their blind partners at the graduation ceremony, and may end up anywhere in the United States or Canada.
“It is hard because they become a part of your family,” says Marsha. “But knowing where they’re going and knowing what their purpose is and actually getting to meet the person that they’re going with makes it much easier for me. I don’t look at them as my pets. I’m taking care of them and teaching them what to do to do their jobs.”

Graduation is always very emotional, says Sue. “That’s when it becomes worth it, when you see how much that person needs that dog,” she says. “They’re changing a life; they’re keeping someone safe.” 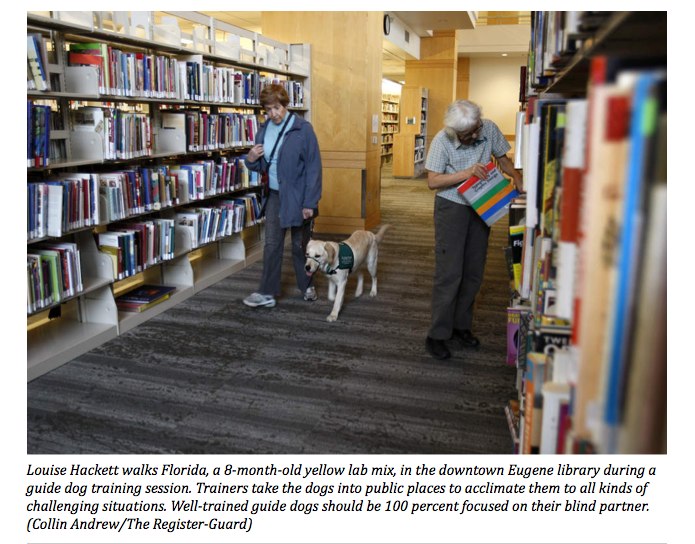