By Vanessa on March 5, 2015 in Boomer and Senior News, Home, Retirement, Seniors

This was published in February 2013 issue of Boomer and Senior News. 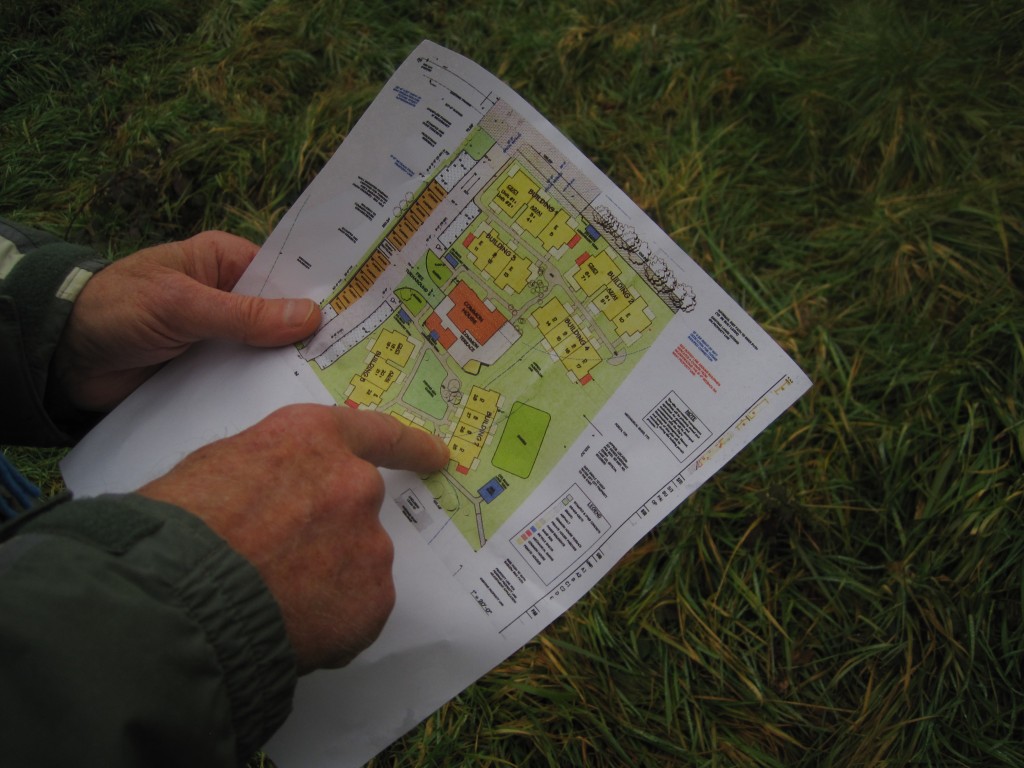 R.C. Cross points to one of the buildings in the site plan for Oakleigh Meadow Cohousing. Photo by Vanessa Salvia

Community By Design
The cohousing concept catches on in Eugene

If the word “cohousing” makes you think back with unpleasant memories about sharing your cramped college dorm with a noisy, messy roommate, wipe that notion from your mind.

Rather than living in close quarters, cohousing encourages shared resources, public and private living space, and a community designed with intention. A cohousing community is a group of people of all different ages who agree to share a neighborhood. You get to know all of your neighbors, make important decisions as a group, share meals, share social activities, and share the labor involved in maintenance.

Laura Fischrup, a Eugene woman who is interested in cohousing, found out about the concept from a friend who was involved with a cohousing community in Bainbridge Island, Washington. “She spent a lot of time going to a lot of meetings but once it was all built she absolutely loved it,” says Fischrup. “When I would go up and visit her I would be like, ‘Wow, this is great!’ They were great homes and she knew everybody that lived there.”

The cohousing idea originated in Denmark and was popularized in the 1980s. Now, there are successful cohousing communities all around the world, including the United States. But surprisingly, none have taken hold in Oregon. A group called Oakleigh Meadows Cohousing hopes to change that.

Oakleigh Meadow is a 2 1/2-acre privately owned plot of land near River Road in Eugene. Part of it abuts a greenway and bike path along the Willamette River, part of it abuts Oakleigh Lane, and part is next to an ancient filbert orchard that is a small City of Eugene park. Twelve members, including couples and families, have committed to buying a home in Oakleigh Meadow when the project is complete. Members pay dues to join, and after 6 months they can choose to become fully committed members or not.

R.C. Cross is an active member of Oakleigh Meadows Cohousing who has committed to a 3-bedroom home in the Oakleigh Community as soon as everything is in place. The plans call for 28 individual dwelling units with 2-, 3- or 4-bedrooms, and a 3,000-square-foot common house. Cross explains that the common house will provide parking spaces, mailboxes, a shared kitchen, bicycle storage, rec rooms, laundry rooms, and a nice porch where residents will feel comfortable just hanging out. “You have privacy in your unit, but you’re encouraged to communicate with your neighbors,” Cross says. Residents will share landscaping tasks, gardening and other maintenance tasks. Residents will sign up to cook on certain days. “So you come home to a prepared meal three or four times a week,” he says. The asking price for the 2-bedroom home is $210,000, while the 4-bedroom is $380,000. The 3-bedroom will be in between. While that may seem steep, Cross reminds everyone that they get a share of the common house as well, that they can use whenever they like.

Cross, a retired cabinet maker, has lived alone for some time now and has a daughter who is also looking to live in Oakleigh Meadow with her child. “I live by myself,” he says, “I have neighbors I don’t really know. I’m looking forward to really getting to know my neighbors, and my daughter is looking forward to having a meal without cooking it! We’ve also talked about having daycare for kids and carpooling. There are a lot of advantages to living like this.”

Cross, the oldest member, is active and fit for his age, and bicycles and canoes whenever the weather permits. He’s anxious to be living right on the bike path circling the river where he currently rides almost daily for exercise. “I’m looking forward to getting a canoe in there and paddling around and then pulling it into my backyard,” he says.

Fischrup happened to be out one day and saw a woman with a button on her jacket that said, ‘Ask me about cohousing.’ “I said to her, ‘Is there cohousing in Eugene?’ and she said there was.” Fischrup was invited to the Oakleigh Meadow site for a visit the next day. That was in February of 2012, and Fischrup, is now committed to her home in the community, though she can’t decide between the 2- and 3-bedroom model. “What I like about it is the idea of downsizing and being able to share the resources,” she says. She also says she looks forward to having a group of people she can talk with, and do things with. “I tend to be more of an introvert by nature. It’s not that I don’t like to do things with people, just that I don’t necessarily initiate doing things.” To her, cohousing seems like a healthy, easy way to engage with people socially. “If I want to I can walk out my door or walk over to the common house and see if anybody is going to a movie, or going for a walk around or bike ride. It would be easy to make contact with people, and not with just anybody but with people that I’ve already gotten to know and we have this common bond of building this community together.”

Fischrup says that days go by when she may not ever see her current neighbors. “We’re all pretty busy living our lives, getting in our cars,” she says. “The Oakleigh Meadows community seems like a great way to live and eventually retire.”

The group hopes to break ground in spring of 2014. First though, they have to find at least 20 committed members in order to secure a bank loan. The planning and recruiting process has taken time and effort, and though they have many supporters, Oakleigh Lane neighbors are not keen on the idea of a development being allowed in their neighborhood. “There’s opposition,” Cross acknowledges. “It’s too much of a change for them.” Neighbors have appealed the permission of the Oakleigh Meadows development. The appeal was denied. “We’re optimistic,” Cross says. “A lot of people in the River Road area think it’s a great idea.”

So for now, the group is proceeding with the hope that their neighborhood will be built just the way they want it. They are recruiting a developer and are finalizing the building plans, which will be submitted to the City.

Once approved, the members will inch slowly forward in designing their neighborhood. Oakleigh Meadow Cohousing members might not have all the answers, but they certainly want their idea to work and they believe it can.

For information about Cohousing
http://www.cohousing.org/ 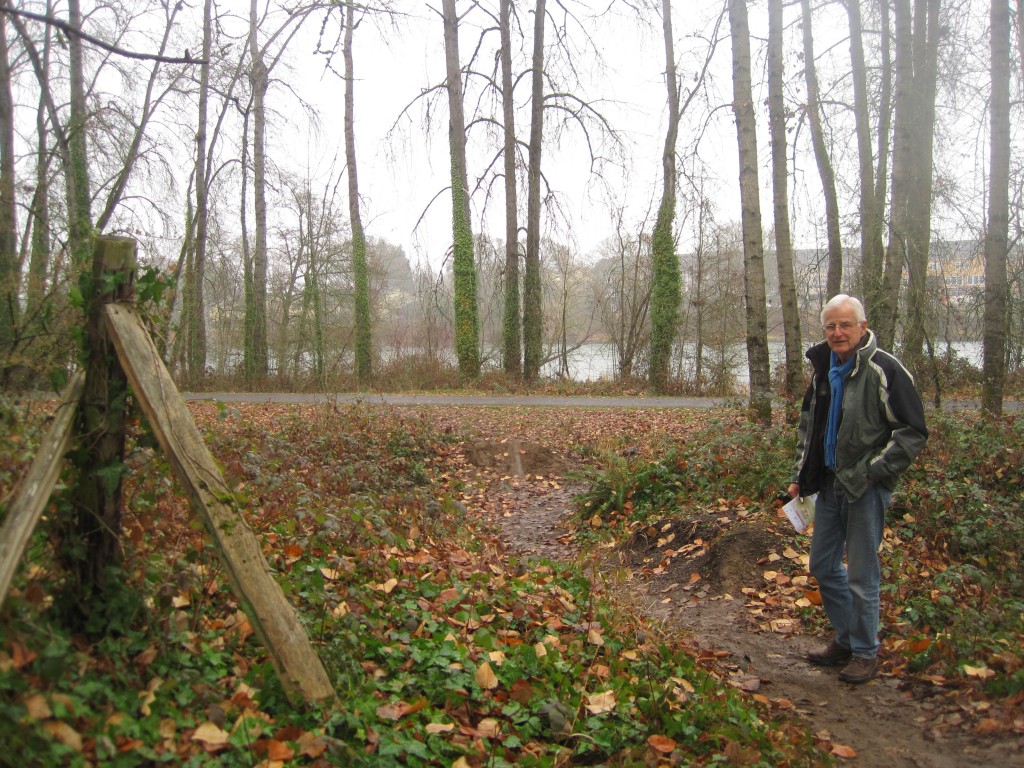 R. C. Cross stands near the bike path that encircles part of the site for Oakleigh Meadow cohousing. The Owosso Bridge is located to the left. Photo by Vanessa Salvia

One Response to Oakleigh Meadows Cohousing is Community By Design