This was the first story that I wrote for the Register-Guard’s Tastings special section, back in March 2013. Tastings publishes quarterly and is all about local food. I visited the charcuterie at King Estate Winery outside of Eugene and got a master course in making corned beef. I was so impressed that I went home and made my own, and it really is easy. I had made Reuben sandwiches for my family before, but making them this time with homemade corned beef, my own homemade sauerkraut and my own dressing (I didn’t make the rye bread, alas), was a taste sensation. Now, my family isn’t even interested in other Reubens unless at least 2 of the 4 major ingredients are homemade. 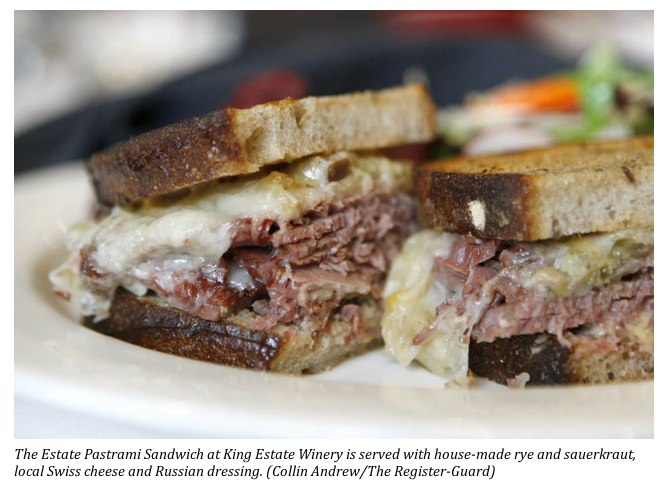 Come March, winter’s been gnawing at our bones for too long. We’re ready for spring’s warmth, and St. Patrick’s Day on March 17 offers the promise of just one more wintry holiday before the sun starts to strengthen. The signature dish of St. Patrick’s Day, corned beef, offers one last chance to steam up the kitchen with a rich cut of meat coupled with hearty winter vegetables. And if you can boil water and handle a knife, you pretty much have all the skill it takes to make a delicious corned beef at home. Take it a step further by smoking the corned beef, and you have pastrami.

The word corn derives from the Old English word cyrnel for seed, or kernel, which was used to describe any small particles or grains. In this case, the corn refers to the grains of salt used to cure the beef. Evidence of salt-curing meat and fish is widespread in many cultures, from North Africa to Southern China, Europe, Russia, Scandinavia, and throughout the Arctic. People living near the world’s oceans long ago noticed that salt draws water out of food and inhibits the growth of microorganisms. They ate salted beef for survival; we eat it because it’s delicious. “You don’t have to be a genius to do this,” says Tim Bass, charcuterie manager for the restaurant at King Estate Winery. “It’s just good cooking.” Bass’s kitchen produces all of the fresh, salted and smoked meat products used by the restaurant. All of their meat products come from Eugene’s Long’s Meat Market, which procures its free range grass fed beef from local farmers at Knee Deep Cattle Company. “High quality meat is going to make a world of difference in the flavor,” Bass says.

Long’s offers two versions of corned beef . . . a Boar’s Head brand corned beef that is ready-to-eat, and a pickled version that is ready to be finished at home. If you’re feeling even the slightest bit adventurous in the kitchen, and you have a largish pot and baking tray, you’re all set.
Long’s butcher Val Ross explains that corned beef can be made from two cuts of beef, either a brisket or a round. The brisket overlies the ribs, while the round is from the cow’s tail end. There’s not much difference in price, as both cost about $4 per pound, or in taste. The difference is in the amount of fat and the size of the cut, which affects the time it takes to corn. Prepared rounds are about 20 pounds; briskets, about eight pounds. “If you’re making it with a round the brining process is going to take about 10 days,” says Ross. “For brisket it’s six to seven days because it’s not as big. Most of the time, commercial corned beef that you find is brisket.” Both relatively inexpensive, sturdy cuts of meat are profoundly transformed by the brining process. They become moist, tender and flavorful, perfect for the classic Reuben sandwich, the breakfast dish of corned beef hash, or for boiling with potatoes and cabbage for a warming late winter St Patrick’s Day feast.

For Long’s customers finishing the beef at home, they’re sent off with a handful of pickling spices. Once the meat is home, bring a large pot of water to a boil and throw in some of the pickling spices. “Boil it about 30 minutes per pound,” says Ross. “Boil it for 15 minutes, then pour off the water and add fresh water for the remaining cooking time. If the meat is too salty that will get rid of it.” Ross advises to plan to serve 1/2 pound per person, or more if you want leftovers.

To ensure that the brine reaches the interior of the largest rounds, Ross injects the brine solution. If the solution doesn’t reach the interior, it’s still fine to eat, but you’ll most likely end up with a “ring” in the meat, showing a change in color where the brine didn’t penetrate.

King Estate serves a hearty corned beef sandwich on house-made rye bread, with house-made sauerkraut, French dressing, side salad and crunchy beet chips. To keep the restaurant supplied, Tim Bass has to start making the corned beef about five days before they need it. Bass recommends that you gather all of your ingredients and equipment before beginning. “Otherwise it gets chaotic,” he says.

For a 5-pound brisket you will need 1 gallon of water, salt, white sugar, brown sugar, honey, pickling spices and an optional ingredient called pink salt. This mixture of sodium nitrate and salt is sometimes called Insta Cure, and is used to prevent the meat form turning grayish. “It is mostly used in professional kitchens so if you can’t procure it you can certainly leave it out,” says Bass.

After the brining process, which takes 4 days, the meat is ready to be combined with cabbage, potatoes, onions, carrots and an extra handful of pickling spice if you wish. Boil it with the veggies for 3 to 4 hours, thinly slice it against the grain, and you’re ready for your mid-March feast.

Pastrami is simply corned beef that’s been coated with coriander seeds and black pepper and smoked. Use your smoker or your charcoal grill and smoke the cured beef over hickory for about 4 hours. After that, reheat the meat gently in liquid until it is falling apart tender.

Whisk all ingredients into the water and simmer until salt and sugar are dissolved. Remove the post from the heat and cool the brine completely in the refrigerator.

Once cool, place the meat in the brine in a non-reactive container and keep it submerged for 4 days. Weigh down with a plate or other non-reactive lid if necessary.

After the fourth day, remove the brine, rinse it completely in cool water and pat it dry. At this point, it is ready to be boiled with the vegetables, or sliced for sandwiches. Before storing the meat in the refrigerator, wrap it tightly in plastic wrap so it doesn’t pick up odors.

For pastrami, smoke the brined beef using a smoker, a charcoal grill or your oven. This technique uses a layer of charcoal briquettes upon which wood chips are placed to allow them to smolder. Replace the briquettes and wood chips as necessary to continue the smoking process. The beef should reach an internal temperature of 150 degrees Fahrenheit.

After smoking, braise the pastrami in a shallow pan with enough water to halfway cover the meat. Cover with foil and allow to cook for a couple of hours, until it is meltingly tender.

There are many variations on pickling spice blends, and the quantities and spices can be varied according to your tastes. 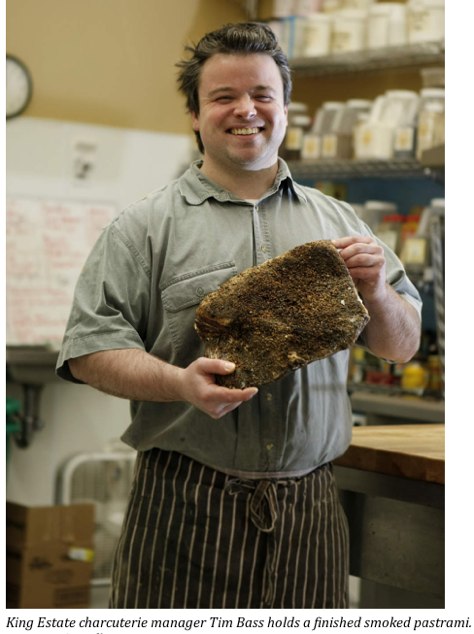 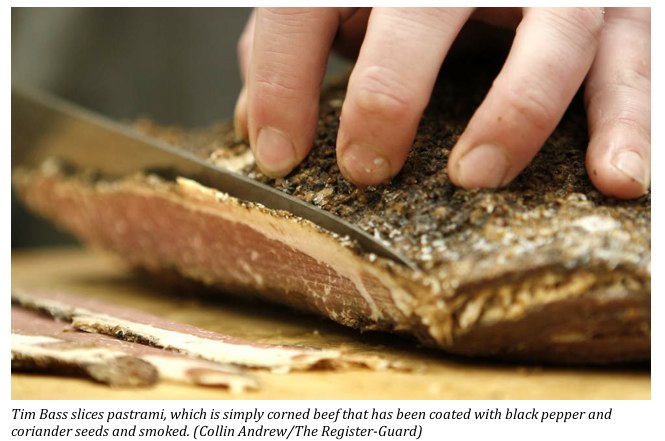