This appeared in the February 2017 issue of Northwest Boomer and Senior News, Lane County edition. Roger Beck was one of the earliest people in our area to live in a house truck, in fact, he wrote an early book on one! He sold jewelry from the back of his truck and made a good living. Now, he’s a skilled woodworker and uses some of his scraps to make these beautiful wooden “lace” lamps.

Roger Beck’s creativity with wood shines through, despite his Parkinson’s disease. 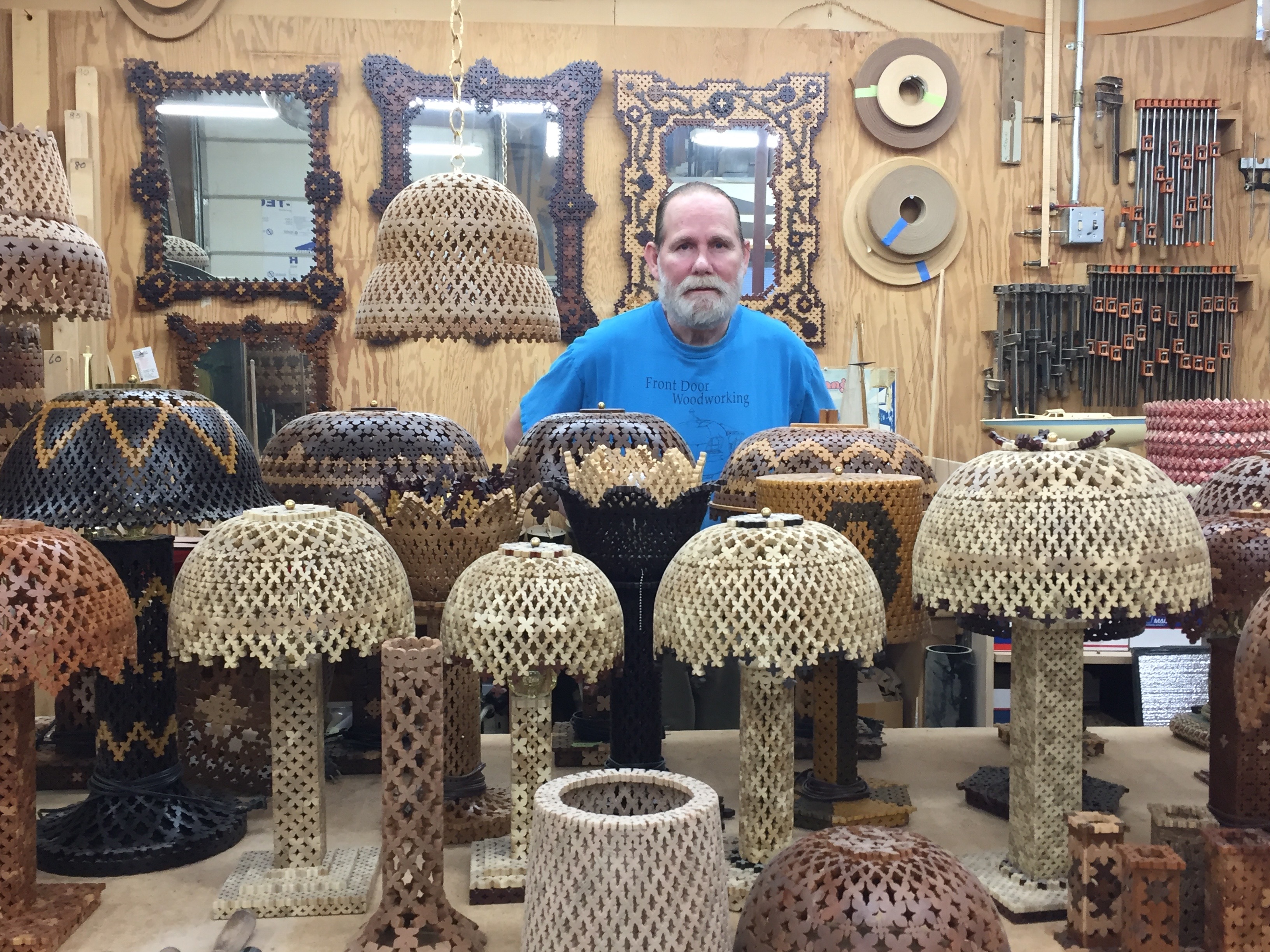 Roger Beck and his lamps made from “wooden lace” — wooden tiles he glues into lamps and other objects. Photo by Vanessa Salvia

Roger Beck has 4,000 square feet of space in his wood shop but only 248 square feet in the housetruck he used to live in. He doesn’t move around very quickly, though, because his Parkinson’s keeps him somewhat off balance. One section of his woodshop is devoted to lamps fabricated out of small wooden tiles glued together, a past-time which Beck considers therapy for his Parkinson’s, because of the fine motor skills they take to create.

Dealing with Parkinson’s and mastering a new skill three years ago at the age of 67 when he started making the lamps is just the latest chapter of the interesting life Roger Beck has led. “I’m a wild and crazy guy,” says Beck with a wry laugh. You know he’s not really joking.

Although he still has the 1952 Federal 5-ton housetruck parked in the side yard of his woodshop, he and his partner, Ruth Wilday, live in an actual house now. After years of living out of his housetruck—one of four he built within the late 1960s and ’70s—and supporting himself by selling stainless steel wire jewelry, Beck settled down in Eugene to start a family.

He was born in Los Angeles and first worked in that city’s movie studios, helping to build movie sets. Even then, though, his anti-establishment attitudes caused him some drama. He helped create sets for movies like “The Great Train Robbery” and “They Shoot Horses Don’t They?”, but the older guys didn’t like his pony tail—which he still has.

He left the hustle of Southern California with a plan to head to Canada—where he felt he’d be more accepted with his pony tail than in Mexico, and he had no desire to head east. He lived out of his series of housetrucks, each one bigger than the next, and supported himself by selling handcrafted wire jewelry. Beck sold at the Oregon Renaissance Fair, which went on to become the Oregon Country Fair. He even sold at the first Saturday Market in 1970.

Beck traveled around the northwest, attending fairs and festivals and by all accounts making a good living—he could sell $1,000 or more of merchandise in a single weekend, then have little overhead other than food and gas to get to the next city. Along the way, he documented the other housetrucks and converted buses he found.

Although he was not a technological guy, in 1999 Beck purchased a computer and taught himself how to use Photoshop. He laid out photos of his housetrucks and the best of others he had encountered and in 2002 self-published a book, entitled “Some Turtles Have Nice Shells.” The book contains 187 pages of housetruck pictures and stories and is still considered mandatory reading for those in the tiny house movement. Beck had 4,000 copies printed, and has since sold all but 900 of them to people all over the world.

He still has his wooden case he built to hold his wire jewelry, although it rarely gets opened anymore. His jewelry and his housetruck lifestyle led him to be part of the
Lane County Historical Museum’s 2010 exhibit “Tie Dye & Tofu,” which was about life in Eugene during the ’60s and ’70s.

When Beck first settled in Eugene, nearly 40 years ago, he took a job at a cabinet shop, working for someone else and perfecting his trade. After six years of working at that shop, he opened his own, which is where he’s spent most of his time over the past 30 years, and 25 years in the shop where he is now. A year and a half before the marriage failed, Beck accidentally took off his wedding ring finger and his left pinky finger with a table saw. Although he and Wilday have yet to marry, they’ve been a committed couple for 24 years now. They met in pre-Internet days through a dating service, and decided that after both of their marriages had failed, they didn’t need another piece of paper to prove anything.

Somewhere along the way, Beck had made a placemat out of wooden tiles. “I had forgotten about it for years,” he recalls. “I put it away because it wasn’t flat. It had rolled up and I didn’t think I could do anything with it.” Three years ago he found that placemat again when he was searching through storage, but this time, he saw it in a new light.

“I had an ‘a-ha’ moment,” he says. “I wondered what else I could do with these tiles.” Through some trial and error he developed a system of taking wooden scraps from his cabinet business and routing them to create either rounded or pointed edges in different sizes. He tapes together the shaped pieces and then saws them into pieces about the thickness of a wooden Scrabble tile.

“I don’t know why I started wanting to work with the tiles,” he says. “I just did. I took an old bowl and glued some of the tiles onto it to make a lampshade.” He hasn’t stopped making them, and now has had a gallery showing of his lamps and a permanent for-sale selection of his lamps at Brighter Homes, a lamp store in Eugene.

He uses thrift-store colanders, mixing bowls, paint cans and flower pots to make shades of various sizes and shapes. “Every thing I can come up with to give me a different shape or size,” he says. After making a starting point, Beck sketches out the geometry of the shape to make sure he ends up with even rows.

The lamp shades are surprisingly tough. You can squeeze them with no harm done. “You can’t drop it though,” Beck says with a laugh that comes from experience. “Then it’s just like an eggshell. You get the rigidity out of the dome shape and they actually hold up really well.”

The bases are also made from the tile, in either rounded shapes made from gluing tiles to PVC pipe or squared off, mitered shapes. He’s even made floor lamps. Other tiles become vases for dried flower arrangements, picture frames, large wall mirror frames, coasters, wall sconces or clock faces. Long wooden strips from the cutting are glued together to form colorful clipboards.

When he first started making the lamps, he hand-sanded each piece, then quickly realized that would not be a good use of time. Wilday came up with the idea of putting the tiles in a cloth bag and shaking them. They figured out that tying up the tiles in a pillowcase and putting them through the spin cycle of a washing machine does the trick. Once the lamps are done, he sends them to a local shop to be lacquered.

Each of Beck’s lamps contains 500 to 2,000 individual pieces of wood in colorful combinations such as vermillion, yellow heart, purple heart, wenge, ash, zebra wood, red oak, white oak, cherry, maple, walnut, alder, ebony and Brazilian cherry. One large vase made from a flower pot shade holds 14 different species of wood in as many colors in a circular pattern. When alight, the shades throw beautiful patterns on a wall reminiscent of light shining through wooden lace. The tedious nature of making the lamps has turned out to be a blessing, because Beck believes his motor skills have stayed strong despite the Parkinsons’s diagnosis seven years ago.

“I look at the lamps as physical therapy because I have to do the fine detail,” he says.

Now 70, Beck is trying to retire from the cabinet business, and hopes that the lamp making is what he can soon focus on.

Still, he’s not in a huge hurry to give up his cabinet business, which employs him and two others. He enjoys talking about his tiny parrotlet named Nickel who used to fly around the woodshop office until it recently died. The woodshop office also houses his large collection of heavy-gauge stamped steel cars, airplanes, trucks and boats, and a smaller collection of metal tins that once held zinc oxide tape. “Zinc oxide tape started out as adhesive plaster tape which was made in 1887 and used to come in these tiny metal tins,” he says. Remember when he said he was a wild and crazy guy?

He has six or eight contractors who utilize his services for their new home constructions and he takes business from referrals. “I promote myself as an artist who is a woodworker who builds cabinets because they pay the bills. But the cabinetmaker doesn’t cut corners because the artist won’t let him. I’m very proud of how I put my cabinets together.”

In addition to cabinets, he can custom-fit silverware drawers, plate racks and anything made out of wood. “I like the challenge of round things,” he says. “I get bored with square cabinets.”

At this point, the lamps aren’t moneymakers for Beck. Although the wood is mostly scraps, each one costs about $75 in materials alone. He puts a lot of time into them and asks for a price from $250 for smaller lamps to $500 for large specimens. He’s sold only three so far, but hopefully more will be sold once more people learn about his lamps. He’s also working on improving his website for both the lamps and his housetruck book so that more people can find him easily and buy online.

He’s had a successful career. “One feather in my cap is making the wooden window shutters at the Shedd,” he says, about the large windows of the venue in Eugene that was once a church. “I love building things, but there are two things that frustrate me with this Parkinson’s and that’s my balance and my walking. I want to build things as long as I can because I know someday I won’t be able to because of my Parkinson’s. The longer I can keep myself doing things the better. If you just stop doing things you stiffen up and die. I’m going to fight it as long as I can.”

Resources
www.housetrucks.com
Find out more about Roger Beck’s housetrucks and his book, “Some Turtles Have Nice Shells”

www.thewoodenlampcompany.com
Not in service yet but it Roger plans to develop it so more people can find his lamps. 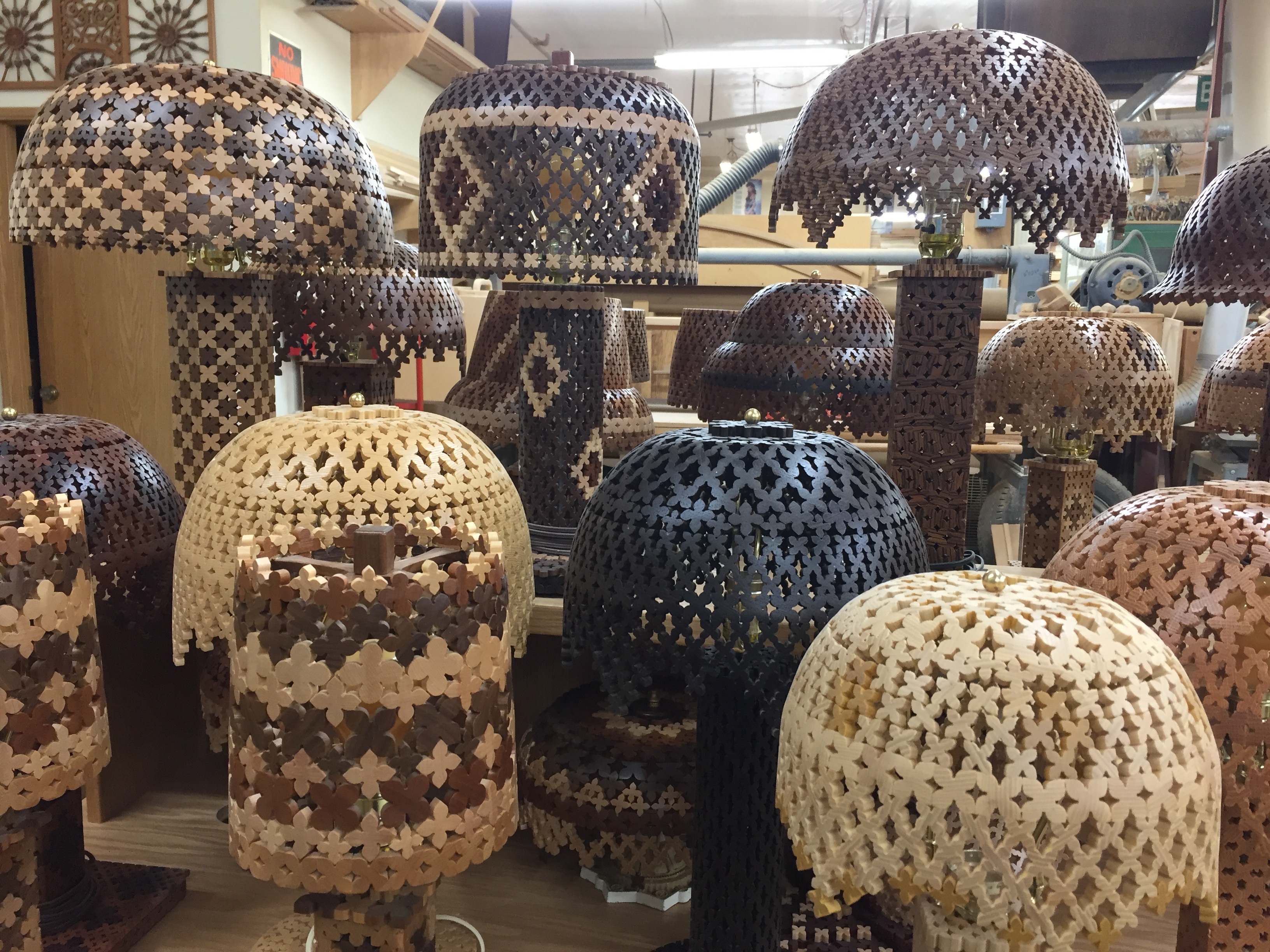 The many different colors of the tiles are from the different types of wood Roger Beck uses, from ebony to zebra wood. Photo by Vanessa Salvia