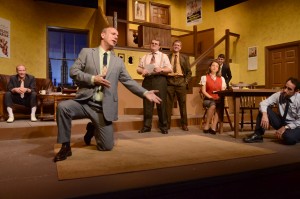 A scene from Neil Simon’s “Laughter on the 23rd Floor” at Very Little Theatre.

The Very Little Theatre may be “very little” in size, but it is big in what it offers.

Five plays will be presented during the theater’s upcoming season, its 86th year. The 2015 season, billed as “The Cutting Edge,” promises to present an exciting mix of Pulitzer Prize- and Tony Award-winning shows with blockbuster production designs and compelling stories.

VLT presents a series of shows on its 216-seat Mainstage and a couple of performances at the smaller Stage Left space, a venue where new directors and playwrights can showcase their skills.

Coming up Oct. 10-25, Mainstage has “Private Eyes,” a comedy in which the audience plays the role of detective.

“Other Desert Cities,” directed by Claude Offen­bacher and on stage Jan. 16-31, is a contemporary drama-comedy about a young woman returning to her family at Christmastime after a long absence with some eventful news.

“A Funny Thing Happened on the Way to the Forum” follows in March and April. The Tony Award-winning musical by Stephen Sondheim tells the bawdy story of a Roman slave named Pseudolus and his attempts to win his freedom by helping his young master woo the girl next door.

In the comedy “Superior Donuts,” running from May 29 to June 13, Arthur owns a rundown doughnut shop in the Uptown neighborhood of Chicago.

“Anne of the Thousand Days,” a historical drama retelling the dramatic relationship of Henry VIII and Anne Boleyn, wraps up the season from July 31 to Aug. 15.

“Sight Unseen,” about a celebrated American artist in London who reunites with his former lover and muse (April 24 to May 3).