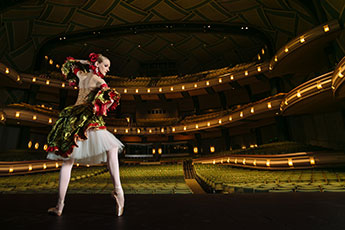 The crown jewel of Eugene’s performing arts scene is the municipally owned Hult Center for the Performing Arts.

The Hult Center has been attracting a roster of celebrated comedians lately, and that trend continues with David Sedaris on Nov. 20 and Brian Regan on Jan. 8.

Sedaris is a modern master of satire who has no trouble taking his written material and making it funny for an audience. The audio version of his book “Let’s Explore Diabetes With Owls” was nominated for a Grammy Award for best spoken word album.

Theater League presents national Broadway tours and professional touring productions to eight communities across the country, including Eugene. “Memphis,” on stage Feb. 23-24, explodes off the stage with dancing, soulful songs and a tale of fame and forbidden love.

Foodies will find the appearance by Alton Brown on Feb. 25 irresistible. Brown became known for putting the “ooh” into food, blending both well-tested recipes and the science of why they work.

The two-hour show promises to make audience participation mandatory and will feature his stamp of quirkiness on stand-up comedy, food experimentation, talk show antics, multimedia lecture, and, for the first time, live music.

Be sure to request a seat in the “poncho zone.”

Closing the 2014-15 season for the Eugene Ballet Company on April 11-12 is the legendary story of the “pinball wizard,” as conceptualized by the rock group the Who back in 1969. Having grown up in England, Artistic Director Toni Pimble brings a deep understanding of the post WWII era of mods and rockers to her original choreography for this performance of “Tommy.”

The Eugene Ballet Company regularly performs throughout the Western states. Since organizing in 1982, the company has staged well in excess of 1,000 performances in 32 states and eight countries.

“The ballet is used to traveling, but we always love the Hult Center,” says Managing Director Riley Grannan.

Where: Seventh Avenue and Willamette Street